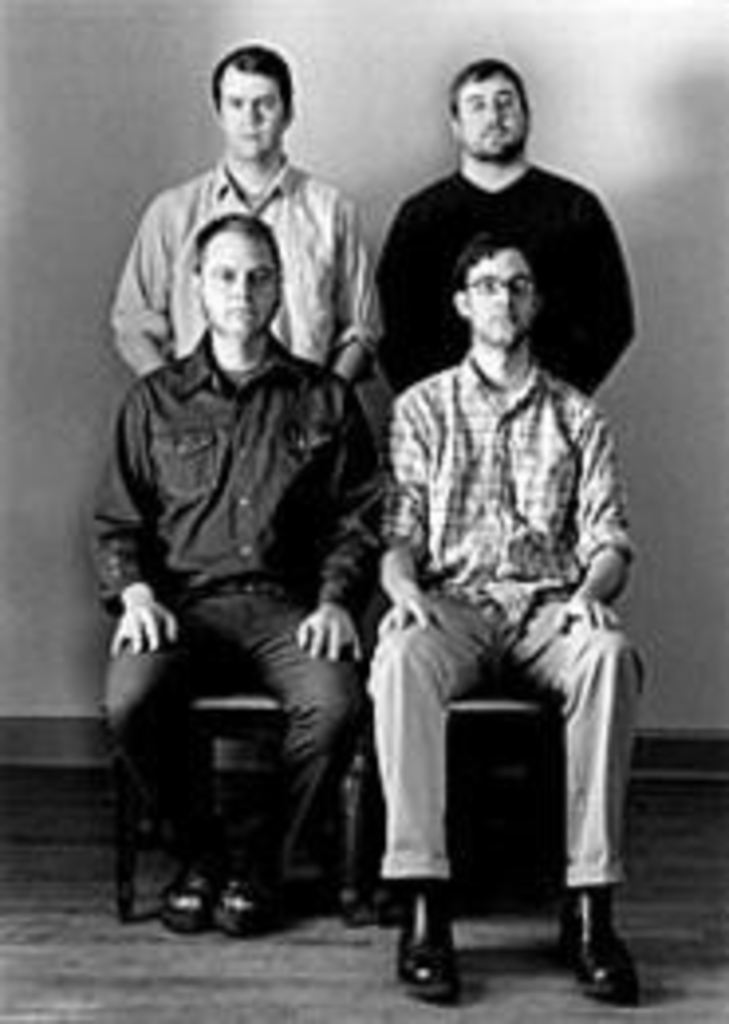 Dan Burton sounds like a dangerous man. But only to anyone with a well-founded fear of progressive rock, and only on paper. Like some art-prog rockers of the ’70s, the Early Day Miners frontman studied at a conservatory. He has released songs long enough to strain the typical sober attention span. And he loves “the idea of rock music being treated on a higher plane, sort of like jazz,” as he says from his Bloomington, Indiana, home studio.

Those are worrisome words during a time when bands ranging from indie punks Erase Errata to MTV pets Coheed and Cambria cheerfully use the word progressive to describe their music. Rest in peace, Joey Ramone, if you can. It seems that a quarter-century after being banished by punk rock, art rock has sneaked back through the gates. But Burton — like his role model Brian Eno decades before him — represents the rare kind that works: ambitious music that delivers pleasure rather than perplexity.

For starters, Burton’s recurring subject is not Middle Earth or the sex life of Christopher Marlowe set in cyberspace — just plain old American history. But unlike folk troubadours who explain the past through the music of the past, Early Day Miners simply evokes the sensual experience of a place and a time — and for once, that’s a good thing. Of “Townes,” a song about a reluctant Civil War conscript from the new Miners album, All Harm Ends Here, Burton says with a self-aware chuckle, “That’s part of our Civil War trilogy.” But he needn’t be sheepish.

“Townes” is a dusky landscape with wisps of harmonica, Matt Griffin’s spare and precise drumming, a luxurious bed of bass and synth, and Burton’s own lacy guitar work. The song conjures an overgrown, forgotten battlefield in which Burton plays a ghost whispering from the present: I was sick with worry that the actions chose/Forever would burden the soul and punish my brothers back home.

With a writer for a mother and an amateur historian father, Burton is no mere dilettante on the topic.

“My dad’s really into the Civil War,” he says. “All my life, I’ve been dragged to battlefields and things like that, so it’s kinda seeped into the music as well.”

Even the name Early Day Miners comes from a historical pamphlet Burton found one summer in Silvergate, Montana. But he also tackles recent closer-to-home history on All Harm Ends Here. “Union Trade,” about the loss of Bloomington’s manufacturing base, might be a slashing workers’ anthem in the hands of Billy Bragg. But with the Early Day Miners, it becomes a thoughtful walking tour with a gorgeous and delicately arching melody.

“There were whole neighborhoods built around GE and Westinghouse, and the factories are gone,” Burton explains. “The people who worked at them are retired or are just moving away, and the people that are buying their houses are like me. I work at a coffee shop, make rock records and live below the poverty line. It’s weird watching this town change — the song is kind of an observation of that.”

And that’s just how “Union Trade” comes off — a light-handed observation of a weird situation. Not a plaintive victim’s anthem, not a rabble-rouser for change, but something more honest — a picture of a strange scene in which something has gone missing and taken with it something harder to define.

This is music that evokes rather than explains, which makes the least tangible aspect of recording — atmosphere — all the more important. As a producer of indie bands ranging from Papa M (Dave Pajo of Slint) to indie singer-songwriter Damien Jurado, Burton has gained a knack for what was the producer’s art back when rudimentary recording equipment made the placement of microphones, a good ear and a resonant room crucial to the music’s success.

“You’re going to get that natural environment having some subconscious effect on your playing,” Burton says. “You might change something at the last minute so you’ll have more room in the recording. A lot of times, you have to work hard to create a feeling of space and depth.”

“The fact that he [Burton] is a very respected engineer-producer in the indie-rock community adds another level to the EDM sound,” says Jonathan Cohen, who met Burton while covering the Bloomington scene for Indiana University’s college paper and is now news editor for Billboard. “You would never guess a lot of their stuff is recorded in the basement of his house.”

All Harm Ends Here is actually the first Early Day Miners album not to be recorded with a maze of microphones snaking through Burton’s basement, kitchen and bathrooms. The album’s main tracks were laid down at the ancient, purportedly haunted Mt. Gilead Church outside Bloomington.

“The church was active until about a year ago, and the congregation moved to a brand-new, fancy building,” says Burton, espousing the structure’s ramshackle acoustics. “There’s not much isolation or anything like that. It kind of lends itself for things to bleed in a really odd way, because it’s just an incredible sounding room.”

If such musings sound self-indulgent, if you don’t give a shit whether an album is recorded in a decrepit Baptist edifice or in a Starbucks, then note that All Harm Ends Here still makes for evocative, tuneful listening in any context.

“The music is ideally suited to the listener’s own interpretations,” Cohen says. “I have always viewed the EDM album Jefferson at Rest as a pseudo-concept album about the Civil War. Is that really what it is about? Who knows. But it’s becoming more and more rare to encounter records that allow for such possibilities, musically or otherwise.”

The longest song on All Harm Ends Here is 6 minutes, a veritable ditty next to some of the tracks on previous Early Day Miners albums. Burton’s ambitions may be as lofty as quantum physics compared with the kind of rock approved as unpretentious — as down-to-earth as a worn-out sneaker will take it — but they’re downright humble by prog-rock standards.

“I think Eno made the argument that pretentious rock music isn’t really such a bad thing,” Burton says. “It’s kinda pushing the whole genre forward. You can say jazz is pretentious with Miles Davis and Bitches Brew. [But] I don’t think it’s being pretentious.”