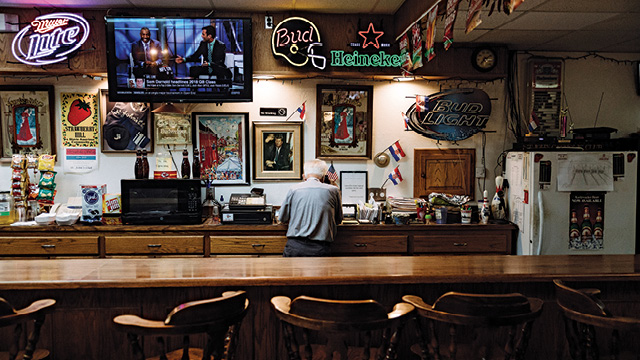 It was Thursday afternoon, and Kenny Yarnevich was running late for his shift at the St. John’s Catholic Club. The place was empty, though, save for the old man sitting at the bar, who looked as though he’d been clipped out of a 1938 issue of Life magazine. Everybody calls the man Jake, but his name is Charles — Charles Sutulovich. Why Jake?

“I got it in grade school,” Sutulovich said. “In the old days, almost everybody had the same name — Joseph or John or Mary or Ann. So you had to have a nickname, too. Back then, it was the Depression going on. There wasn’t hardly any food. But on your birthday, you’d get a treat to take to school. They asked me what kind of treat I wanted. I said cake. This guy says, ‘You always take the cake, Jake.’” 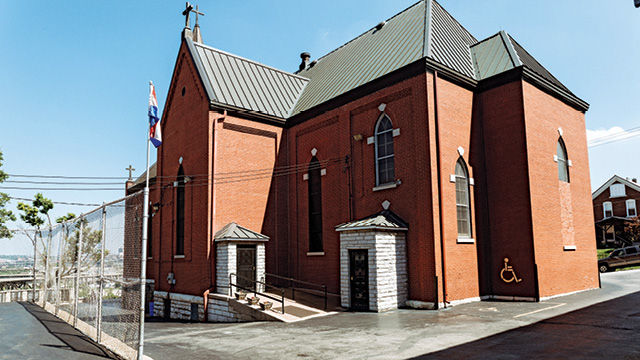 Sutulovich has been hanging around St. John’s — 708 North Fourth Street, top of Strawberry Hill, Kansas City, Kansas — his entire life. Ninety years. He attended the school, which closed in 2008, and the church, which still holds Sunday mass. St. John’s is the oldest Croatian church west of the Mississippi (built circa 1900), and its congregation of mostly second-generation Croats maintains close ties to the homeland. A few feet from Sutulovich, the latest copy of Zajedničar, a dual-language newspaper that calls itself “the official organ of the Croatian Fraternal Union of America,” rested on a counter. A flier on the wall announced the upcoming Croatian Day Picnic (Saturday, August 19). On the fridge was posted an advertisement for Karlovacko, a Croatian beer named after the city of Karlovac, home to the ancestors of many St. John’s parishioners. 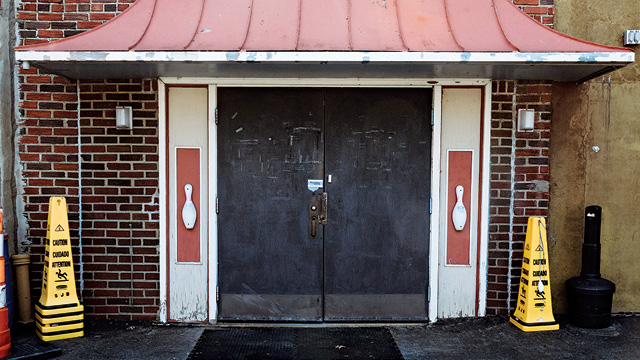 Increasingly, though, St. John’s enjoys a reputation that transcends its function to Croats and Catholics. That’s because it’s home to a well-preserved, six-lane, score-your-own-games bowling alley. Several of the Catholic churches in Wyandotte County used to have them, but over time they withered away, along with their old-world congregations. All Saints Church, over off Eighth and Vermont — it used to be St. Joseph’s, a Polish church — never removed its alley, but it’s water-damaged and has been closed for years.

That leaves only the lanes at St. John’s, built in the 1940s and still using the Brunswick A-2 pinsetter system: no plastic, no computer, entirely mechanical. For a price (about $350 for four hours), you can rent out the club — and unlimited rolls — for your party. 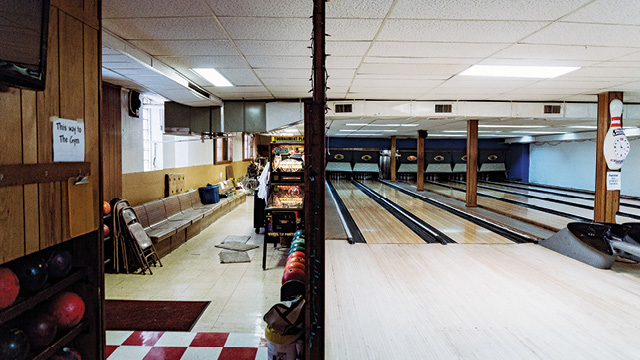 “The rental thing was initiated by Rick Mikesic, the president of the club before me,” Yarnevich told me later. “But it started really taking off three, four years ago. I used to work in sales for The Kansas City Kansan, the newspaper. Well, it shut down in 2009, as you know. So I took over management here at the club. I went to kindy-garten here, and my great-grandfather helped build the church. Anyway, I used my sales experience to promote the place. Got some business cards printed up and started distributing them down at the River Quay.” 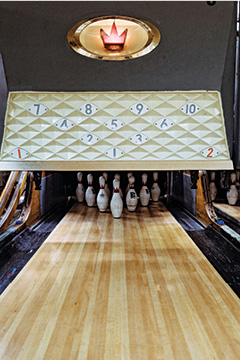 Nowadays, St. John’s Catholic Club is booking parties “at least 200 nights a year,” Yarnevich said — and that’s not including the bowling-league nights that meet three times a week between September and April. Earlier that day, Yarnevich had booked a fundraising party for Kansas House Rep. Tom Burroughs. David Alvey, who’s running for mayor in KCK, held his first campaign party at the club not long ago.

“We get all kinds,” Yarnevich said. “Corporate businesses. Restaurant staffs. Ordinary folks from around the neighborhood. Christmas parties. Our busy season is the holidays. But it’s a nice place to be on a hot day, too. We got the AC going. You don’t have to fight the bugs. Our beers are reasonable-priced — $2.75 domestic, $3 high-end. We provide free ice. You can bring in your own catering. We got a bartender on staff. You roll some games.”

Other than for parties, the club isn’t open to the public. That’s a luxury enjoyed only by Jake and a few other old-timers around St. John’s.

“Yeah, Jake,” Yarnevich said. “He’s kind of like our watchman around here. This is kind of his second home. Did he tell you about his routine?” 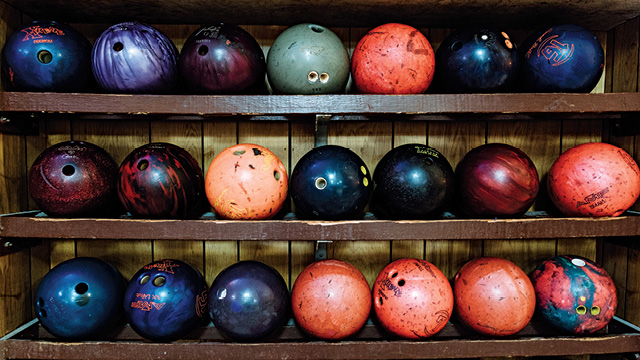 He did not. He’d wandered out without saying much. He’d seemed suspicious of the nonmember asking him questions.

“Well, he’s been coming in here pretty much every day since he retired from the Wyandotte County Courthouse, 20 years ago probably,” Yarnevich said. “No kids, never married. Never golfed, never hunted. This was always just kind of his place. He used to bowl, but he’s too old anymore. Then he used to keep score on the league nights, but his eyesight got too bad.”

Yarnevich went on: “Nowadays, he and a couple other old guys, they meet here around 5:30 in the morning and head over to Corner Café, in Riverside, to have breakfast. Then they come back here to the club and watch TV a couple hours. Then those guys take off and Jake sticks around and goes off to lunch somewhere, or he’ll do some work helping out the church. Later in the afternoon, this guy John, who lives across the street, he comes by, and he and Jake go to the Village Inn restaurant, over there in Mission. Then, just before rush hour, he gets in his car and drives home.” 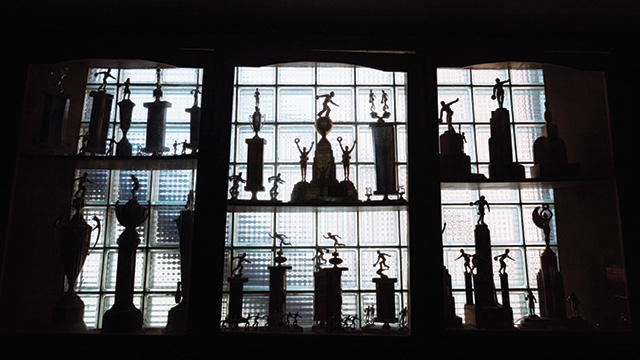 A 40-person party would be arriving soon. Yarnevich walked toward the lanes to lay out bowling sheets attached to clipboards.

“The old people around here, they died off or they moved out of the neighborhood when the highway got built, or their kids moved out south or west, where the better schools are,” Yarnevich said. “But they still come back for funerals and weddings and church events, things like that. And now we got people who like the older thing we do here. They like coming to these old kinds of places. They like keeping their own score.” 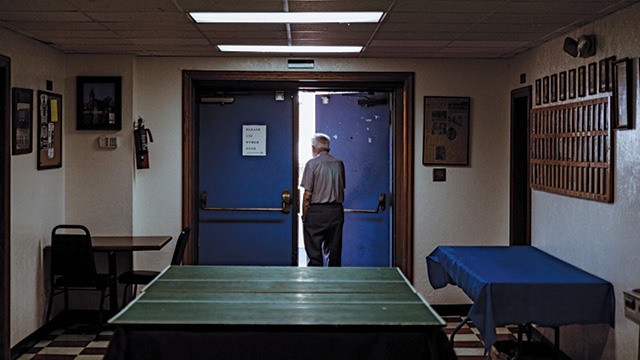