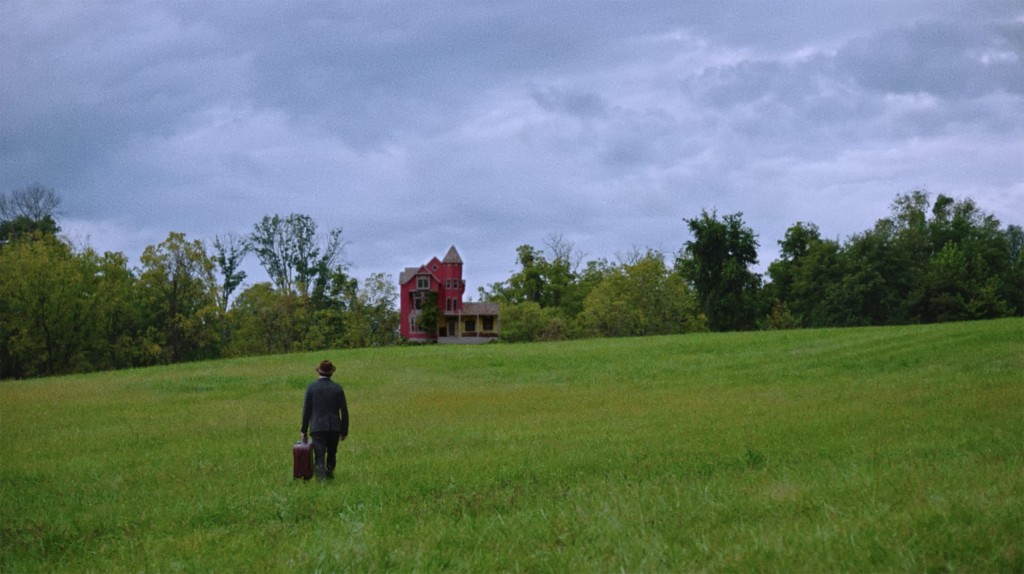 Anti-capitalist films are having something of a Renaissance in Hollywood right now, and Kentucker Audley and Albert Birney’s new sci-fi movie Strawberry Mansion is a charmingly oddball addition to the subgenre. Building on the affecting whimsy of their 2017 fantasy Sylvio, in which a debt-collecting gorilla finds success on local TV, Audley and Birney here craft a fable about the ills of consumer culture that’s as eccentric as it is surprisingly romantic.

In Strawberry Mansion’s near-future vision of 2035, consumerism has taken over people’s dreams, which are recorded and taxed by the state. Now, not even your subconscious is safe from a pop-up ad about the latest shopping deals. When the film opens, protagonist James Preble’s (Audley) nightly dream is confined to a single, strawberry-colored soundstage, where his “friend” Buddy (Linus Phillips) shows up only to plug a great-value bucket of chicken. He then finds himself ordering that very same meal the next day, with seemingly no thought as to how the idea popped into his head.

James starts off as the literal embodiment of the unconscious conscious consumer — he works as a full-time dream auditor. James’ latest assignment involves tracking down elderly artist Arabella “Bella” Isadora (a wonderfully wry Penny Fuller), who’s evaded taxes by taping and storing a lifetime of dreams in her rural home. She’s everything that the straight-laced James is not, from the strange light-up headset she wears, to her beloved pet turtle Sugar Baby.

When Bella insists that James stay in her farmhouse while he conducts his audit, her presence initially seems like a fly in his well-tailored ointment. But James finds himself wholly unprepared for her lyrical dreamscape, where the skeleton of a dead father emerges from his grave to play the violin and a crew of mouse pirates brave the high seas. It’s a stark departure from the monochromatic hollowness of James’ own subconscious, and electronic musician Dan Deacon’s score only makes these moments more phantasmagorical.

At the center of it all is young Bella herself (Grace Glowicki), who anchors everything with a sly smile and an enviable array of white prairie dresses. Her beguiling presence soon draws James in more and more, until the lines between his dystopian reality and her dream world begin to blur. When the ominous arrival of Bella’s advertising CEO son Peter (Reed Birney, imitating the most abrasive car salesman imaginable) forces the pair to retreat even deeper, James and Bella uncover a cosmic connection between them that could be the key to de-monetizing their lives once and for all.

There are, inevitably, times when Audley and Birney’s meta-commentary suddenly becomes too on-the-nose — one climactic sequence in which Buddy screams that James needs him to tell him what he wants as products fall from the sky is particularly egregious. But Strawberry Mansion ultimately makes up for those moments with its endearingly fantastical set pieces, which create a dream odyssey harkening back to childhood days where the secrets of the universe might as well be contained in a drop of melted ice cream or a wiggling caterpillar.

After many of us spent a hellish year in which we were barraged by spon-con but could count the number of times we hugged loved ones on our fingers, watching a couple of dorks find each other on a candy-colored dream beach feels like a weirdly cathartic way to kick off 2021.