Story of a Ghosty 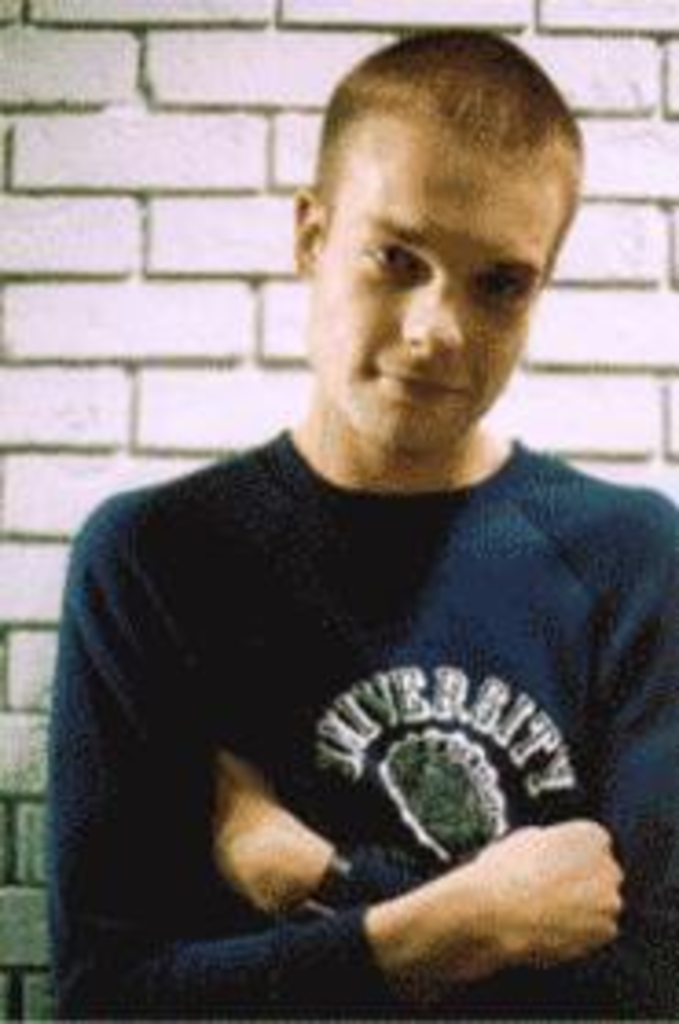 In the five years since its formation, Ghosty has evolved from a workaday alt-rock outfit to one of the more imaginative bands in the area. Fronted by singer-guitarist Andrew Connor, the group’s penchant for strong melodies and imaginative backing tracks has steadily grown, despite the numerous lineup changes that have reshaped the group’s sound. The following recounts the band’s history in the words of current and former members. (For best results, imagine that Alec Baldwin is reading the narrative transitions.)

In the fall of 1999, a teenager named Andrew Connor relocates from Sioux Falls, South Dakota, to Lawrence, Kansas, to attend the University of Kansas. He finds a kindred spirit in Richard Gintowt, another musician, while the two are living in legendary KU dorm Hashinger Hall. The earliest incarnation of Ghosty is formed soon after.

Connor: “We were a two-piece, just like the White Stripes. We had serious ambition from the beginning. We were playing off each other’s energy. We had a great time and great chemistry … jamming together was what really fueled the band back then.”

After working with a couple of bass players who prove ineffectual, Connor recruits bassist Jacob Baum. The group’s sound is sparse but effective, with Connor’s complex guitar lines and nasal vocal phrasing offset by the now-sturdy rhythm section. Ghosty amasses a small but devoted following on the house party circuit, which leads to a slot at Farmer’s Ball, KU’s annual battle of the bands.

Connor: “That was when we first started to get attention, which was super-exciting for us. In our minds, at that point, Lawrence was like Hollywood or something. I was shaking like a leaf when we took that stage. … I brought a six-pack of beer in my backpack. This was before I was 21. We advanced to the finals, and I left my backpack there and they found it. I went back to get it and some dude just reamed me and told me I was never allowed in the Bottleneck again. And I said, “But we’re supposed to play at the finals.” And he said, “Well you can fuckin’ forget about it, man.” So dramatic, so intense.”

Gintowt: “In hindsight, it’s pretty ridiculous that we actually were scared of being banned for life. I think that guy was gone like a month later.”

Ghosty cobbles together its first release, an EP titled Five Short Minutes, which was recorded in Baum’s bedroom studio. The effort is a modest local hit, and the trio spends several months honing its live skills. In August 2002, Ghosty packs up for Lincoln, Nebraska, where it records another EP, the aptly titled Three Pop Songs, with producer Mike Mogis of Bright Eyes and Cursive fame. The new material expands the band’s sound considerably, bringing layered harmony and new instrumentation to the fore.

Gintowt: “It was our first time spending a lot of money in a real studio, so we were very uptight about things. I think I pissed off Mike Mogis because I suggested we take a one-hour lunch break instead of two. There was also a strip club next door that we hit one evening. It was gross, and the ladies were not attractive. Other than that, I have fond memories of playing timpani, tubular bells and whatever else we could get our hands on.”

Looking to re-create its increasingly lush sound in a live setting, the band adds keyboardist David Wetzel in September 2002. Around the same time, Baum departs the fold and new bassist Mike Nolte is recruited. After months of gigging, the reconfigured outfit drives to Norman, Oklahoma, to record with producer Trent Bell, who has worked with the Flaming Lips and the Starlight Mints. Flaming Lips frontman Wayne Coyne is on hand and records a couple of songs with the band. Near the end of the sessions, Hardaways guitarist Jeff Ferrell is recruited to further bolster Ghosty’s sound.

Ghosty tours with Son, Ambulance and is tapped to play CMJ in New York City, at legendary punk venue CBGBs. The band later returns to the Big Apple for a gig at New York University with Broken Social Scene. Although Ghosty’s popularity is increasing, internal tensions between Connor and Gintowt reach a boiling point, leading to Gintowt’s abrupt departure.

Gintowt: “It was Andrew’s suggestion, but I don’t think I had a choice in the matter. Honestly, he never gave me a straight answer as to why. It definitely came as a surprise. Then again, it was probably on the radar for quite some time. I was frustrated because my first love is songwriting, and Ghosty was all Andrew. These frustrations led me to be very critical of Andrew as a performer and businessman, and I imagine he got sick of my constant nagging. A day after he “suggested” I leave — i.e., kicked me out — I realized that it was best for me, too.”

Ghosty considers various new drummers and eventually settles on experienced jazz drummer Josh Adams. The retooled lineup rehearses and records at Connor’s home studio, and issues a new EP titled Me, Me, Me in the spring of 2005. The quintet then travels to Austin to perform at the South by Southwest Music Festival, where it catches a break.

Connor: “We had played a couple of shows with this band from Athens, Georgia, called Jet By Day, and we ran into them on the street in Austin. They took our CD and gave it to their label, Future Farmer, and they liked it a lot. Someone suggested Future Farmer to me, so I e-mailed them and asked if I could send them a demo, and they said they had already been listening to us. Dennis from Future Farmer called me and said right away that he wanted to sign us.”

Future Farmer was slated to issue Ghosty’s full-length debut, Grow Up or Sleep In, on August 30. The album compiles tracks recorded for Three Pop Songs as well as newer material recorded with Trent Bell. This fall, Ghosty will return to New York City to play CMJ, and plans are under way for an exhaustive national tour.