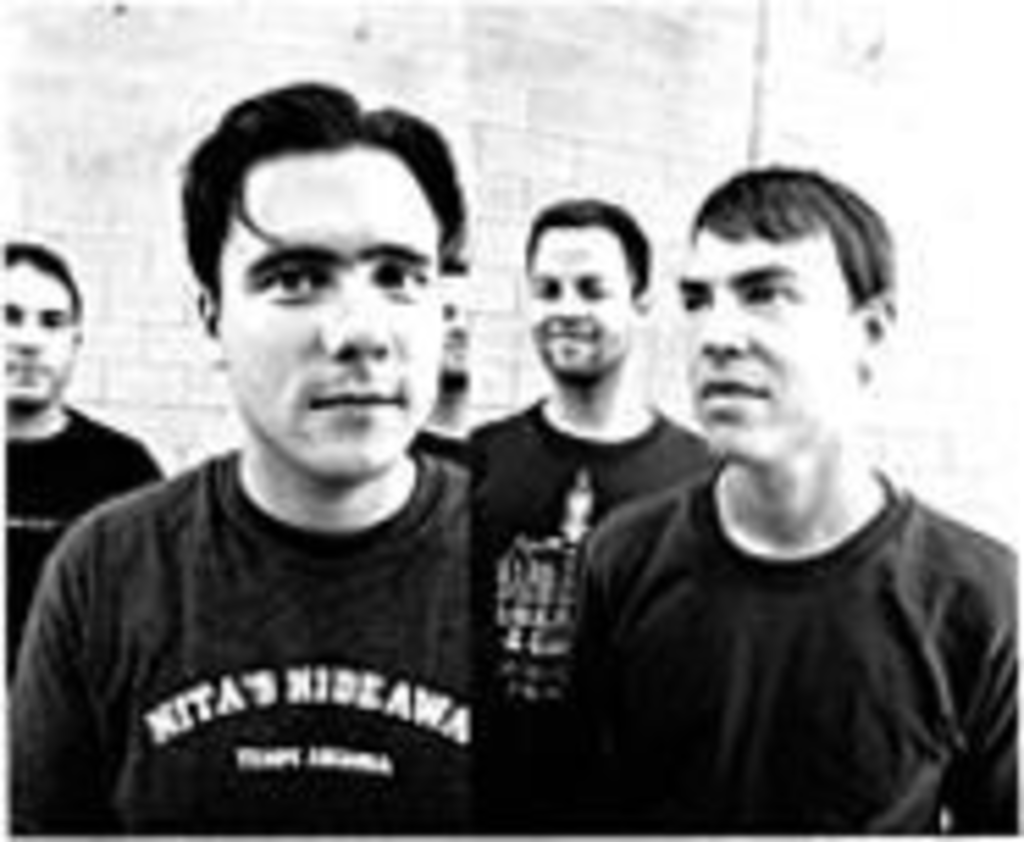 If you were to write a song about Jimmy Eat World, it might break down like this: Boy watches Twisted Sister video on MTV and decides he wants to rock. Later, boy meets other boys and forms a band named after a childhood drawing meant to make fun of a portly, overbearing sibling. Boy develops a local following in Mesa, Arizona, and gets signed to Capitol Records. Boy sings about alienation, affection and, well, other boy-meets-girl topics. Boy gets called “emo” a lot. Boy even gets to meet Drew Barrymore. Unfortunately, boy can’t sell enough albums to please Capitol, so boy loses record contract. But boy doesn’t lose the majority of his fans, nor does he lose his ability to write killer songs about girls. So soon enough, Jim Adkins, the boy in question, gets another chance to eat the world.

It’s a nice story, but longtime musicians might call the ending a little too Hollywood. After all, even big-name bands suffer after being dropped by their labels. See Public Enemy and Anthrax, or, for groups closer to Jimmy Eat World’s sound, check out the sprawling list of pop-punk bands (Samiam, Seaweed) signed, dumped and nearly destroyed in the wake of Green Day’s breakthrough. Jimmy Eat World, which includes lead singer and guitar player Adkins, drummer Zach Lind, bassist Rich Burch and guitarist Tom Linton, owes its unorthodox second-chance success to a combination of loyal fans (after being dropped, the band toured heavily, playing to healthy crowds and acquiring the funds to record a new album without label support) and a positive outlook.

“When we got out of the deal with Capitol, it was a liberating feeling,” Adkins says. “We weren’t relying on them for help anyway. We never viewed it as a bad thing.” Which, for Jimmy Eat World, it really wasn’t. Players released in the twilight of their careers must beg for another chance, but strapping young lads cut in their primes become highly courted free agents. Besieged with offers, Jimmy Eat World signed with DreamWorks, a label known for its long-term commitment to high-quality artists (Rufus Wainright, eels, Elliott Smith) for whom mass success remains elusive.

The group’s DreamWorks debut, Bleed American, differs significantly from its previous discs, Static Prevails and Clarity. Those records featured unusual (for a pop-punk band anyway) touches such as keyboard accents, ethereal string sections and songs that stretched past the ten-minute mark. Hell, “Lucky Denver Mint,” its only minor hit during its stay on Capitol, was buoyed by a drum loop that uncannily recalled Sinead O’Connor’s “Emperor’s New Clothes.” By comparison, Bleed American‘s concise tracks focus sharply on melodic hooks, catchy yet powerful riffs and crunchy drumming.

“It’s the way the songs lent themselves,” Adkins explains. “It didn’t seem like anything called for a string section or a foo-foo keyboard part.” In fact, though, several of the tunes seem to be calling out for a tiny violin solo. Adkins provides the American answer to Travis’ Fran Healy, making simple but disarmingly passionate statements designed to stir and reflect the emotions of its audience. Like Healy, Adkins walks the fine line between sincere and hokey (Just do your best, he urges at one point), but more often than not he nails complicated emotions with just a few words (Even if your heart would listen/I doubt I could explain).

Even more distinctively, Adkins acknowledges heartbreak but refuses to wallow in it. From giving pep talks (Hey, don’t write yourself off yet … Don’t you worry what their bitter hearts are going to say) to demonstrating tough love (Are you going to waste your life/Standing in the back/Looking around?) to finding the strength to stop obsessing over failed relationships (If you love me at all/Don’t call), Jimmy Eat World balances its depictions of joy and despair. But while emotionally confused fans might see the group as a big brother, Adkins swears Jimmy Eat World isn’t intentionally stepping into that role.

“When we’re working on a new song, we’re never thinking about a person listening to it,” Adkins says. “Maybe people hear or see something in the music that they can relate to.”

And there always will be people who see something in the music that’s not there. In the wake of the September 11 attacks, the album title Bleed American has gone the way of that Ahnuld flick about terrorists and Spiderman’s cinematic adventures on the World Trade Center. Future pressings of the album will be untitled, and radio DJs will not refer to the title song by name.

“It’s kind of silly,” Adkins says. “I understand why people might be skeptical to play a song called ‘Bleed American,’ but if people knew more about us, they’d know that’s not our thing. Calling our album Jimmy Eat World isn’t viewed as a compromise to us, because the music’s the same. We’re trying to be sensitive to people involved in the tragedy.”

It’s hard to imagine a scenario in which someone could accuse Jimmy Eat World of being anything but sensitive.