State of the World, at H&R Block Artspace, raises a hopeful flag 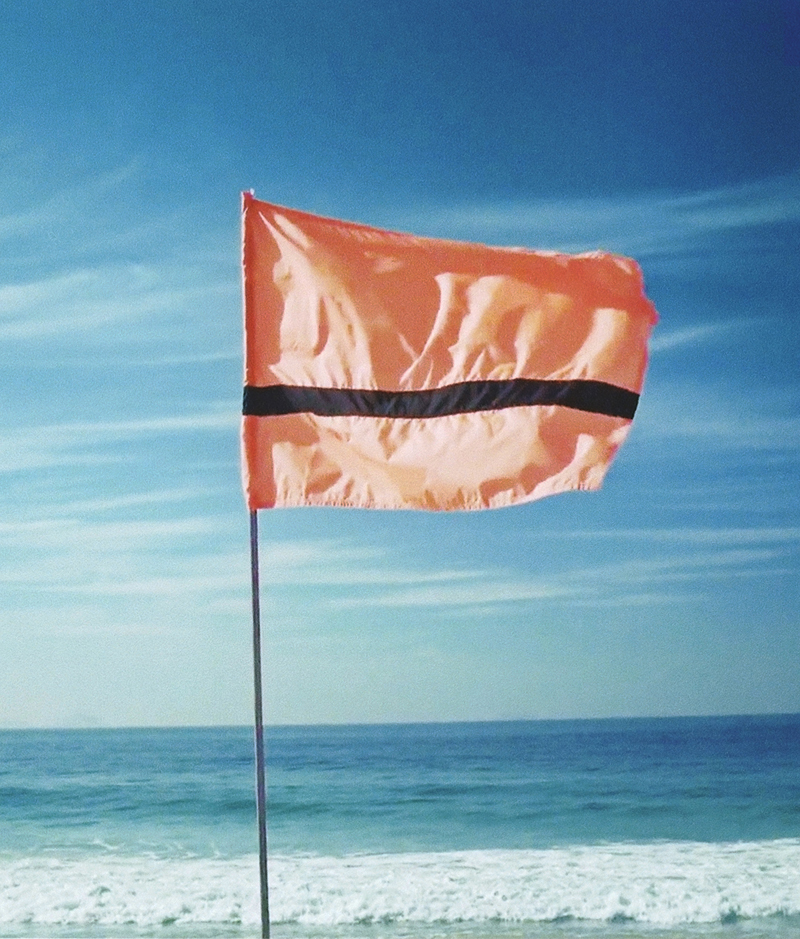 Yara Said, a Syrian artist, can be counted among the world’s 65 million refugees. She found asylum in Amsterdam, and was approached to design a flag for the 2016 summer Olympics. The first team of refugee athletes had come to compete in the Rio Games with no flag to march behind and no national anthem to play. Said took inspiration from her own experience and designed the flag as a visual echo of the life jackets worn by people hazarding a water escape; the colors, orange and black, signify a hope for safety against obvious danger.

The biggest piece in State of the World, the new exhibition at H&R Block Artspace, is a photo of Said’s flag, waving on a beach. It’s mounted on the west-facing Art Board, outside the gallery, its sun-warmed beach, against blue sky and blue water, evoking sanctuary. It’s a design many will recognize, and, in the context of this group show, it reminds you that to seek refuge is to test your ability simply to survive.

The refugee flag appears again inside the space, opposite an American flag — a conversation between this country and the refugee crisis going on around the world. The American flag has always stood for promise and opportunity, but that centuries-old foundation is under siege; there’s a loud and false patriotism that agitates for the exclusion of those who would be future Americans (and for the disenfranchisement of many who already are). State of the World, among its messages, reminds you that, if you were born here, raised here or just got here, the American flag is your flag, too.

It’s a hopeful notion, but hope isn’t the predominant rhetoric in the air these days. You know things are bad when artists are preoccupied with survival. Beyond mere politics, which these days offers no end of possible subjects, State of the World focuses on national identity. With its varied renderings of flags, it asks us to define — to redefine — the cultural, geographic and personal meanings involved in these complex symbols. What happens to us when our flag is altered? When it is stripped from us? When we leave it behind?

Sonya Clark makes her version of these inquiries using three piles of red, white and blue thread at chest height on a small white shelf. Fibers are stacked like nests in her “Unraveled,” and familiar white stars line the bottom of the white filament. A product of her performance “Unraveling,” its colors could, at first glance, belong to any red, white or blue material. But this is the Confederate flag, deconstructed.

Lots of baggage in that idiom of the American South and the Civil War. To many, it represents racist values, though the flag can still be found, with disturbing freqency, all over the country. Clark’s attentive dismantlement of such a heavily freighted object counts as a fearless act on the order of burning the U.S. flag. Yet her sculptural remnants are humble and nonthreatening. They lack the immediacy of the original message, and the conflict posed to the viewer becomes: What do strong symbols mean when we break them down to their simplest components? 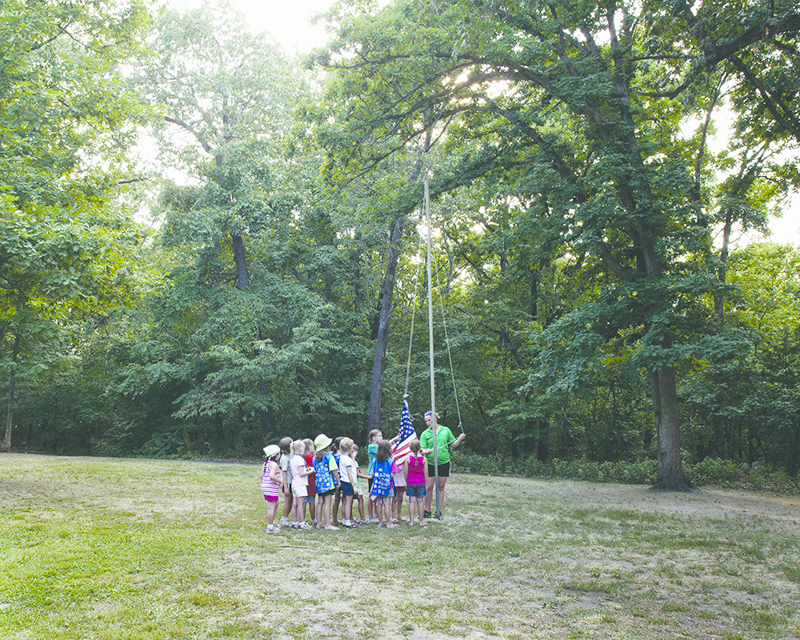 Our collective relationship with the American flag is quietly addressed in Mike Sinclair’s photo “Lowering of the Flag, Prairie Schooner Girl Scout Camp, Kansas City, MO.” Uniformed girls gather around a flagpole in the green outdoors. An instructor appears to be offering a lesson as the children in the front prepare the flag for storage. The image recalls a familiar early encounter with flag ritual: patriotism as a group bonding activity undertaken at a young age.

In Sinclair’s “Lunch Counter, Missouri State Fair, Sedalia, MO,” the colors red, white and blue crowd the image — a commissary plastered with the Pepsi logo. A couple of cheap American flags hang on the edges of the image, but the message of the colors here is one of unchecked consumerism. The contrast between the group of children engaged in a traditional outdoor activity and the irreverent use of American colors to cheer capitalism is striking. But it’s also familiar — to be indoctrinated into reverence for the flag is to be prepared to salute the freedom to buy and drink soda.

In Edith Dekyndt’s 18-minute video “One Second of Silence, (Part 01, New York),” a translucent flag waves against a subdued sky. The only indication that it is separate from the background is in the dark wrinkles visible as the fabric catches in the wind. We recognize when a flag has been up the pole for so long that it has begun to tear and lose color.

Any Girl Scout could tell you that’s a no-no. Yet a case can be made for a tired flag as a symbol that transcends patriotism. The flag in the video ages until all signifiers of its originating nation have disappeared, revealing the landscape up ahead. Such a delicate, translucent material would be a most radical design for a world flag; to build a national identity or a governmental structure around inclusivity — around transparency — is a worthy dream. 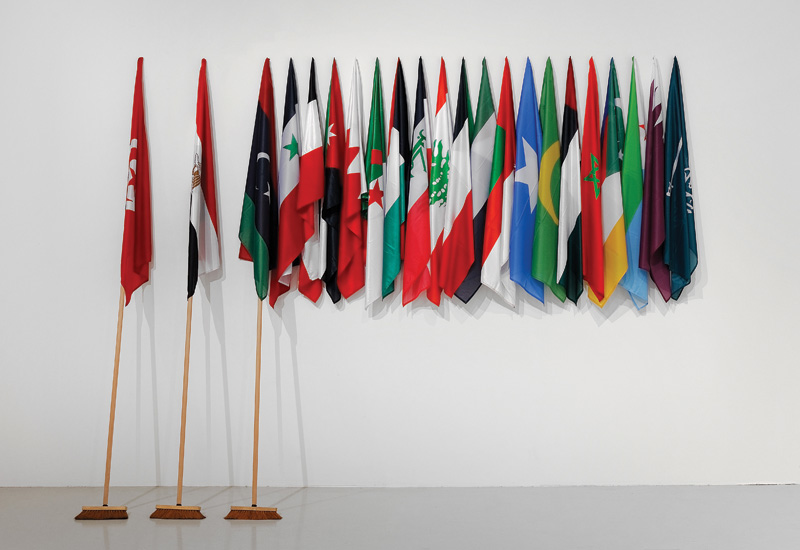 We won’t see such a thing in our lifetimes, but the artists here dare us to wish for it. There is, for instance, Mounir Fatmi’s “The Lost Springs,” constructed in 2011, the year of the Arab Spring. (The work was censored at Art Dubai the same year.) Here, the Libyan, Egyptian and Tunisian flags are propped up on the handles of push brooms while the rest of the 19 flags representing the Arab nations hang heavy from the wall. The Arab Spring represented a new beginning for the leading nations of the movement, and Moroccan-born Fatmi originally displayed the piece with two push brooms, adding a third when Libya overthrew dictator Muammar el-Qaddafi. “The Lost Springs” is devastating in the implication of stagnant revolutions and how quickly a fight for democracy can wane or be quashed.

Six years ago, those uprisings thrilled some Americans, yet we could also look upon them from a comfortable vantage. Now, with a new U.S. administration seemingly custom-built to ignite political passions, we look back on the Arab Spring with new eyes. State of the World is one lens through which to re-examine the recent past and confront the future. And Fatmi’s art here delivers a powerful message: If you want to unfurl a flag, get ready to grab the broom and get to work.

State of the World