St. Louis’ post-everything rockers So Many Dynamos fight complacency and boring music with The Loud Wars 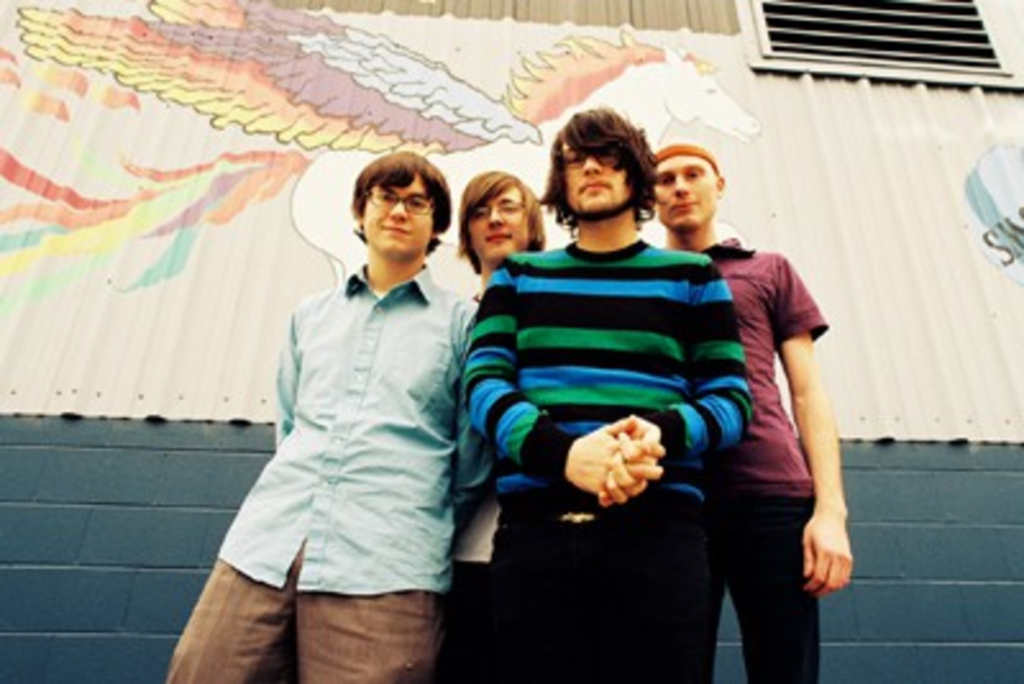 Murphy’s Law works something like this: On the hottest day of the year, the air conditioning will break. This was proved true on a recent Saturday in St. Louis, when the A/C conked out at the So Many Dynamos‘ CD-release show — on a day that hit 98 degrees before factoring in the heat index.

Saunalike atmosphere be damned, the 250 people crammed into a venue called the Firebird were ready to celebrate the Dynamos’ new album, The Loud Wars. And the sweat-drenched quartet fed off that enthusiasm. Spindly drummer Clayton “Norm” Kunstel, his face contorting with grimaces, bashed out intricate, math-rock rhythms. Guitarist, backup singer and keyboardist Ryan Wasoba threw his body around the stage as if his limbs were the consistency of Jell-O. Guitarist Griffin Kay, also adding backup vocals, hovered with more measured movements, deep in concentration, while keyboardist and lead singer Aaron Stovall anchored the stage’s middle, manipulating multiple synths with ease.

The band’s grooves locked in with ferocious precision, coalescing like a killer game of Tetris. With a simple drumbeat, Wars‘ lead track — the bustling, electro-prog “Artifacts of Sound” — segued into “Progress,” an elastic dance-punk jam. Stereo-surround percussion marked the six-minute ambient swerve “The Formula,” while haywire synth buzzes and eerie blurts marked the hit-on-Mars feel of “New Bones.” Even older songs, such as the burbling “When We Were Machines” and the spiky “We Vibrate, We Do,” felt revitalized.

The band is frequently — and derisively, at least in a recent Pitchfork Media review — compared with Washington, D.C., postpunk acts such as the Dismemberment Plan and Q and Not U, but the Dynamos’ music is much more nuanced. Thanks to influences ranging from At the Drive-In to Yes (and including Broken Social Scene, Minus the Bear, Talking Heads and Weezer), Wars is faster, busier and more futuristic — and far more fluid.

“We’re always challenging ourselves,” Stovall says. It’s the day before the Firebird steam bath, and he’s wandering around a mall chatting as his girlfriend does some shopping. “Me personally, I’ll be practicing, myself, at home or something, and a part in an old song will come up, and I’ll be like, ‘Well, I’m not using this hand right now.’ And then I’ll come up with something else to go along with it.

The perpetual evolution makes sense, especially because Wars‘ songs aren’t new to the band. The Dynamos recorded most of the album with Death Cab for Cutie guitarist Chris Walla two years ago at San Francisco’s Tiny Telephone studio (which is owned by John Vanderslice) and at Walla’s Portland, Oregon, home studio. Between then and Wars‘ June 9 release, the band enlisted mixer Alex Newport (At the Drive-In, Two Gallants) to buff up its tracks. It toured with indie-poppers Ra Ra Riot, indie-weirdos Pattern Is Movement and Nintendo-core screamers Horse the Band, and snagged a record deal with Vagrant Records.

Although Vagrant built its reputation on punk- and emo-leaning bands (including the Get Up Kids, which Stovall cites as an influence), the label has recast itself as an eclectic clearinghouse; the Dynamos’ labelmates now include the Eels, Placebo, the Lemonheads and the Hold Steady. Vagrant’s resources have been the greatest boon for the band.

“It’s just allowing us to be a band,” Stovall says of being on Vagrant. “That’s what we’ve been trying to do for the past seven years. Ryan [Wasoba] booked the tours before. We did all of our own promotions, publicity and all that stuff. We don’t have to worry about doing any of that stuff anymore. All we have to worry about now is just writing the songs. That’s pretty comforting.”

Until signing with Vagrant, So Many Dynamos was a DIY operation out of necessity. Formed in September 2002, the band started touring the following summer; it released an EP, two LPs (including the critically acclaimed Flashlights) and a 7-inch by the end of 2006. For every stroke of fortune — opening spots for the Postal Service, Maritime and Cursive — there were setbacks. The band was robbed in Seattle and totaled its van in a frightening 2007 accident near Omaha.

Things are looking up for the Dynamos, though, as the group embarks on its first headlining tour. Last October, the band opened two dates for Death Cab for Cutie, and it’s opening Harvey Danger’s Chicago farewell show in August. Still, knowing that people can go to Best Buy or Borders to buy The Loud Wars remains a “weird” thing for Stovall to process. And having newer, younger fans — such as the brothers who came to a recent record-store performance and said they listened to Wars every morning before heading off to the skatepark — is still a novelty.

“[In the] scheme of things, we’re still really, really small,” Stovall says. “It’s getting there. It’s nice that we’ve just been able to do things at our own pace and not have any overnight, blowup success, where we would have to feel a whole lot of pressure to try and outdo ourselves on the next record.

“We’re all pretty comfortable with the pace,” he continues. “Even though it was really super painful that it took two years for this record to come out, I think that we’ve grown tremendously since we finished recording this one. We’re super stoked to do the next one.”