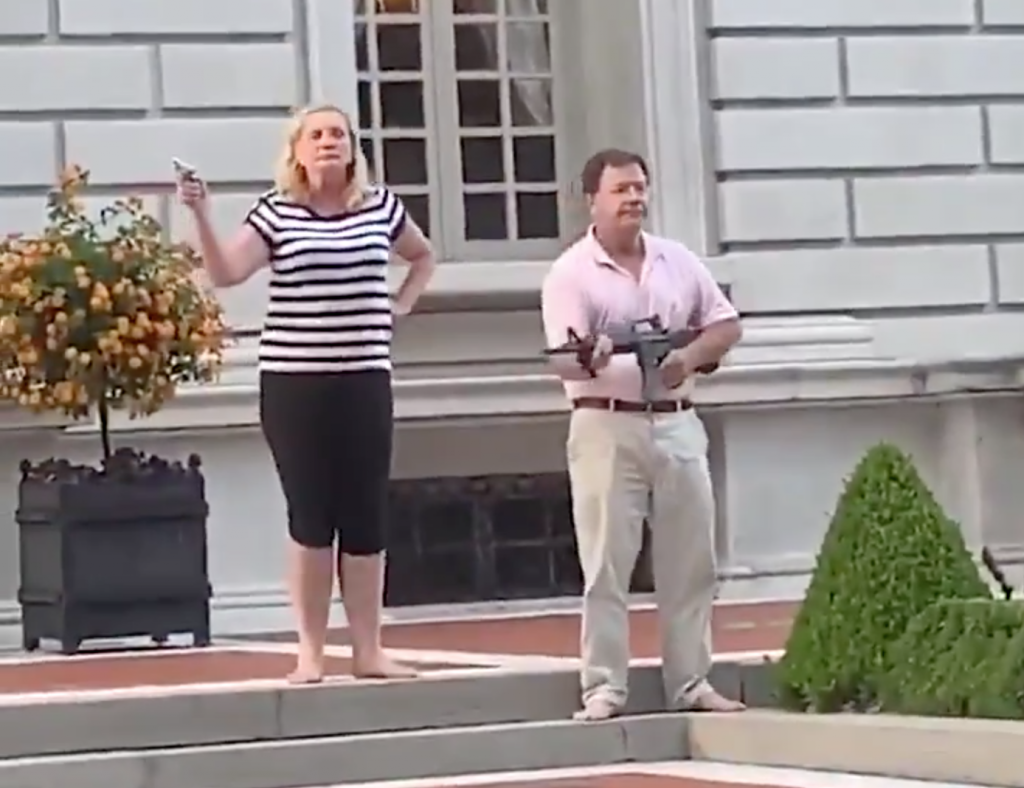 Over the weekend, a St. Louis couple gained national notoriety for standing in their front yard and aiming weapons at peaceful Black Lives Matter protestors. The protesters were marching towards the mayor’s home to demand her resignation, following the doxxing of protestors and a number of other recent terrible decisions.

As you can see from the video below, the protestors were completely uninterested in the couple’s home, yet they were verbally attacked and threatened with weapons by the two most frightened rich people I’ve ever seen.

A couple pointed guns at protesters in St. Louis as a group marched toward the mayor's home to demand her resignation. https://t.co/5EqDd43QCd pic.twitter.com/KWNaif77ch

The couple in question is Mark & Patty McCloskey, a pair of lawyers from the St. Louis area.

Social media spent the day dunking relentlessly on the couple, often referred to as “Ken and Karen”, which plays upon recent internet jokes assigning blank names to white people who publicly abuse their privilege and inflict it on others in bizarre, often racist, ways.

Everybody freeze, this is a multi-level marketing scheme pic.twitter.com/iiu3mKaakl

Not a great look, folks.

The house itself is a disaster of opulence, of which St. Louis Magazine has previously profiled.

Just saw the gun couple photos. I guess my main question is: who moved the palace of Versailles to Missouri?

Armed couple wields AR-15 rifle or other weapon of war at #BLM demonstrators in Central West End section of St. Louis. Woman points handgun as they walk by the house en route to the Mayor.

This is an unprovoked display of lethal force. #StLouis #mccloskey pic.twitter.com/2YZHwHuXfa

White people in St. Louis who are so threatened by people marching in support of #BlackLivesMatter that they come out of their house and point guns at protesters are a perfect metaphor for why these protests are necessary. Also they should be arrested.pic.twitter.com/7OQhhCJ6KH

Some online speaking in the couple’s defense cite that their home is in a gated community and protestors entered without permission. Unfortunately, that doesn’t apply in this situation.

It is a federally designated historic district that states it is accessible to the public on the proposal for protection. Walking through unlocked gates into a historic district is not trespassing. They should have looked at the designation before they bought a house there. 🤷‍♀️

it is extremely bad that old white people have been radicalized to this extent, but also this woman definitely learned how to hold a gun from goldeneye 64, specifically pic.twitter.com/ZSNZR2cetT

The attorney for the gun-brandishing St. Louis couple says this today (and yes, it's an exact quote):

“My clients, as melanin-deficient human beings, are completely respectful of the message Black Lives Matter needs to get out, especially to whites."https://t.co/PpWb92U5HA

Imagine what Kansas City law enforcement could evolve towards