Spooky Season: The religious tension of 1955’s The Night of the Hunter 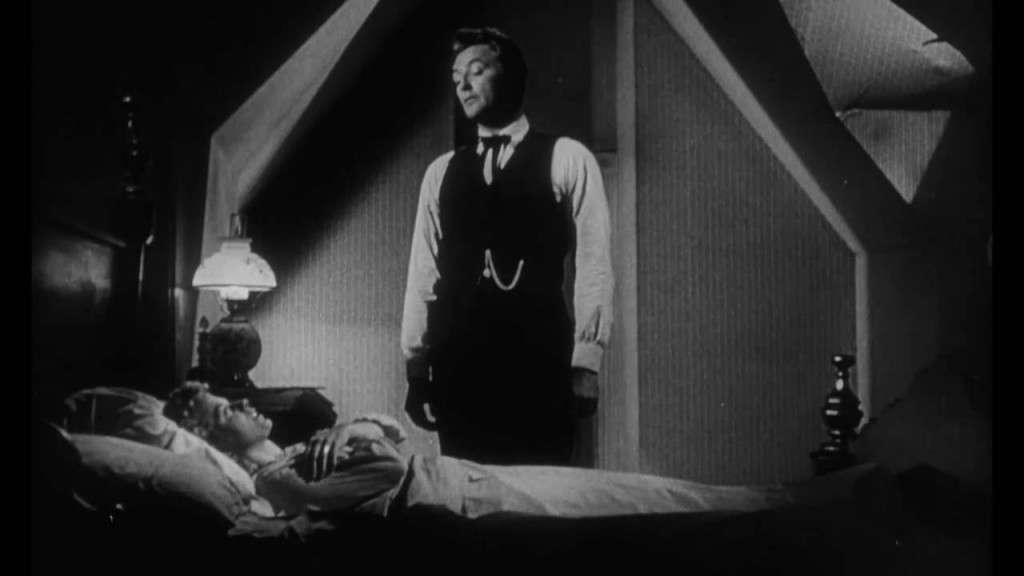 “Spooky Season” is our series of Halloween horror classics. Our team is sharing some of their favorites with you as fall settles in and we all need a good distraction from a world on fire. Today, Dan’s chatting about a 1955 stone-cold classic.

It would be difficult to classify The Night of the Hunter as a horror movie.

Despite having seen it several times, I still don’t know what label suits this movie. United Artists, the movie’s distributor, didn’t know how to classify the film, either, which explains why it frustrated critics and flopped at the box office when it opened in 1955.

With the only movie he ever directed, moonlighting actor and stage director Charles Laughton (who gave unforgettable performances in Witness for the Prosecution, The Private Life of Henry VIII, and countless other films) makes his own rules. As a result, it’s scary in a way that no horror film can be.

Characters talk directly to the camera. The outdoor sets look like sets. Laughton and screenwriter James Agee, working from Davis Grubb’s novel, even reveal who the film’s depraved killer is just as the movie is starting.

Cinematographer Stanley Cortez (The Magnificent Ambersons) inverts the way movies normally work visually.  In the movie’s most dramatic scenes, the characters closest to the camera are in silhouette, while characters in the background are brightly-lit.

As you watch The Night of the Hunter, you begin to think that color is a step backward from Cortez’s high contrast black-and-white. His depictions of crime scenes look strangely poetic. Because it’s hard to tell what is a dream and what is a waking moment, the fear is even more intense. Grubb was an art student before he was a novelist, and he gave sketches to Laughton and the crew that were incorporated into the visuals.

That said, the main reason that The Night of the Hunter is ideal Halloween fare is Robert Mitchum’s turn as Preacher Harry Powell. It’s easy to see why rural West Virginians in the Depression court his favor. He sings hymns beautifully and speaks with a calm authority, even when he’s clearly lying.

He has tattoos of “love” and “hate” on his fingers and tells a gripping story about their eternal battle. While Harry looks imposing in his hat and bolo tie, Laughton and Agee instantly reveal he’s a serial killer. Apparently, he’s got sexual issues that would make Sigmund Freud roll his eyes. He feels more comfortable with a switchblade than with a lady.

Mitchum’s placid features hint that there’s a boiling rage underneath them. Most of his victims are rich widows, and his newest bride (Shelley Winters) is unaware of his killing spree or that that in her house is $10,000 he wants. If he must kill her or her young children John (Billy Chapin) and Pearl (Sally Jane Bruce), he will.

Mitchum rarely yells or shows outward anger, but his unrelenting pursuit is frightening. “Don’t he never sleep?” asks John. His craven but ceaseless resolve makes Freddy Krueger seem merciful in comparison. Most of the grownups believe his ruse, John and Pearl are on their own in trying to survive his homicidal greed.

Harry’s an obvious hypocrite, so it’s tempting to think of The Night of the Hunter as an assault organized religion and Christianity in particular. The city of Memphis thought so, and the film was banned there.

What makes the film more dramatically satisfying than a simple potshot at sanctimony, is silent film star Lillian Gish’s turn as Miz Rachel Cooper. In running an informal orphanage, Miz Cooper is literally doing the Lord’s work. She is as compassionate as she is strict, and she recites scripture with remarkable detail and conviction. As a result, she’s one of the few adults that John and Pearl encounter who knows Harry is a dangerous fraud.

In later interviews, Mitchum raved about working with Laughton, but when asked why he never worked with the director again, he said curtly, “He died.”

Because we have no other Charles Laughton movies to reference, there are chills, wit and even hope that emerge here in a way they won’t in any other film.