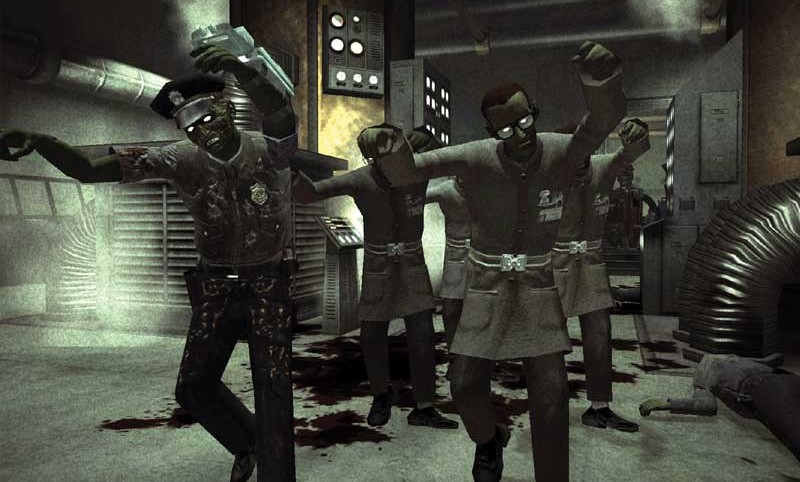 What do The Penguins, The Jetsons, and consuming human flesh have in common? Only one thing and you’re gonna love it.

Back in 2005, a lesser-known Xbox game came out called Stubbs The Zombie: Rebel Without a Pulse. Set in a retro-futurist alternative universe 1959, you played as a zombie. Your name was Stubbs. This information was mostly covered in the title. Having been killed over your love of a woman, you’ve returned from the dead to take your sweetie back—and maybe get some revenge in the meantime.

The game itself was one of those quirky releases too beautiful and bizarre for this world. Maybe folks didn’t catch on with playing as a quickly decomposing hero who throws his own organs like grenades. (Although it was built in the original Halo engine, so if you knew how to play that game, this came as second nature.)

While the game is a delightful experience, it’s fairly hard to track down these days. What is more readily accessible is the absolutely buck wild soundtrack that the game studio had commissioned. Rather than churn out nondescript original scoring, the team hired some fairly big mid-aughts bands to cover hits from the 50s and 60s, to match the game’s weird timeline setting.

My car is almost never without a CD copy of this. You can find them online for a couple of bucks, tops. But every track is available to stream right here. Enjoy this mix of some of my all-time favorite deep cut covers—hidden forever on the soundtrack of a game you’d have never played.

Feel like we’re kicking this off by establishing out-of-the-gate how mid-2000s this line-up is gonna be by kicking off with Ben Kweller. He saunters through a bubblegum-pop track as if he’s being dragged by being road-rashed by depression. Top-notch bummer kick-off.

The Raveonettes – My Boyfriend’s Back

The Danish indie duo’s inclinations were met by the most obvious re-appropriated undead anthem for a zombie protagonist vehicle. This is hot rock. Huge She Wants Revenge energy.

Another Bummer Ben singer, another classic absolutely slayed in signature style. This is one of those covers were you’re convinced the band shagged it off in one take, because they were born from the ashes of this track. It was in their bones. It was a joke to even think they needed to discuss what was going to happen here.

Rose Hill Drive – Shakin’ All Over

One of the few bands on this soundtrack that was here just for this cultural moment, and then disappeared entirely. Which works for this track, because I never knew the original. So this is one of those where it all cancels out. I get to appreciate the only song I’ll ever hear from this band, doing their best version of The Black Crowes, via my love of a song they didn’t write. Fine by me.

Cake – Strangers In The Night

Cake is unbeatable. Untoppable in their space, for their sound, for what they do. Their covers have since been collected in a full album, because there’s nothing they can’t tackle without it becoming instantly their own signature sound. This is maybe my all-time favorite version of the song. The tone and the lyrics blend into a place that just feels so tequila Zen, you can’t fight it.

The Walkmen – There Goes My Baby

The Walkmen were such a beautiful example of gin-drenched rock sadness (paving the way for the Cold War Kids) and this is a reminder of the beautiful melancholy they could accomplish with the bare minimum of soundcraft. Just an all-timer here.

Just listen to that beautiful re-imagining of that riff???? It’s stuck in my head at least once per week. I think it was my ringtone for a while in college? Just an absolute acoustic banger.

The Dandy Warhols – All I Have To Do Is Dream

The band behind the Veronica Mars theme song has just a silly amount of studio fun with this. Sometimes it is just nice to hear a band completely fuck off with their homework. Everything is too serious these days. It’s a good version of the song and it feels like it must have been nice to sip tequila in the room and bang on random noisemakers.

This is maybe my favorite song of all time. You’ll never hear another song by this band, ever. Just enjoy the most incredible swell, verse by verse, leading to a wall of sound obliterated by God’s favorite theremin solo. If there’s only one song you listen to on this album, please hop in here.

The Flaming Lips – If I Only Had A Brain

Clem Snide – Tears On My Pillow

Again, what are we doing here? How we were lucked into these sincere re-imaginings? One of the most depressed remembrances in all of pop winds up with a shredding guitar solo? Why not.

The only non-cover on the album is kudos of the band who did the theme song for The O.C. To their credit, they made a messy rock song that felt similarly disjointed from time and space instead of rooted in 2005. It’s like Radiohead’s “Electioneering” accidentally oozed out of someone’s broken amp in the 1970s. I’ll take it.