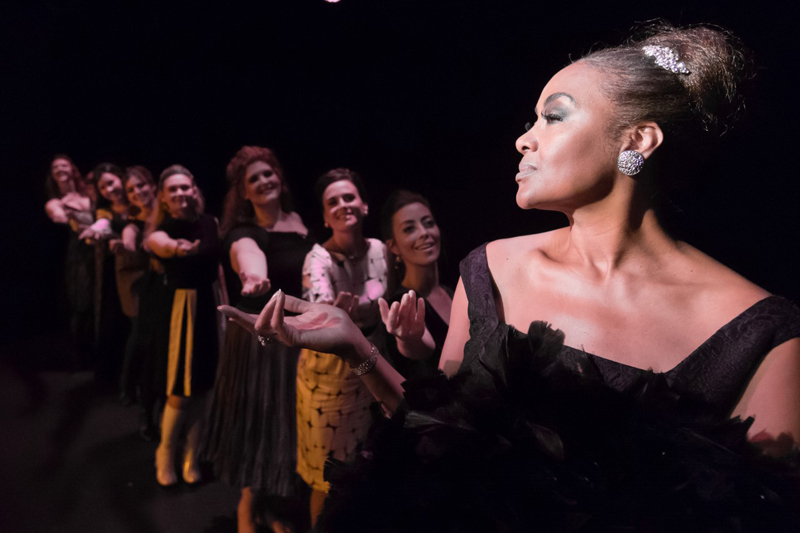 On paper, Arthur Kopit and Maury Yeston’s musical Nine is just one more in a long line of uncomfortably aspirational works about successful men who become serial adulterers (with regrets!).

Onstage, in the care of Spinning Tree Theatre, it’s an exercise in radical empathy.

Nine loosely traces the contours of Federico Fellini’s film 8½ as it follows Italian filmmaker and stunted womanizer Guido Contini on his search for artistic and emotional truth. Guido hasn’t had a prolific year. Strapped for ideas and on deadline with his relentless producer, Liliane La Fleur, he travels to a spa with his wife, Luisa, to clear his head and bang out a script.

And to meet his mistress, Carla Albanese. And his muse, Claudia Nardi. And his harshest critic (and former lover), Stephanie Necrophorous, who maintains that Guido’s work is emotionally inane. 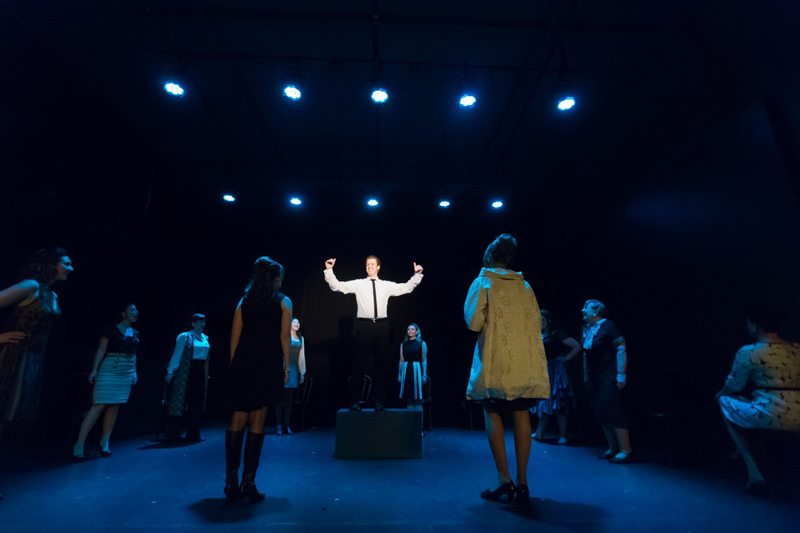 No argument here — in “Guido’s Song,” the filmmaker admits: My body’s clearing 40 as my mind is nearing 10. But Spinning Tree’s production, staged at the Living Room Theatre, carves away the superficial glamor and brass to throw the show’s emotional core — and its human toll — into sharper relief.

It starts with a pared-down score, which music director Gary Green has adapted for one piano and four hands (belonging to Green and Pamela Baskin-Watson). The piano’s music-box upper register lends even comic songs a sentimental edge, and on the Living Room’s cozy stage, the show takes on the intimacy of a cabaret piece.

In keeping with that treatment, director Michael Grayman has eschewed set pieces and flats for black stage curtains and a semi-circle of spindly chairs. Actors handle most scene changes themselves, with an assist from lighting designer Nicole Jaja, whose color changes help anchor the play’s shifting settings and hazy timelines. Jaja’s work is especially sharp in “Only With You,” in which spotlights linger on Guido’s old lovers, fading gradually as he spins to the radiant next. The effect is more gut punch than punch line.

Costume designer Shannon Smith-Regnier channels classic film in a black-and-white palette that nonetheless gives each woman her own style and edge. And the supporting players in Guido’s life are, perhaps predictably, more colorful than the leading man.

As Luisa, Lauren Braton is reason alone to buy a ticket. Her rendition of “My Husband Makes Movies” is restrained and achingly clear; Braton seems to luxuriate in high notes and meandering passages where other singers strain. As Liliane LaFleur, Angela Hagenbach lends her peerless, feather-light contralto to “Folies Bergeres.” Although Hagenbach’s French accent occasionally falters in dialogue, her singing is always confident and hypnotic.

Leah Swank-Miller is energetic and uninhibited as Guido’s hopeful mistress, Carla, and Devon Barnes effectively channels Maude Lebowski as Stephanie, an avant-garde critic with a severe red bob and an erudite sneer. Strong work from Taylor Harvey (as Claudia), Judy Simmons (as Guido’s feisty mother), and Ryan Tucker (as Guido’s first prostitute, Sarraghina) round out the main cast.

Vigthor Zophoniasson, who plays Guido, sounded at times muddy on opening night. Soft consonants and falling inflection flattened fast-paced songs such as “The Script.” But Zophiansson is a skilled actor, and his smart, charismatic portrayal subverts expectation. In Zophiansson’s care, Guido comes off less as tempestuous lothario than as criminally insecure artist.

That sensitivity proves key to the show’s success. Nine doesn’t exactly tread sophisticated emotional ground: Kopit and Yeston attempt to pin Guido’s lifelong infidelity and arrested development to a Catholic upbringing and a childhood visit to a prostitute. Luisa doesn’t buy it as an excuse. We don’t, either.

The musical succeeds instead in its embrace of simplicity — in both melody and morals. Forget, if you can, Rob Marshall’s 2009 film version. Spinning Tree’s modest orchestration and pared-back design give us something richer: a close-up of Guido’s life in which we see all of the grit and none of the glamor.