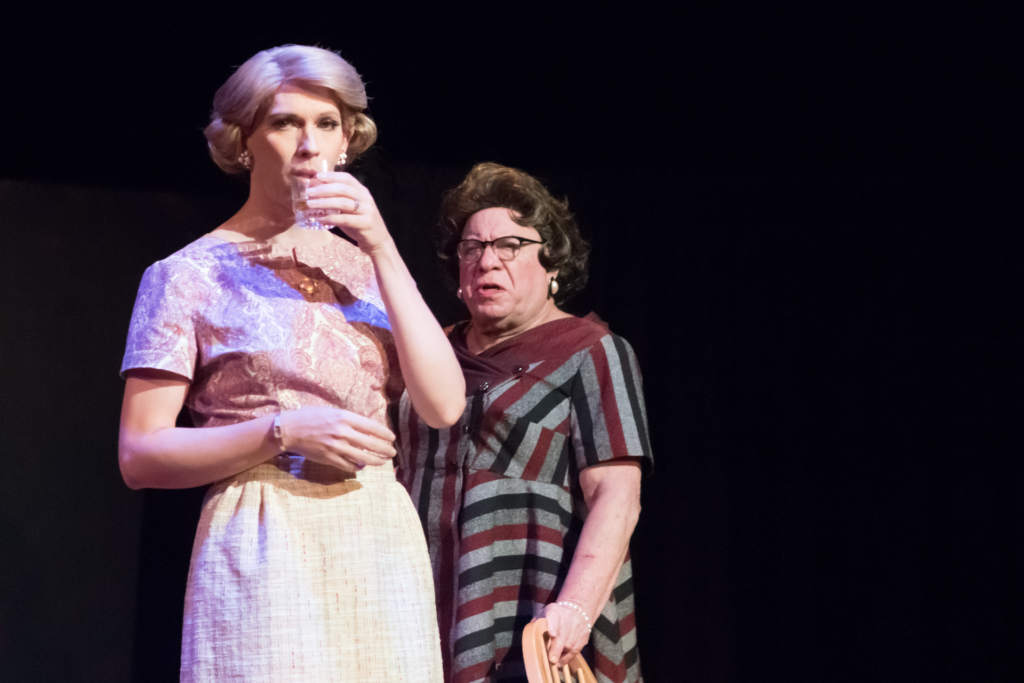 Spinning Tree Theatre’s latest production has undeniable curb appeal for those who’ve always wondered what favorite local players John Rensenhouse and Victor Raider-Wexler look like in heels. But when the novelty wears off, something more satisfying takes its place: Harvey Fierstein’s Casa Valentina, an engrossing 2014 play with a retro focus and feel.

The script is set in a remote region of the Catskills, where George (Rensenhouse) and his wife, Rita (Jan Rogge), run a private resort for ostensibly heterosexual crossdressers. It’s 1962, a time when simply wearing women’s clothing might land a man in jail — and has. One of the resort’s longtime benefactors, a magazine editor who goes by Charlotte (De De DeVille), regales the younger guests with stories of her imprisonment, laying the trailblazer guilt on thick. George — Valentina when he dresses — is under legal scrutiny himself, thanks to a mysterious packet of photos sent to his address.

The opening scene seems pasted from a classic comedy playbook: George and Rita reveal a dangerous secret (the resort’s going bankrupt) and scheme about how to convince Charlotte to keep them in the black. Bessie (Joe Wyatt), the class clown, enters in a housecoat and jeweled turban, overflowing with campy quips and Oscar Wilde quotes. Her banter with the other gals earns some of the show’s biggest laughs. “You are living proof the good die young,” she lobs at an older guest. (In Fierstein fashion, this can at times seem overly slick.)

The tone shifts with the entrance of Jonathon (Zach Sudbury), a first-time guest apprehensive about donning dresses in front of the crowd. With prodigious skill and gentleness, Rita and Bessie coax him first into a slip, then a dress, then a name — Miranda, after Shakespeare’s The Tempest. Watching Sudbury’s shyness slowly bloom into a sense of belonging is genuinely heartwarming. 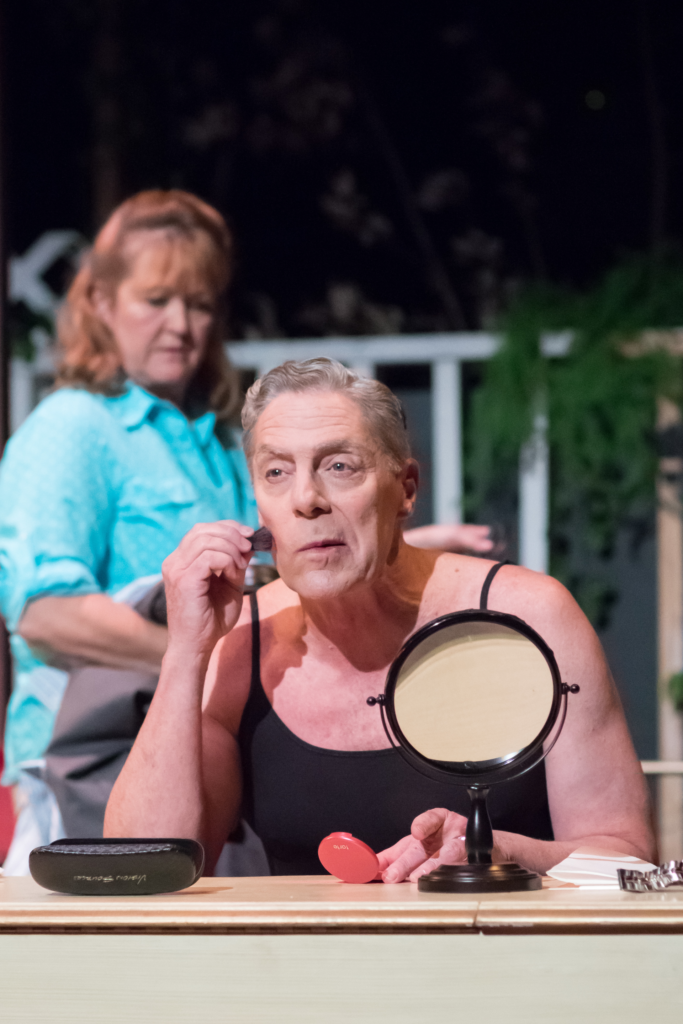 So is Spinning Tree’s cast. Rensenhouse, Rogge and Raider-Wexler are strong as usual, but I was especially impressed by Wyatt and by Andy Perkins, who plays the younger, more progressive Gloria. Perkins seems most comfortable onstage, adopting feminine gestures and expressions with a native’s fluidity. And Wyatt commands every scene (and frequently the other girls) as Bessie, the consummate “tough old bird” with a heart as big as her motormouth.

Good directing is often invisible, and the blocking here is smart and seamless. Co-directors Michael Grayman-Parkhurst and Nicole Marie Green exploit every inch of Eric Palmquist’s tiered and appropriately rustic set. Jeff Eubank’s sound design and original compositions capture the time period while smartly skewing toward nostalgia — for these girls, the resort is an idyll. And the costumes and makeup (courtesy of Emily Stovall and Shanna Jones, respectively) evoke each character’s style and relative comfort when crossdressing.

As frivolous as the premise might seem, Casa Valentina surprises in its sincerity and kind-heartededness. When Miranda emerges from her room looking like a baby drag queen at a funeral parlor, the girls aren’t catty — instead, they squeal about the opportunity to whip out their train cases and play makeover. To Fierstein’s credit, Rita’s character arc is drawn with just as much care and complexity. While George dotes on Rita, Valentina wants little to do with her; and as the play progresses, Rita begins to wonder whether she can compete with the “woman within.”

The script doesn’t shy away from political themes, but it also doesn’t browbeat its audience. One of the most compelling plot points centers on Valentina’s and Charlotte’s attempts to separate transvestites from “faggots” in the public imagination. Throwing in with gay men, Charlotte maintains, will make their fight for acceptance that much harder. Their discussion is neither preachy nor prescriptive, but the modern parallels are obvious — some gay groups were conspicuously tardy in their support of transgender issues.

Ultimately, Casa Valentina’s appeal lies in its soft touch and rough edges — in its recognition that outcasts can make the strictest wardens and in its sensitivity toward characters who make the wrong choices for the right reasons. Spinning Tree renders them faithfully, with some of the theater’s strongest directing and acting to date.