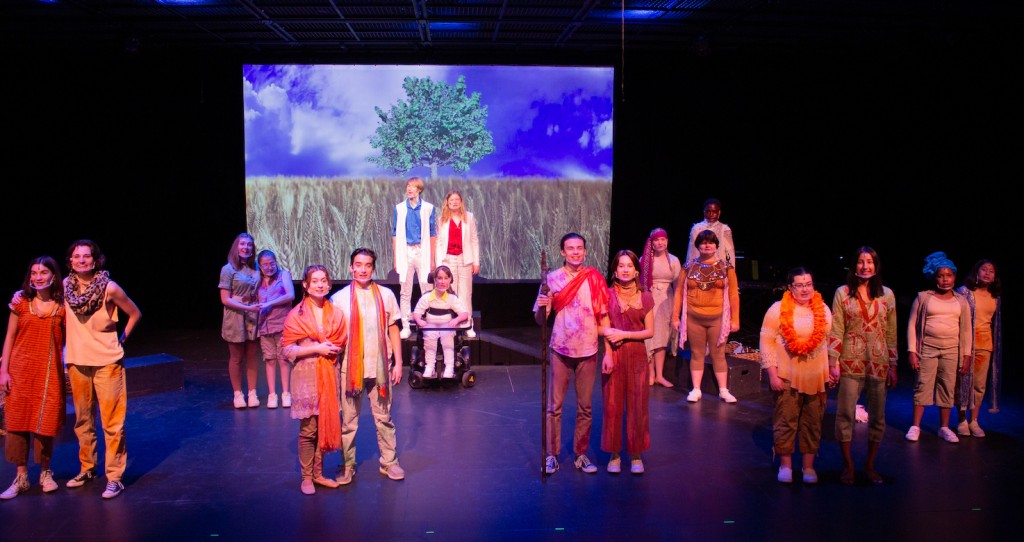 The cast of Children of Eden, Jr. // Photo by Alice Combs

The Book of Genesis, among its many themes, is about family—many, many families, and the challenges they face. Spinning Tree Theatre’s Children of Eden Jr., a compilation of family-centered Genesis stories (streaming July 16-18), is a fitting reflection of the theater’s new focus.

Spinning Tree produces the musical, by Stephen Schwartz and John Caird, through its inclusive theater camp and professional musical-theater training program, in collaboration with Variety Children’s Charity of Kansas City. Designed for teenage artists of all abilities, the program sets up an environment of support and camaraderie amid the honing of musical-theater skills. In a sense, the communal effort that has brought this show to fruition might even resemble a family-like affair.

Two years ago, Spinning Tree held its inaugural Youth Theatre Project, a two-week summer theater camp for teenagers aged 12-18, which was especially inclusive to people with physical and cognitive disabilities. That partnership with Variety KC, which advocates for children with disabilities, was just the first of what was designed to be an annual theater opportunity culminating in a fully staged production. In 2019, that show was Starlight Express.

Then came 2020. Not only was there no Youth Theatre Project that summer but also no live theater. At the end of last year, after nearly 10 years of producing plays and musicals, Spinning Tree co-founders Andrew Grayman-Parkhurst and Michael Grayman-Parkhurst decided, for the “foreseeable future,” to transform their theater into a year-round partnership with Variety KC.

Children of Eden Jr., filmed with multiple cameras by videographer Conor Tierney, who also designed the show’s projections, is the first production of this new direction. It was Spinning Tree’s first time back on stage in 15 months. 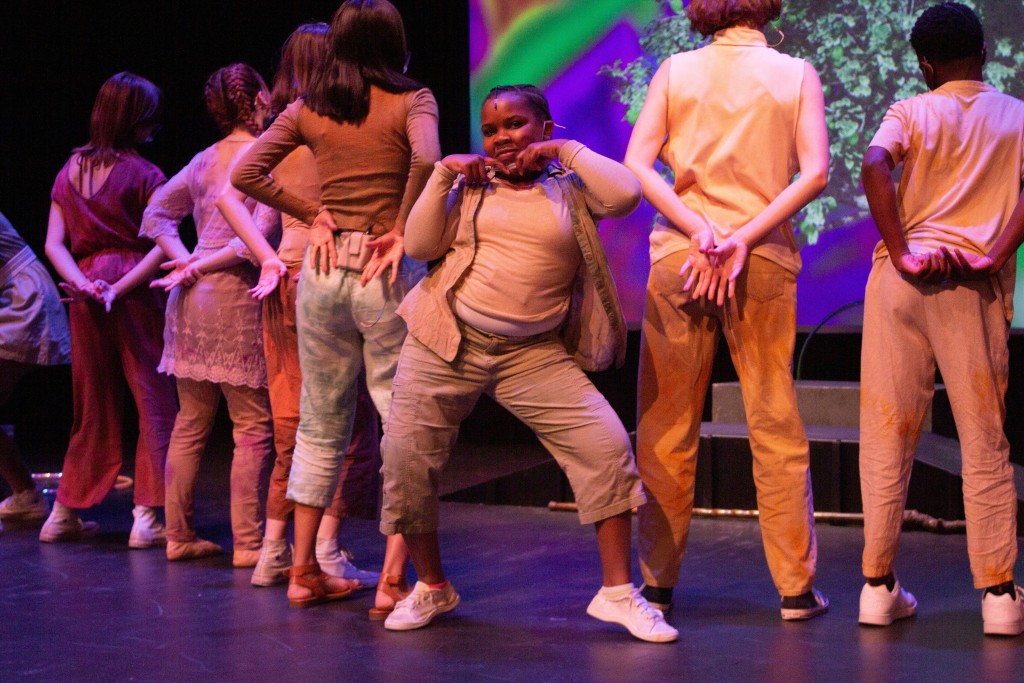 Aisatu Jallow and the cast of Children of Eden, Jr. // Photo by Alice Combs

Spinning Tree plans four productions during the year, plus a workshop in August that pairs young playwrights with professional adult playwrights. Andrew says they plan to have a director and a few actors “in the room” as well. The short pieces that result will be performed later in the season.

The purpose of the program with Variety KC, he says, is twofold: “to provide inclusive theatrical experiences to young artists of all abilities, while offering a professional environment run and designed by highly experienced adult artists.” That inclusivity includes socio-economic opportunities, too. The program is tuition-free.

The show is not a typical “Jr” version, Andrew says, with its “extremely challenging” score. Children of Eden Jr. is directed by Nedra Dixon, who herself appeared as Eve and Mama Noah in the American premiere of the show at the Wichita Center for the Arts.

“My long affiliation with Children of Eden, and the gift of having worked closely with its original creators, has afforded me the invaluable tool of getting to know and understand this show on a ‘like the back of my hand’ level,” Dixon says.

That’s helpful, given this production’s short rehearsal period—10 a.m.-3 p.m. Monday-Friday (with a break for lunch) for just three weeks.

“Because some of our young artists have limits to their attention and ability to focus on such demanding material for hours on end, it’s important to give them regular breaks, a reduced rehearsal day, and the weekend off,” Andrew says.

Dixon acknowledges that three weeks isn’t long “to put a spit-shine on a production.” Plus, the cast didn’t have the option of studying the score properly before rehearsals.

“It is very hard to find the one full recording of this show,” Andrew says. “They had so much homework every day in learning music and words!” 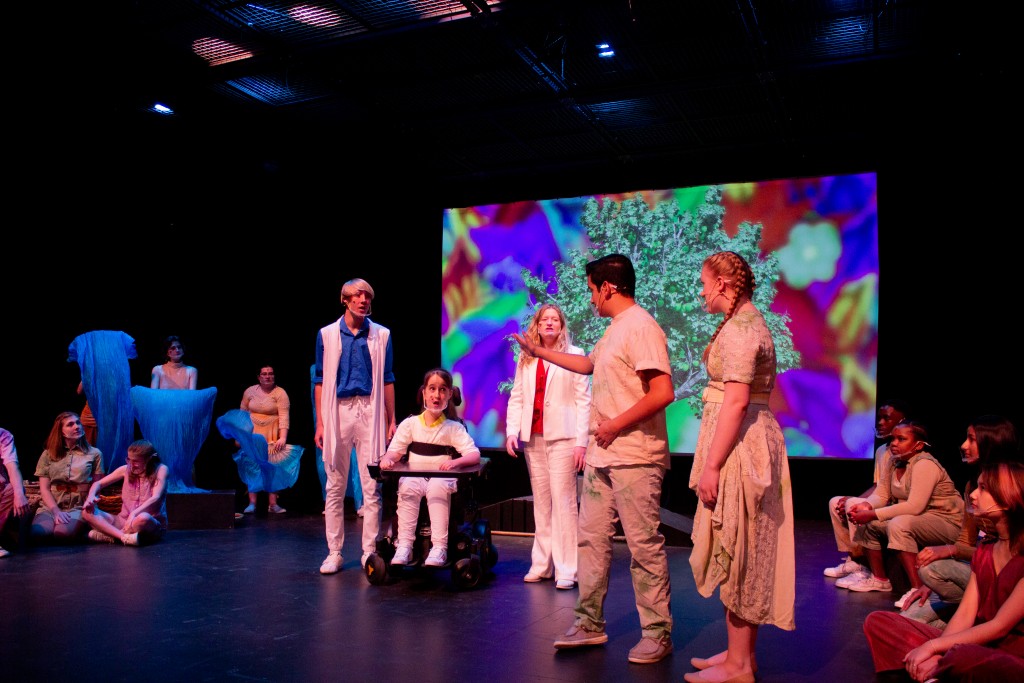 The cast of Children of Eden, Jr. // Photo by Alice Combs

Dixon and music director Pamela Baskin-Watson listened to each cast member sing on the first day they were all together, and they decided on the casting of 18 participants after rehearsal on day two. Two additional participants take part behind the scenes. That the cast and crew got the production up and going in that time frame—and have done it so well—is “a testament to their willingness to dive in fearlessly, day one, with a focus and fierceness,” Dixon says.

Dixon’s grip on the script enabled her to imagine new interpretations of aspects of the story. One of these insights is the casting of three actors, one male and two female, as God, depicting not only God’s “feminine sensibility,” Dixon says, but also God’s “reflection of all of us.”

Another result of some inspired thinking is the portrayal of the Snake. That wily beguiler in the Garden of Eden is typically animated by five performers manipulating a large snake puppet while also singing, dancing, and speaking dialogue. That kind of coordination is difficult, Dixon says, even for professionals.

Severo and Dixon conferred with costume designer Trustin Adams and properties designer Eric Palmquist, and settled on one long green evening glove on each of the five actors comprising the Snake, creating a snake illusion with synchronized “snake-charming arm movements.”

“Working with school-age performers has a place in the right ventricle of my heart,” she says. “They say, ‘yes’ and dive right in, and they don’t view the stumbling as obstacles. They pivot.” She also finds that they have much to contribute to the process. “Working with performers of mixed abilities is just like working in any environment,” Severo says. “You let the creation come from them, so they are invested, heard, and seen. As with any group, you can only create the space for something to happen—and it does.”

Several of the cast and crew who took part in 2019’s Starlight Express, onstage or behind the scenes, returned for Children of Eden Jr. The cast members’ rapport is as clear as their talent. But one thing Andrew and Michael have noticed this year is the level of stress carried by young people.

“Allowing them a space in which to focus on singing, dancing, and acting while feeling supported and encouraged hopefully inches their confidence up,” Andrew says. Like the best part of being a family.