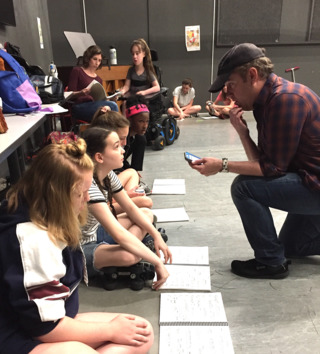 Starlight Express co-director Andrew Grayman-Parkhurst faces a clutch of teenagers. It’s day five of rehearsal for the Andrew Lloyd Webber musical, set to open in a week. “Safety first!” he calls out.

Some of the performers ride scooters; others move about in Heelys, roller skates, or Rollerblades; another gets around in a motorized wheelchair. This inclusive, mixed-mobility cast is precisely the point of Spinning Tree Theatre’s inaugural Youth Theatre Project, a two-week theater camp that culminates in a fully staged production. The intent is to make space for diversity and give opportunities to kids of all abilities.

Andrew Grayman-Parkhurst, Spinning Tree’s managing director, and artistic director Michael Grayman-Parkhurst (the other half of Starlight Express’s directing team) are partnering with Variety Children’s Charity of Greater Kansas City, which advocates for children with disabilities — physical and cognitive — and their families.

“Parents want their kids to be able to explore their passions,” says Deborah Wiebrecht, the group’s executive director. The demand, she says, “is huge.”

The collaboration between Spinning Tree and Variety KC was seeded several years ago, when Andrew and Michael directed two fundraising shows at the Midland Theatre for Variety. They started talking with Wiebrecht then about creating a theater program that would open up options for those served by the charity. Last summer, the two men staged The Wizard of Oz for Theater League, a production that included several Variety KC kids.

“We loved the experience of featuring kids of all abilities,” Andrew says, “and decided to create a similar experience on a smaller scale.” It’s an expansion, too, Michael adds, of Spinning Tree’s educational component.

Based on those earlier conversations with Wiebrecht, they contacted Variety KC and initiated 2019’s Youth Theatre Project. “It’s a dream come true for me and Variety KC,” Wiebrecht says. (The nonprofit is sponsoring the five participating through the organization and is contributing toward marketing costs.)

The show, written for adult performers on roller skates, is usually set in large arenas (think Vegas) and hasn’t been produced previously in Kansas City. But Starlight Express, when downsized, seems geared to the Theatre Project’s purpose.

“It’s about locomotion,” Andrew says, “how we get from Point A to Point B, and might that be interesting to study … how we each do that.”

Early on in the rehearsal process, the directors discovered that even the non-Variety kids — on scooters, roller skates, and Rollerblades — were challenged in “determining how to do moves that they had otherwise taken for granted.”

The theater camp — composed of teenagers aged 13-18, both disabled and nondisabled (this year, there’s also an 11-year-old) — enables participants to personally grow from the experience of working together. “It heightens compassion and empathy among the performers,” Andrew says. This year’s project has 21 players — 16 performers plus five additional youths working on the show (assistant directors, a sound operator, a makeup designer, and a social-media coordinator).

The teenagers who can move about without assistance want to be involved in the project as much as those participating through Variety KC, and many in the cast said performing with Variety kids was one of the main reasons for applying to the camp. That and the opportunity to do theater, which they love, and to work with Andrew and Michael.

“We refer to this as a heart-centered project,” Andrew says.

During rehearsal one afternoon, a girl with a cognitive disability “inserted herself into a number, a song her character wasn’t assigned to,” Andrew says. “She seemed to know the words and most of the blocking/choreography. We have tried to establish that, in our rehearsal room for this project, we ‘go with it,’ being ready to be there for each other.”

Many of the teenagers have professional or community-theater experience, while a couple of the Variety KC kids are making their stage debuts, he says.

Aubrey May, an eighth-grader, says she’s a “big extrovert” and loves being onstage. Her first experience performing was “a tiny show, in early elementary school,” and she has appeared in four school plays since, as well as Theater League’s The Wizard of Oz last summer. The wheelchair-bound artist isn’t as strong physically for the choreography, so she uses her face more, she says.

Robin Robles, a high school freshman and one of the show’s leads (he recently appeared in Spinning Tree’s Billy Elliot), says he wanted the experience of working with Variety kids. His co-stars echoed the sentiment, including Maggie Herber, a sophomore, who tries to do two or three shows every summer. Besides Starlight Express being a “fun musical,” she says, she sought the “rare opportunity to work with Variety KC kids.”

“Tolerance, diversity, acceptance — they’re lifelong skills,” Wiebrecht says. In seeking diversity, Michael and Andrew asked the students at the outset whether they preferred to portray male or female roles. And one of the show’s performers, home-schooled ninth-grader Juliana Allen, has learned (from ASL interpreter Lisa Lehnen, at Deaf Expression) how to sign one of the songs for the hearing impaired.

The Youth Theatre Project is just the beginning, Andrew says, of what they see as “a new normal in producing and performing theater.” (At this year’s Tony Awards June 9, Ali Stroker won Best Featured Actress in a Musical for her performance in Oklahoma! She’s also the first wheelchair-bound performer to ever appear on Broadway.) One of their goals each season, he says, will be to “gradually increase the ratio of Variety kids, so that we can get closer to 50-50.”

Kansas City has been at the forefront of inclusion, Wiebrecht says, though it has been hard to break into the arts here. But, she adds, “the culture is changing.” One day, she says, “It won’t be weird, there won’t be staring. People will be asking, Why no ramps?”