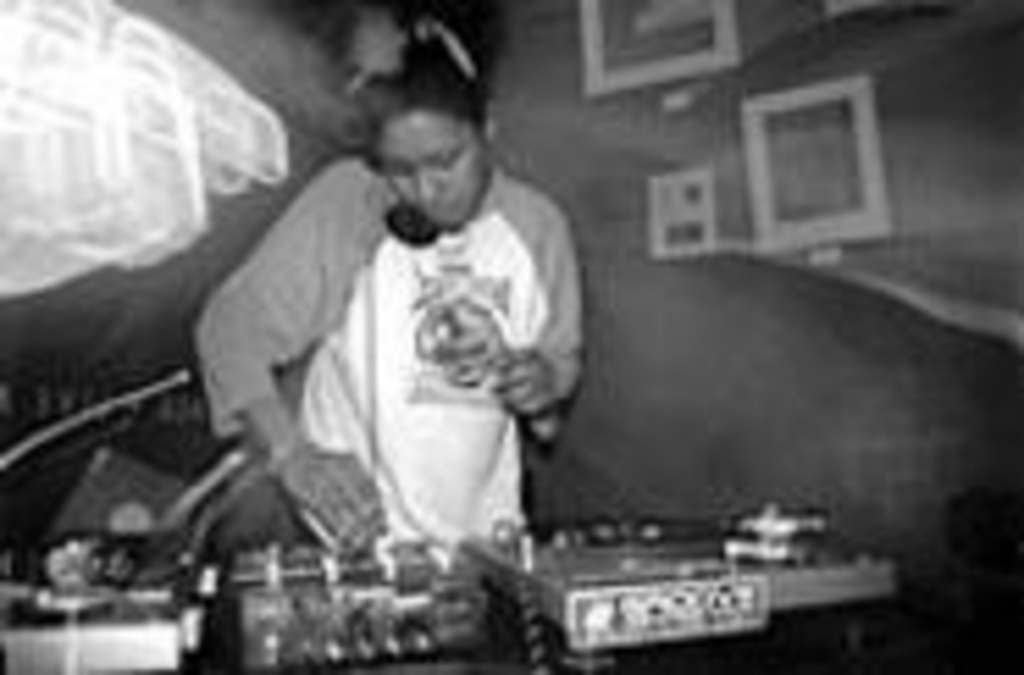 Princess Superstar titled her current tour, which recently stopped at the Hurricane, “DJs Are Not Rock Stars.” Technically, that might be true, but big-name spinners attract arena-sized crowds and inspire more motion than a mosh pit. A few turntablists exude charisma (DJ P, Kid Koala), so spectators’ eyes remain fixed on the stage while their bodies gyrate to the rhythms. Most stay in the shadows, though, sacrificing attention and applause for the less direct cause-and-effect relationship between their beats and the writhing masses. But it takes a certain brand of DJ to embrace the art of becoming invisible.

When they’re placed in a setting that discourages dancing and positioned with neither elevation nor a central location, DJs can essentially disappear. Local jazz ensembles that gig at restaurants might get stiffed when it comes to ovations, but at least they gather scattered claps at the end of each tune. DJs in similar settings receive no recognition when they step behind the turntables or when they leave, and little if any during their stays.

It’s a scenario that might leave some spinners DJected, but the regulars at the Cup and Saucer’s Trip-Hop Turntablism Wednesdays actually enjoy the anonymity — to an extent. cQuence, whose organic blend of drum-‘n’-bass and soulful vocal tracks fuels the evening’s home stretch until closing time at midnight, recalls the weekly event’s meager beginnings.

“When we first started, we’d be lucky to have three to five people,” she says, flashing back to December 2001. There was an upside to the tiny turnouts, though: She and fellow drum-‘n’-bass enthusiast DJ Slater didn’t have to sift through conversations while using far-away speakers to mix their beats. The venue’s steady stream of singer-songwriters — standard fare for the coffee-house crowd — already enjoyed the room’s easygoing acoustics, solid sound system and neighborhood regulars, but its Wednesday tenants required additional equipment and imported audiences.

Addressing both of those needs are Eclypz, a breakbeat specialist, and Flotilla, whose diverse sets swing from simmering soul to deep-groove funk to underground hip-hop. When Slater moved to Wichita, the duo joined cQuence to form the current triumvirate, which saves space for guests between 10 and 11 p.m. (DJ True, a veteran of Kansas City’s thriving house scene, fills the slot this week.) Eclypz and Flotilla supplied new monitors and drew from their fanbases and friends to exponentially increase the crowds. By June 2002, cQuence says, “we had a riot goin’ on,” with forty to sixty people packing the cozy confines.

As riots go, though, the Cup and Saucer outbreaks are low-key affairs. Drop-ins line the bar and sprawl across comfy couches, chatting, reading magazines or playing chess. Choreography is limited, so contortions are encouraged; when one female listener wiggles in the corner seat at a window table, she resembles the serpentine star of Mitsubishi’s passenger-seat-fever commercial.

Occasionally, guest DJs accustomed to footloose feedback become frustrated by the Cup and Saucer’s clientele. “It’s easy to ignore the DJ in there,” cQuence says. “But unless you’re a turntablist who’s going crazy, playing records isn’t all that hard. You’re not sweating, rocking out and really getting into it. People try to make DJing more complicated than it really is.”

A few DJs might bristle at cQuence’s nonchalant appraisal of the effort her art requires. But low-ego showcases such as the Cup and Saucer’s can only help the working DJ’s cause, convincing other coffee houses and restaurants that such sets can entertain the interested while staying unobtrusive so as not to offend anyone else.

Besides, there are some advantages to performing in such low-pressure surroundings. If your needle breaks, if your record skips, or even if you dance dorkily to your own creations, no one will notice, let alone heckle.

Trip-Hop Turntablism Wednesdays represent the epitome of Princess Superstar’s slogan about DJs not being rock stars — without the irony of attaching it to a headlining, $10-a-ticket tour. There’s nothing less rock-starlike than casually performing in front of friends, unwinding while they unwind, and expecting nothing other than an immeasurable contribution to the room’s atmosphere. Concert attendance is almost always recreational for the spectator; it’s rare — and refreshing — when the artist also gets to view a performance as leisure.