If you parkour-dance your way out of the theater, we won’t judge you.

By now, you’ve probably seen those ridiculous Nicole Kidman AMC ads, the ones where she walks through a conspicuously glamorous, conspicuously clean multiplex and pretends to eat popcorn while talking about the transportive magic of the movies, and how “heartbreak feels good in a place like this.”

She’s right, of course, that film has that power—I wouldn’t be writing about it otherwise. However, it’s been a while since we’ve seen anything that wasn’t heavy, disappointingly generic, or even properly color graded. Movies haven’t felt transportive for some time.

If, like me, you haven’t felt truly excited by a film in the last six months, I’m here to tell you: Steven Spielberg’s West Side Story is the answer to all your woes.

Like the classic film it’s remaking, it is bold, colorful, and filled with life. It’s more diverse than its cinematic forefather, avoiding the original’s casting issues.

It does have Ansel Elgort, but hey, very few movies are perfect. In most respects, this West Side Story soars, and brings timely consideration to classic material.

The film starts by giving greater depth to the story’s introduction of its warring Jets and Sharks. This New York neighborhood isn’t just a rough part of town, but a slum being torn down to make room for Lincoln Center, and a bevy of accompanying apartments none of the block’s current residents could hope to live in.

It’s a war that addresses not only the discrimination against the Puerto Rican population, but the failed systems and class destruction that have helped that resentment along. Any distinct similarities to our country’s current situation are fully intentional.

Against this setting, we get our mid-century Romeo and Juliet retelling. The Jets, led by Mike Faist’s hot-headed Riff, are sick of their Puerto Rican rivals the Sharks, and their equally volatile leader Bernardo (David Alvarez).

They agree to a rumble, one that requires the presence of Jets co-founder Tony (Elgort), who’s trying to stay on the straight and narrow after a stint in jail. Tony’s avoidance of trouble is challenged when he falls in love with Bernardo’s sister Maria (Rachel Zegler), who returns Tony’s affections despite the protestations of Bernardo and his girlfriend Anita (Ariana DeBose).

It won’t surprise you to learn things do not go well.

The urban playground elements of the original film remain fully intact here, with performers leaping balletically around streets, roofs, warehouses, and school gymnasiums to those timeless Leonard Bernstein and Stephen Sondheim songs. They’re accented by incredible cinematography by frequent Spielberg collaborator Janusz Kaminski, with vibrant color and breathtaking use of light and shadow.

Spielberg also chooses not to subtitle any of the film’s considerable Spanish-language dialogue, a bold decision of a piece with the film’s message of overcoming differences. If you’re worried about missing anything, you needn’t be; even the most basic grasp of Spanish will give you everything you need to get by.

The cast is a wonder, providing great exposure for talented performers whose stars this movie will likely launch into the stratosphere. Zegler is sweet and energetic as Maria, with impressive pipes that frequently dominate her scenes with Elgort, who is trying his best but remains mostly inert. Faist is impressive as Riff, in a performance that echoes Russ Tamblyn’s athleticism, but with effortless confidence that makes the role his own from his first seconds on screen.

The movie’s real standout, however, is DeBose, who’s been making her way up the ranks over the last year with roles in The Prom and Schmigadoon!, and practically explodes here with Audra McDonald-level talent. Like Rita Moreno before her, DeBose’s Anita is charismatic, emotional and joyful, excelling in a way that leaves you slack-jawed with everything she’s doing in a given moment. It’s like watching an Olympic gymnast performing a flawless floor routine.

This doesn’t even touch on the myriad delights Spielberg and his collaborators—including screenwriter Tony Kushner—bring to West Side Story that amplify its relevance and dynamism.

Some things are best left for viewers to discover on their own. It should be stated, however, that this is a movie that demands to be seen on the biggest screen possible.

If you feel safe doing so, see this in a theater where the images can wash over you like a multicolored tidal wave. This is what movies are supposed to do. This is how they’re supposed to make us feel.

Do not sleep on it. 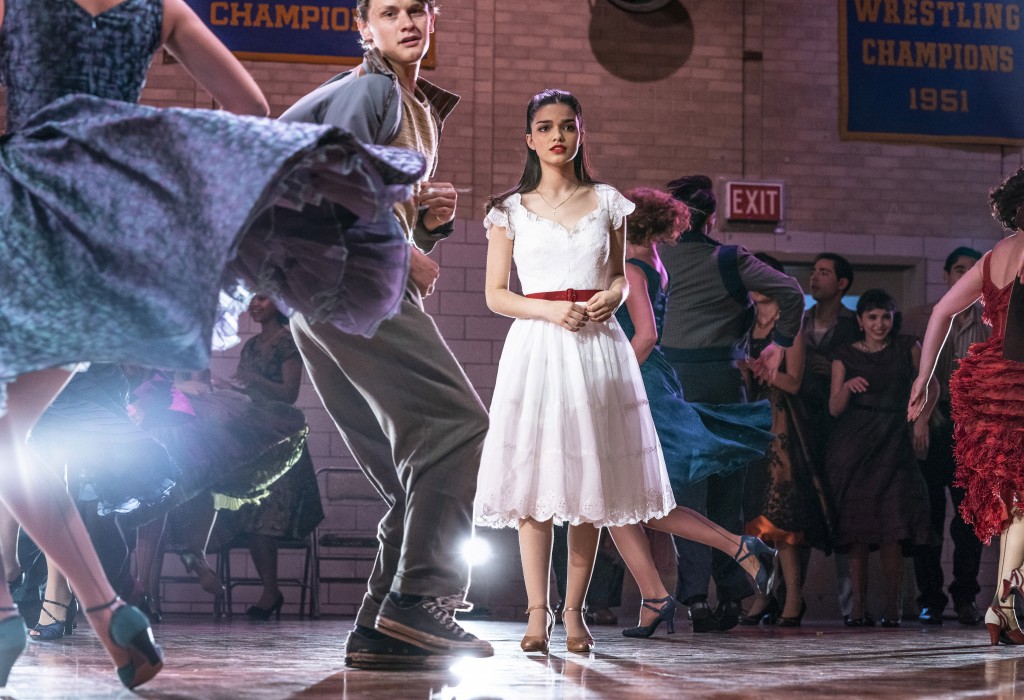