I’m not a good food reviewer. Most of what I have to say about food is “Yum, that is indeed food!” That’s why we employ people like Liz Cook and April Fleming, who can do the words better.

That said, I just adore diving into a new set of beverages. There’s a long-standing joke about Millennials that they need four or more beverages in front of them at all times. That’s me. Water, a coffee, a fizzy drink, a flavored drink. Sometimes more? So when someone wants to send me new beverages to throw down my gullet, I’ll always take them up on the offer.

Sour Lemon is an apple cider vinegar-based lemonade made here in KC. There are seven flavors and the exciting twist is that the drinks come in condensed forms (about the size of a CBD bottle) that wind up making a pitcher or more of the flavor when water is added. Condensed lemonade apple cider vinegar variety backs are not the kind of thing I’ve ever encountered, and this was a delightful journey for me.

Callen Johnson was the local beverag-ician who dived into this. She tried and failed at this endeavor for a while, in attempting to make a perfect pink lemonade for her family. When she cracked the formula, she started producing these summery sugar-less flavors out the back of her husband’s chiropractic office.

Now, she’s making every bottle by hand in her own space, with her four children helping out. That’s… pretty great, right? Love to see a local family done good, and the output is well worth your time.

The Sour Lemon company opted for the condensed flavors instead of pre-made bottles to cut down on shipping costs, which is a cool idea. That means that acquiring the variety pack with 7 flavors for only $28 is a pretty neat option. 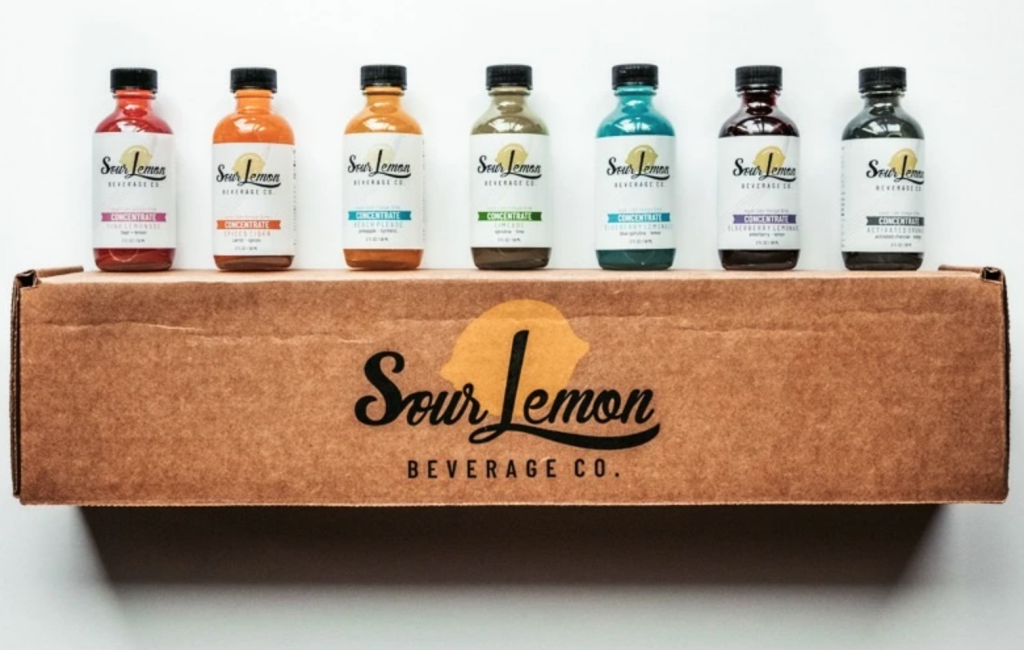 Pink Lemonade: I was drinking this in the middle of rewatching Bridesmaids, and has just seen the scene where Wiig freaks out over how delicious the pink lemonade is at her enemy’s party. This might have hardwired my brain into thinking this was the top flavor? I mean, it probably is! But I felt replenished on a Soul Level and I think the TV tricked me into some small part of that.

Blueberry: Blue is my favorite flavor in general. Not blueberry, but anything that is colored blue. Mostly because that sorta thing rarely exists naturally in any form, so the flavor of “Blue” has just had its own bizarre evolution over the years. That said: Blueberry takes exceptionally human. All of these flavors are natural and devoid of additives, so it was almost bizarre to drink a blue-thing that wasn’t at least partially poisoned—and even good for me?

Beach Please: This is absolutely the worst thing I’ve ever tasted. What went wrong here? This tastes like sand fought toothpaste and lost. My god, did I make someone angry? (I checked the instructions and yes, I woefully messed up the ratio of condensed flavor to water. This one is on me. My bad, my bad. It’s almost certainly as good as the rest, I bungled this.)

Elderberry: Elderberry has one of the least appetizing names in the fruit kingdom. That said, if you can pull off one of the more complicated berries, then good on you? So. Good on you, Sour Lemon. Life gave you elders and you made elderberries. Is that how the phrase works? Sure.

Activated Orange: Anything that hints as been influenced by, say, activated charcoal is already not trying to appeal to your sense of flavor over your sense of health…healthiness? Regardless, this was one of the surprise flavors that I’d held off ’til near last, thinking it would be a bit too hippie-dippie to be good. Was wrong here. Not for the same reason as the Beach Please. But still. A solid drink, especially first thing in the morning when something like a limeade would be a bit much.

Limeade: This is a bit much, and I love it. It will not surprise you to hear, but a solid number of these condensed drinks make excellent cocktail mixers. Limeade is an all-timer, but extra delightful for its ability to transport me back to underage drinking in high school, when hiding a bit of vodka inside a Sonic limeade. An odd trip I did not expect to take. Top marks; will order again soon.

Spiced Cider: Easily the most complicated flavor here, which I had expected to go to Activated Orange. Cider is everything you’d expect, but more so, everything you’d hope for it to be. I’m genuinely impressed by the palette of ingredients I could taste in a spicy, cinnamon tinted fall beverage that I diluted myself into a full pitcher? Top-notch. This one wasn’t my favorite flavor, but it is the most impressive. Congrats, Mrs. Johnson. I believe you might be a witch? Thank you for sharing.