Songbird hates you for taking the pandemic seriously 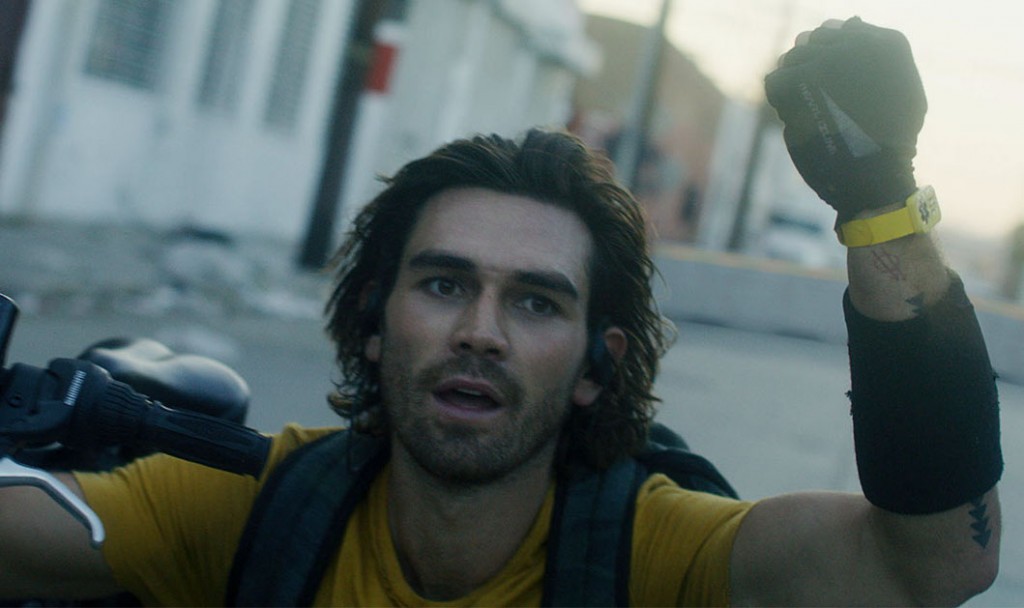 There’s certainly something to say about a film’s timing, and Songbird misses what should be obvious—don’t release a film about an apocalyptic pandemic to an audience currently in the middle of one.

Directed by Adam Mason, written by Mason and Simon Boyes, and produced by Michael Bay, Songbird was made in the midst of COVID-19, when cases continued to rise and thousands more died. In the film, it’s the year 2024 and COVID-23 has effectively shut down all of civilization as we know it. The imagery of abandoned highways and derelict buildings are reminiscent of practically every zombie movie. Still, some advancements have been made, like the sterilized package drop box presumably every home has now. Nico (KJ Apa) is a courier working for Lester Gets (Craig Robinson), and designated immune by a yellow wristband. Through his job, Nico meets Sara (Sofia Carson), who’s quarantined in her apartment with her grandmother.

In the film’s COVID world, everything is exaggerated. People are made to quarantine, but if you leave your home for any reason and you don’t have a yellow wristband, you’re either killed or taken to a “Q Zone,” explained in voiceover to mean “quick death.” The United States Department of Sanitation are the villains, there to steal you from your home if you miss or fail your 9 a.m. temperature checks.

The virus is even more contagious here than in real life, killing you in 48 hours, but some people are immune (shockingly, science plays no part in this film.)

The safety measures described in the film, while extreme, resemble the safety measures we’re supposed to be taking today—wearing a mask, staying home, not gathering for holidays, washing hands, etc—and turn them into the ultimate loss of freedom. To break them means you’re the real hero of this story.

This is all incredibly offensive to the people who are on the frontline of this pandemic, to the people who have died from this virus and to their loved ones, and to everyone staying vigilant in this reality the pandemic has forced us into. Songbird punishes people who get sick or exposed, and turns the non-immune people against the immune. Nico even mocks some non-immune soldiers for not being as healthy as he is. To push forth a narrative in which a healthy person mocks a sick or at-risk person is a dangerous precedent. No such consequences are handed to Nico for this mentality. How many times must we emphasize that you should care about other people?

If I were to glean any kind of intention behind Songbird’s existence, I suppose an argument could be made that it’s attempting to show how things could get worse if we don’t act now. That message is far from hitting its target, however. Instead, it centers a group of people that ignore safety precautions because they are tired of being inside and wish to regain their freedom. A major plot involves a rich couple, played by Demi Moore and Bradley Whitford, selling illegal yellow immunity wristbands to anyone who can pay, no matter if they are sick or not.

When Nico successfully acquires these for himself and Sara, we’re supposed to cheer. I can’t help but think, however, of everyone whose lives they’ve endangered by only thinking of themselves. Moore’s character has an immunocompromised daughter; in the final act, Nico enters their home in order to obtain his wristbands, with no thought to the daughter inside. When Moore confronts him about the risk he’s brought into their home, he still manages to walk away with the moral high ground, a pretty glaring “fuck you” to actual immunocompromised people.

Setting this very real premise in the apocalyptic genre creates an unintentional message that hey, things could be worse. At least our highways still function, and our buildings are still standing. It ignores what’s actually happening today. Forget the doom and gloom aesthetic of a zombie film. People are dying right now, alone in hospitals without family. We don’t need a bad movie to remind us that some people are tired of quarantine. The hundreds of thousands of deaths tell a pretty clear story already.

The film ends with quotes like “We weren’t just delivering packages, we were delivering hope” and “Don’t ever give up”—empty platitudes from a film that doesn’t care about the real people affected by this pandemic, and the many communities that have suffered the consequences of actions taken by people like Nico, Sara, and the rich people breaking the rules to suit their needs.

I have no idea who this film is for, but if the alt-right and anti-maskers were to trust Hollywood again to see Songbird, I suppose this one’s for them.