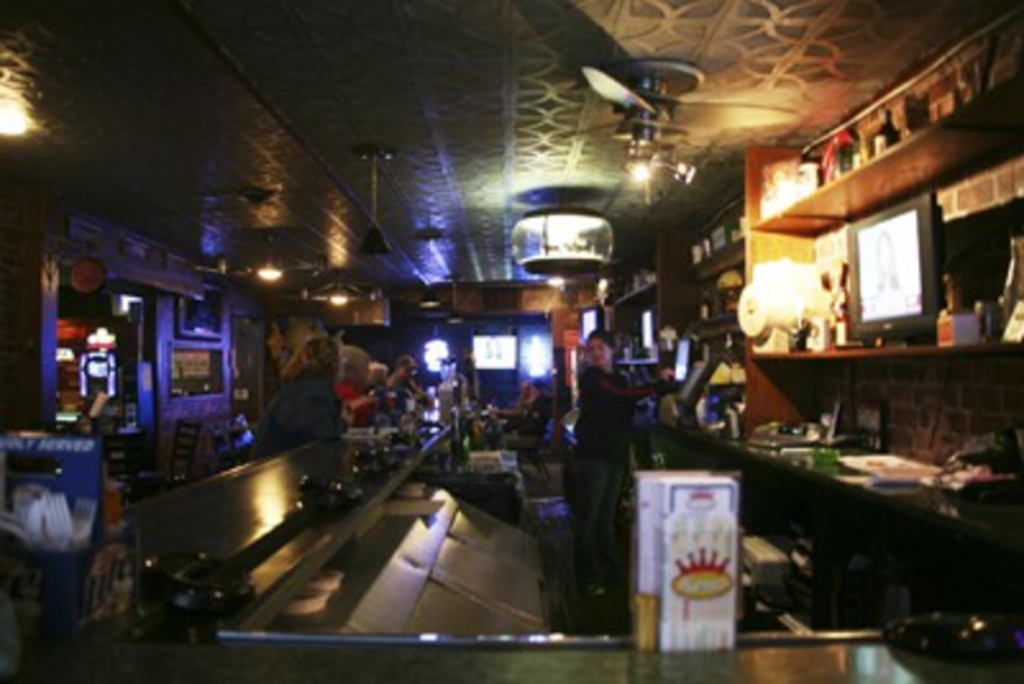 I have friends who prefer to eat their dinners while sitting at a bar instead of in a restaurant’s dining room. While I agree that the bar is a terrific spot for a single diner — one never feels so obviously solo while perched on a bar stool — I’m more of a table-and-chair guy myself. Still, I must confess that I do enjoy eating in saloons no matter where I sit. I may not be stumbling woozily off bar stools anymore, but even as a nondrinker, I enjoy a bar’s casual camaraderie, unpretentious and often comforting food, and generally low prices. “Show me some neon beer signs and a dirty ashtray,” a friend of mine used to say, “and I’ll show you the best hamburger in any town.”

And not just the best burger, although that American icon seems to be the standard by which most bar food is judged. I love hamburgers, but there are saloons in town that serve fare that’s downright glamorous — without a single fried jalapeño popper or a plate of nachos to be found. Sometimes I don’t trust those highfalutin bistros that pass themselves off as upscale saloons, but one Westport joint walks that fine line between the hoity-toity and the earthy. One80 Lounge is a good-natured storefront taproom where chef Sean Leventhal aspires to culinary greatness.

I’ve never had a bad meal at One80 — or disappointing service. And that’s saying a lot. You might raise an eyebrow (I did) at some of the more elegant offerings here: praline cheese truffles, artichoke bisque, five-cheese gnocchi. The fancy items are offered along with such bar grub as a great grilled patty melt, hand-cut fries and a Kansas City strip. I stopped in for a late lunch one afternoon, craving those One80 double-stacked black angus sliders on toasted English muffins, and was handed a smaller list of the daily specials. A brutal, icy wind was blowing around that day, and the soup du jour — old-fashioned beef and barley — caught my attention. My server assured me that it was terrific and soon presented me with a good-sized porcelain crock brimming with a fantastic soup, generous with fat, tender hunks of beef. That day’s pasta special was equally wonderful: gnocchi in a blue-cheese cream sauce with beef tips. It cost a little more than I wanted to spend for lunch but was well worth it — pillows of potato dumplings smothered in the most ridiculously rich, luscious blend of thick cream and subtle blue cheese, with bite-sized pieces of filet. Both dreamy and comforting at once.

One80 has class, but it wouldn’t pass muster as a bar and grill in the cinematic sense — you can’t imagine Humphrey Bogart slicing into a T-bone there, for example. A little closer to the film noir sensibility of a saloon with food is Ernie’s Steakhouse & Kross Lounge in Sugar Creek. It’s a no-nonsense small-town bar with a tidy little dining room attached. Ernie Wells and Sam Cross opened the bar side of the building in 1945 (the same year that two movies about drinking joints, Duffy’s Tavern and The Stork Club, were released); it’s decorated with neon beer signs and a life-sized, inflatable Mizzou Tiger. You can eat at the bar — and still smoke! — but most customers prefer to make their way down into the dining room, wandering past the pool tables and the machine with the mechanical claw that halfheartedly swipes at stuffed animals.

“It used to be a grocery store a long time ago,” our waitress told us. Later, Ernie bought out Sam’s share of the bar and, in 1963, turned the building into Ernie’s Steakhouse. My friend Bob’s boss, Becky, insists that Ernie’s has the best bar food on the east side of town. I might not go that far, but the joint does serve the biggest, meatiest and hottest chicken wings in the metro, hands down. Plump onion rings are great here, too, served with a horseradish-doused cocktail sauce. And I fell in love with a bizarre little starter called broccoli cheese puffs — kind of like broccoli cheese soup embedded in a deep-fried tater tot.

Dinners weren’t so terrific, though Bob raved about the fried chicken breast because it was juicy under that crunchy crust, and the mashed potatoes could pass as almost perfect. (“They’re not really homemade,” the server had explained, “but they taste real.”) Truman ordered liver and onions that didn’t meet his expectations — “It’s overcooked and salty,” he sniffed. And my meatloaf was so dreary and dry, it might have dated back to 1945. On the upside: Ernie’s serves Golden Boy pies, and my slab of silky chocolate cream made up for any disappointment caused by the meatloaf. Truman gave the place a thumbs-down, until he won 50 cents from a pull-tab ticket that he bought from a machine in the middle of the room. Then his mood improved a lot.

Another bar paying homage to the University of Missouri is Willie’s downtown. (The original is in Columbia.) I didn’t have especially high hopes for one late Sunday afternoon lunch there, but the menu was interesting and the food turned out to be damn good. There was a frat-house flavor to the décor (and a lot of the patrons), but the service was attentive and the chairs were comfortable. Customers can buy an ice-filled bucket with five beers for 15 bucks.

The “world-famous wings” — Willie’s description, not mine — were pretty good if not globally famous. They were meaty and just fiery enough, though the accompanying blue-cheese dressing tasted like something processed at a nuclear plant. The onion rings were excellent, though something called cannelloni bites, filled with an unrecognizable blend of minced chicken and artichokes, seemed a little too creative for their own good. And mine.

Willie’s menu lists its pork tenderloin as “a local favorite.” I have my doubts: It was dry, flavorless, blah. “You should have had the quarter-pound Scimeca’s Polish Sausage sandwich,” a friend advised me later. “It’s out of this world.” I’ve duly added it to my list of things I must eat before 2009.

The burgers at Willie’s? Superb. I could eat one of their fine pub burgers every day.

The most un-saloon bar in town is probably the small, tastefully appointed drinking space at the front of Brookside Avenues Bistro, which my friend Astrid dismisses as “very European, incredibly snotty.” But I stopped in with Franklin and Antoine one Saturday night after a movie, when another bistro in the same neighborhood was out of almost everything on the menu at 9 p.m. — and one of the customers had fallen down the basement stairs. “Bad vibe,” Franklin said as we fled the joint.

But Franklin wanted bistro fare, not bar food. What the hell, I thought. Let him eat pomme frites and steamed mussels at Avenues. And he did, delighted with every bite. Antoine argued that the potatoes were french fries rather than the actual double-fried frites one might find at Le Bastille in Paris. “But really good french fries,” he clarified, “with wonderful dipping sauces.” Franklin rolled his eyes. “He’s never been to Paris,” he whispered. Franklin has been to France, and thought that chef Joe Birch’s fat mussels steamed in a broth of wine, garlic and lemon juice were ooh la la. I worked on a wildly decadent macaroni and cheese — a classic gratin, really, studded with big chunks of lobster meat. And instead of a burger (Avenues Bistro makes it with angus beef and veal here), I shared a bowl of shrimp in a runny spinach-and-wine sauce, served with a wonderful buttered and grilled ciabatta toast.

“It’s not bar food in any traditional sense,” Franklin said on our way out, “but sometimes, damn it, your self-worth demands more than a burger and a beer.”

Perhaps. But not very often.