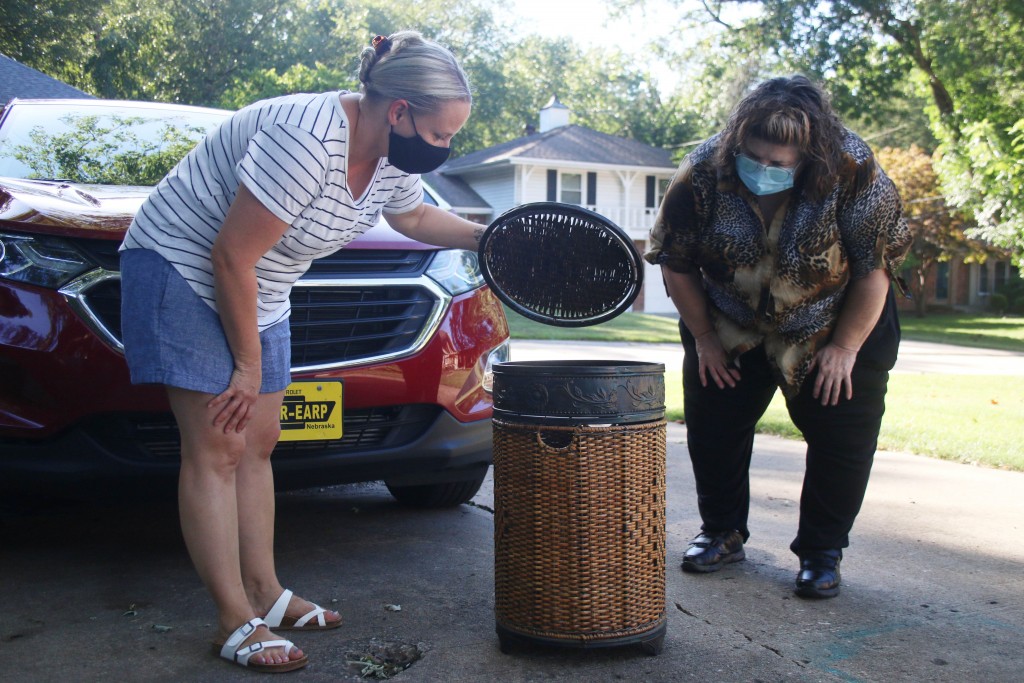 Overland Park resident Lisa Dimond checks out a basket Cyndi Norton dropped off as part of a Buy Nothing exchange. // Photo by Beth Lipoff

You might be committed to zero waste or finding the budget for new things a little tight these days. Maybe you’re interested in meeting new people in your area. Whatever the reason, membership in Buy Nothing Project and Freecycle groups has been on a major increase.

The philosophy? Exchange things in good condition that you don’t want anymore with other people in the same networks so no one has to buy new stuff. Selling items for money in these groups is forbidden.

Some Buy Nothing groups in the Overland Park area got so big that last year, they split off into smaller groups to make them more manageable, going from a total of three local groups to five.

For Buy Nothing, there are specific geographic boundaries for each group.

“I don’t have to worry about someone being way out in Blue Springs. If I receive something, it will be right here in my area,” says Kathy Hopewell, a moderator for one of the Overland Park groups.

Part of the philosophy is that by sticking to a small geographic area, you’re literally getting to know your neighbors with each exchange. Sometimes, that’s good.

“This is more about building relationships [than other groups], engaging the community, and it’s invaluable. It’s irreplaceable,” Hopewell says. “You start out thinking it’s just going to be about stuff, and it turns out it’s not about stuff. You connect with people.”

Prior to the pandemic, porch drop-offs weren’t really the Buy Nothing way. They were encouraging interaction. Drop-offs have become more common now as part of social distancing.

Sometimes, geographic barriers can exclude people. Jamaica Collins has helped run an unofficial Buy Nothing group in Kansas City and just recently started an official group for the eastern and northeastern part of Kansas City.

“We realized that there was a hole in the official Buy Nothing groups where the boundaries didn’t cross over into some of the lower-income neighborhoods,” Collins says.

That’s why her unofficial group doesn’t have the specific geographic boundaries an official group would have. She doesn’t think Buy Nothing is reinforcing inequalities on purpose—it’s just a result of the way the city has developed.

“The official model was designed to be hyperlocal, neighborhood-based. The problem with that is it limits groups to that area. Since Kansas City was historically segregated and redlined, it kept certain people out of those groups,” she says.

She’s found many interested participants. Her unofficial group had about 6,000 members at the end of August. Overall, Buy Nothing groups on the Kansas side have about 7,700 members, and those in Missouri have approximately 8,500. The metro area Freecycle group has another 2,800.

Freecycle doesn’t have such specific geographic boundaries as Buy Nothing. As such, it also doesn’t have the push of getting to know your neighbors either—it’s more of a straight-up exchange.

Freecycle predates all the metro-area Buy Nothing groups; its Facebook group has been around since 2012.

Jenifer Calandra is an administrator for the metro area’s Freecycle group but also participates in a Buy Nothing group.

Calandra says, “[Buy Nothing] is focused more on people who are literally trying to not purchase anything besides the absolute necessities. It has a little bit different mission and principles [from Freecycle]. It’s about strengthening community, sharing and expressing gratitude, and learning people’s stories.”

She adds: “Freecycle can be like that. Probably in its original form, it was, but I think, in the group, there’s a very different viewpoint.”

Women make up the larger part of these groups, but there are some men. Hopewell says she’d love for more men to participate. Otherwise, it’s hard to pin a demographic on them.

In a Buy Nothing group, people who want an item being given away might share why they want it, and then the giver chooses someone. They might even let a post sit for a few days to get more responses, and they are not bound to gift their item to the first responder.

“With the Freecycle group specifically that I’m in, there’s not really an emphasis on listening to people’s stories to choose who you want to give an item to, or letting it sit for a few days. I feel like it’s more ‘pacey,’ which is not necessarily a bad thing, but it does mean you need to be online all the time to find [items],” Calandra says.

For the most part, people seem to give more often than they ask to receive in both Buy Nothing and Freecycle groups.

One popular event in Buy Nothing is a sort of round-robin of clothing.

A member starts the trade by putting clothing of a certain size into a bag, then passes it on to someone else. The second person might take a few items out but also add some. By the time it gets back to the original person, it’s got a completely different set of items in it, but everything is in the original size.

Local group administrators have seen very few people try to abuse the system. Members are quick to report inappropriate posts so that the groups stay on topic.

Collins is impressed with “how generous they are.” She says, “The things people are willing to give away or donate, the quality—it’s never trash.”

“It’s not items people are like, ‘I’m going to throw this in the trash if no one comes.’ These tend to be quality things people do want that are lovely to have, usable, and in good condition,” she says. “Maybe that’s a misconception that if someone’s giving something away for free it’s probably not good quality, but that’s not at all true, based on my experience.”

It’s not always a physical giveaway. Sometimes people will lend things, like a paint-sprayer, that they’ve used just once. In one group, a woman with terrible allergies needed help mowing her lawn while her husband was away. Group members lined up to assist her.

“They are some of the nicest, kindest, most helpful people that exist in Facebook groups,” Calandra says.

Another woman got the wrong coffee order at a coffee shop and asked around as to who needed some caffeine at that very moment.

“It’s a true gift economy, giving and receiving without the exchange of money,” Collins says.