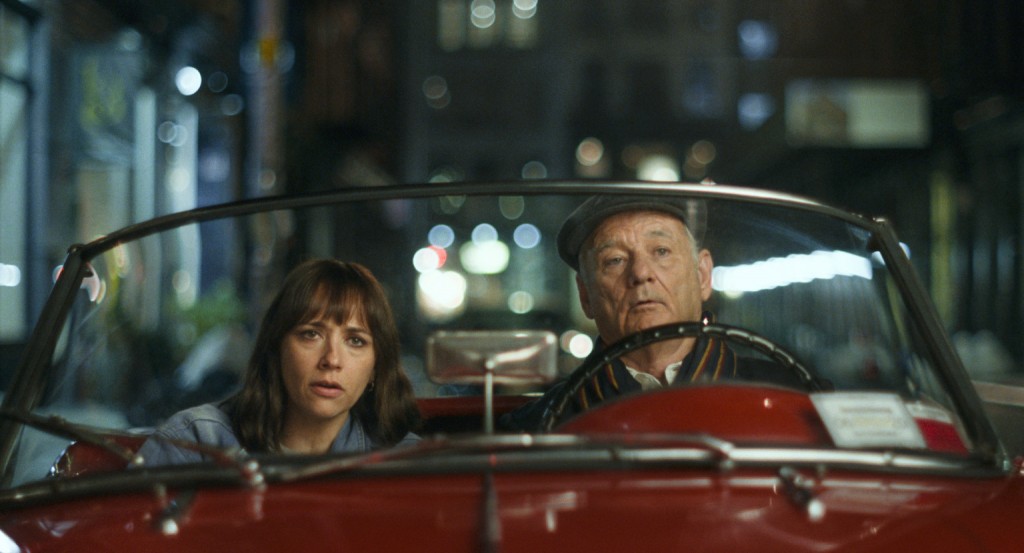 Over the years, director Sofia Coppola has cultivated an unmistakable style that has steadily persisted throughout her entire oeuvre. She tends to focus on young (typically white and blonde) women, who grapple with loneliness and disillusionment amidst the haze of fanciful backdrops—from Lost in Translation’s Park Hyatt Tokyo to Marie Antoinette’s Palace of Versailles.

The first moments of her latest film, On the Rocks, feel like typical Coppola fare. Two newlyweds sneak out of their own dusky reception, giggling as they jump into a nearby pool while still dressed in their wedding attire. Then, just like that, we cut away from their dreamy revelry to the present day, where the woman is instead faced with picking up an apartment littered with toys.

This is Laura (Rashida Jones), a Manhattan author who has quietly fallen into a bit of a rut. The demands of parenting two young daughters have swept her into a harried routine of halfhearted school drop-off gossip and toddler classes, while her suave husband Dean (Marlon Wayans) is frequently away promoting his nondescript startup.

It’s a shockingly low-key setting for a Coppola film, even if Laura lives on a swanky Soho block where poor people don’t exist and you can conjure a babysitter out of thin air to enjoy a quiet piano bar on a whim. The director’s casual inclusion of a Black protagonist and other Black characters is also a particularly welcome change of pace, given the overwhelming whiteness of her previous work. Laura herself certainly makes for a more mature Coppola heroine, this time reeling from her mundane life and plateaued marriage.

After discovering a woman’s toiletry bag in his carry-on, Laura slowly becomes suspicious that her husband is having an affair. One call is enough to summon her father Felix (Bill Murray), a debonair confirmed bachelor whose career as an international art dealer allows him to engage in his fair share of shenanigans. While he himself is unacquainted with long-term commitment, Felix is more than happy to cajole his daughter into investigating, Dean, and regale her with his views on men and women over martinis.

Murray has said that his role as a world-weary photographer in Lost in Translation is his favorite of his career, and at times it almost feels like Coppola wrote the film as a showcase of his enduring puckish charm.

“It must be nice to be you,” Laura scoffs after Felix talks his way out of a speeding ticket in one of On the Rock’s more memorable scenes. “Wouldn’t have it any other way,” he agrees, as they cruise around the city in his vintage convertible.

Even if it’s marriage woes that drive the movie’s thin plot, it’s the father-duo’s fraught team-up that gives it any real emotional weight. For all his blasé musings about monogamy, Felix is a genuinely affectionate dad who relishes the opportunity to spend time with his daughter—one of the only women who has stuck by him long-term, even if his antiquated views often clash with those of his modern daughter. And Laura still clearly wants his advice, even as she harbors resentment for the impact that his affairs had on her childhood.

Jones and Murray, who previously worked together in 2015’s A Bill Murray Christmas, have lived-in chemistry that carries the film, whose scant 95-minute runtime would have benefited greatly from another 20 or 30 minutes. Coppola touches on several common midlife quandaries: why men seem to struggle more with monogamy, the pressures on a modern woman to “have it all,” and how to rekindle a marriage, to name just a few.

But by the time that On the Rocks arrives at its too-neat conclusion, they seem more like throwaway musings from the director than fully fleshed out parts of the story. Alongside the more iconic entries in Coppola’s filmography, this fizzing champagne glass of a film isn’t likely to leave the same lasting impression. But if you’re looking for a gentle screwball to cozy in with for a night, you could do with much worse company.