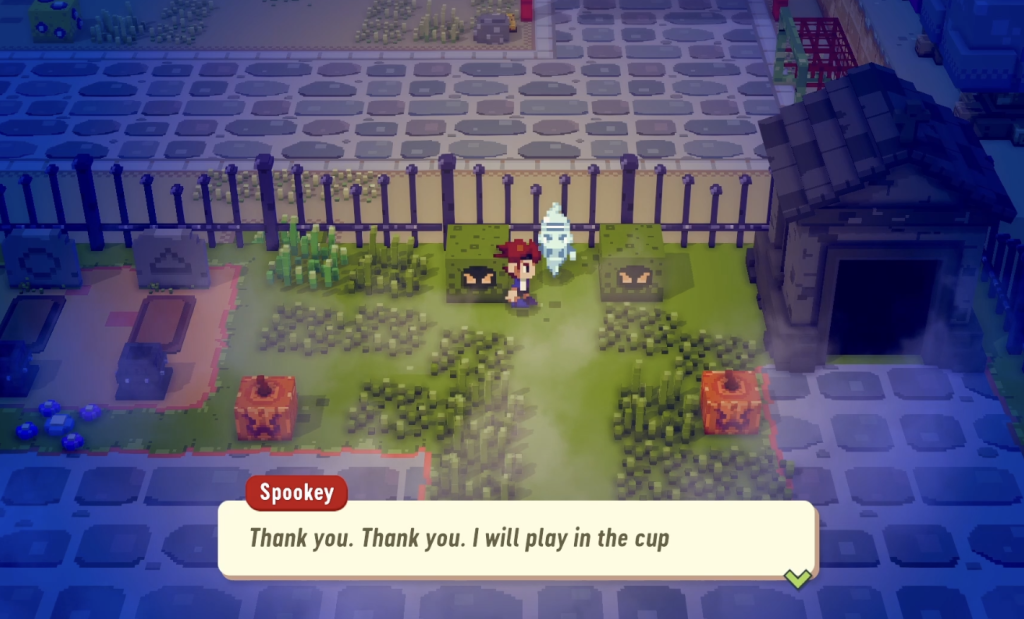 Whimsy is oft in short supply these days. One of the places I turn with some regularity is the burgeoning field of cozy indie games, where cute low-pressure adventures with relaxing music can give me brief periods of respite from the woes of the modern world. The other place I turn is the well-meaning hijinks positive of Ted Lasso. It is just my luck that, in a period of overcoming multiple sources of holiday hyper-stressers, Soccer Story came along to combine the two. [Also released opposite, I dunno, certainly World events. If that’s your Cup of tea.]

Soccer Story is a story set in a world built on soccer, or more accurately, destroyed by soccer. The physics-based sports game finds you as a kid in a world where a cataclysmic event has resulted in the game of soccer being banned, for fear of reigniting an apocalyptic event. An evil corporate overlord has moved in to keep the population distracted from a world in peril, while also enforcing the prohibition of the kicky pastime. Undeterred by a civilization living in fear, you and a magic ball set out fix all the wrongs in the world, one dribble-slide-dodge at a time.

Packed with delightful characters and an array of wackiness that never wears out its welcome, the beautiful little pixel world of Soccer Story invites you to spend much more time engaging with feats of strength, puzzle solving, and civic improvement in your hometown and the communities around you, than it does on actual soccer games. You’ll constantly be using a ball to deal with all the things thrown at you, but what’s thrown at you is constantly shifting. That’s great, because this indie title has 15+ hours of content for you to dive into, and it never feels like it’s dragging. This gorgeous retro game-inspired world isn’t just easy to look at; it’s also a living set of hidden objectives. Once you’ve unlocked the “missions” of each area, it becomes clear that pixel by pixel, this space is designed to layer secrets and prizes into every nook, cranny, and geometric design. Any set of parallel structures might be an invisible goalpost just waiting for your imagination to unlock the potential and summoning an army of skill-testing drones is easier than assembling a team of ice cream-selling sharks.

There’s a lot going on here—in every kind of tone, from mystical evil sky cities down to mini-golf back up to dead dads. Again, it’s a lot.

While the main goal is to save the world, as it is with any video game worth its salt, the method for doing so involves reuniting disbanded FCs across the world, challenging them in cup matches, and eventually using soccer to topple fascist oppressors. It seems easy from the outset, or, from before the outset. My first match was set against a team comprised entirely of toddlers. Thinking this would be a nice tutorial game, I didn’t brace myself for being utterly obliterated by a squad of scamps. Repeatedly. Unmercilously. Trounced to the point where I was convinced that it was an in-game gag, requiring some narrative trick to move forward. There was not. I was, quite simply, less talented than babies. That’s a humbling place to begin any videogame, especially one based in competitive sports.

Soccer matches in the soccer game, it turns out, can be punishingly brutal at higher difficulties, which is a distanced stone’s throw away from the rest of the space’s many, many cute RPG-like activities. There didn’t seem to be a lot of rhyme or reason to why my goalie suddenly evaporated into thin air while scoring on my opponents necessitated a combination of hijinks and luck. It’s odd to note that straightforward soccer matches themselves feel like the least fun part of Soccer Story, but that makes more sense when one is a traditional sport and the rest of this package is essentially high energy mini-games from the mundane to the fantastical. With a quick tweak to match difficulty, this post-apocalyptic soccer fantasy throwback is well worth your time.