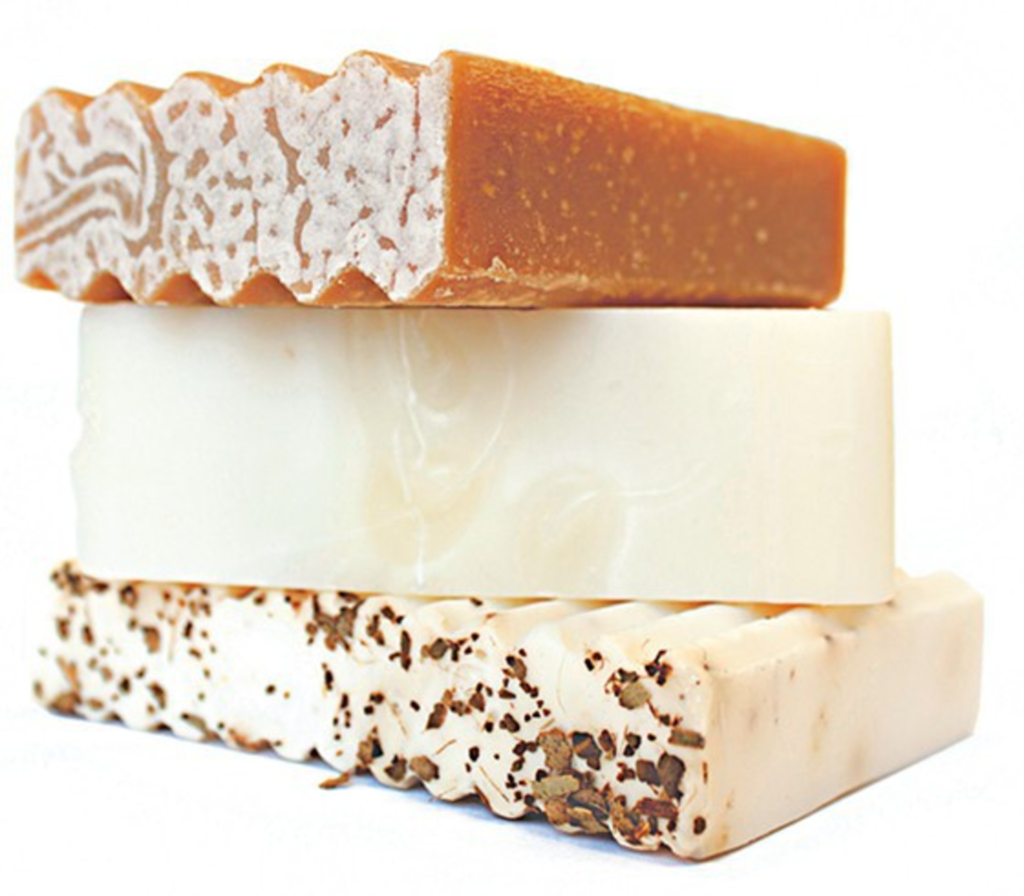 Simmons bought Soapologies in early 2011 from a woman in Holton, Kansas. She had long been a fan of the soap – sold at Stuff in Brookside – and spent the first 18 months of the venture learning the trade. Over the past year, she has broadened the line with the addition of lotion, shea-butter creams, scrubs, and multiple soap sizes and scents.

She was initially attracted to the glycerin soap for its moisture retention, and she has found that the humectant quality keeps customers coming back for more. People with skin sensitivities swear by the top seller: soap with oatmeal, milk and honey. The eucalyptus-mint bar, with what Simmons describes as “that fresh scent that everyone loves,” claims the No. 2 spot.

Leslie McGuire describes Indigo Wild’s honey-lavender Zum bar in a way that makes you want to devour it.

“It’s this brown bar that’s really warm and yummy in the shower and leaves your skin feeling so good,” says McGuire, who manages marketing for Kansas City’s best-known soap house. “It is like heaven.”

The bar makes its Indigo Wild catalog debut this week. The Zum bar is the nationally known company’s signature product, but at least two years have passed since a new scent joined the family of goat’s milk soaps.

Beyond the bar, Indigo Wild products rolling out now include a sea buckthorn facial serum; the Zum Ball Haul – Zum soap in a three-balls-per-package form; and a tea-tree spray cleaner for yoga mats. As McGuire says, “Yoga mats can get funky after a while, so this gets out that funk, yet isn’t overpowering to where it disturbs the person next to you in class.”

Gabby Mendez and her boyfriend, Chad Kepler, responded to a need last fall.

“We couldn’t find soap without a lot of crap in it that wasn’t terribly expensive,” she says of the idea behind the couple’s Basement Soap.

They both have a passion for making things, so the challenge seemed doable. She repurposes clothing and jewelry and draws. He’s into food fermentation and perfecting apple cider. (To pay the bills, Mendez works as a massage therapist, and Kepler drives a truck.)

They’ve stuck to just three ingredients – coconut oil, olive oil and essential oils – to make soap in the basement of their Kansas City, Kansas, rental. Their line so far has included a lemon, orange and grapefruit citrus blend; a lavender scent; and an orange patchouli. They’ve sold their soaps temporarily in salons and a coffee shop. Mostly, Mendez delivers the product to those who find her through word of mouth.

They’re searching for ways to grow their soap business as well as their other projects. “We’re makers at heart, and every day we’re looking for ways to get a space or buy a house so we can make more stuff,” Mendez says.