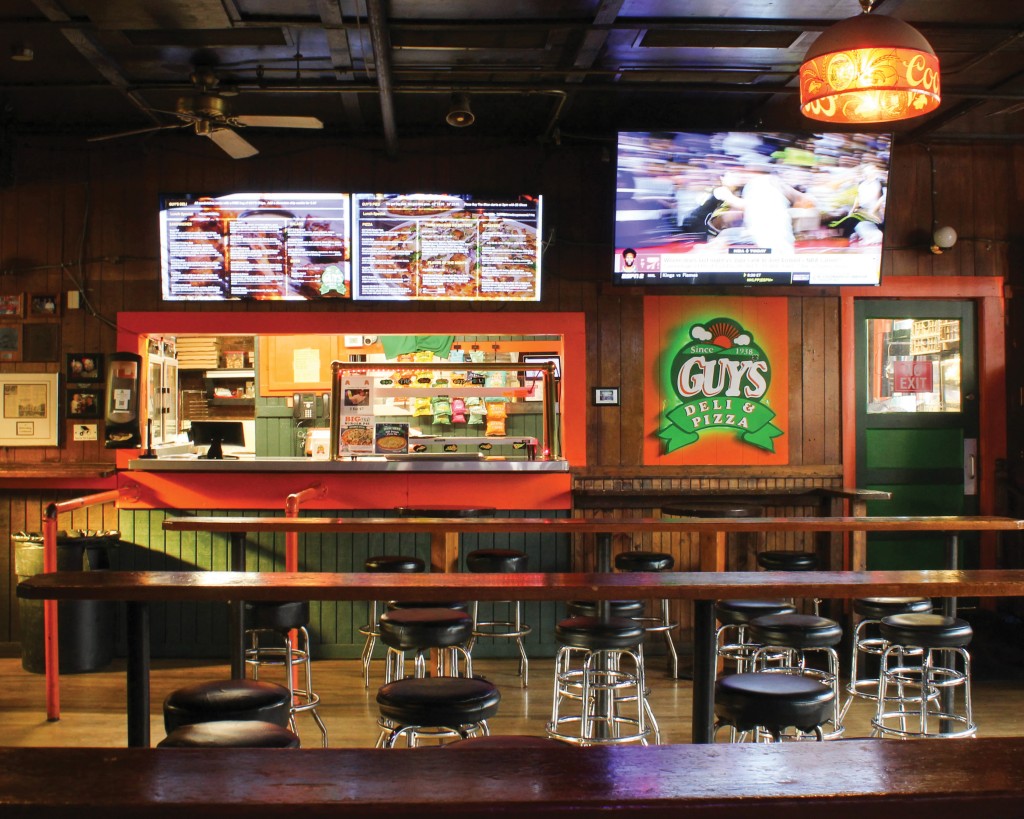 Envision a brown paper bag full of peanuts. The oily blotches allude to the satiating, slightly sweet legumes coated in salt granules, and your brain might already be flooding with dopamine. And now envision a man named Guy—yes, Guy—delivering these brown paper bags full of peanuts to corner grocery stores throughout KC.

Does your heart flutter? Do your pupils dilate? If your mind wanders to Epipens or inflammation, you’re missing the point.

The origin of Guy’s Snacks is as Midwestern as it gets. Following his service in WWII, Guy Caldwell returned to Kansas City and purchased a home-sized peanut roaster. By 1948, Caldwell was distributing peanuts and potato chips throughout his neighborhood.

Within 10 years, Guy’s product line expanded to include pretzels, pickles, and smoked herring. Caldwell’s wife, Frances, packaged the peanuts and potato chips in brown bags, an image reminiscent of simpler pleasures and an illusion of simpler times. Guy’s packaging has taken on a more vibrant look since then, although their logo—a sunrise emerging between rolling hills—conveys a sensibility that underpins Guy’s salty snacks.

Guy’s wholesome, playful spirit is a product of rebirth as the company endured…let’s call them “darker times.”

Once Caldwell retired in 1979, the company was sold to Borden Dairy, who thought their DSD network would be a good fit for chips. It wasn’t, and the brand was bankrupt under another private equity brand by 2007. In 2008, Jack Joslin acquired ownership. He passed away in 2011, and his wife, Janine Joslin, took over the company. Despite her admired efforts to return the brand to its original glory, her passion was elsewhere.

It was around that time that Andrew Miller, the current President of Guy’s Snacks, decided to cold-call the company: “I’m Andy, and I bet I can sell your chips better than the guy doing it right now.”

And so he did. By 2014, Miller had taken over their DSD, brokerage, and eventually total ownership. “I get bored easily,” Miller says of his dedication to the cause.

His portfolio reflects this confession. Miller ran his first three bars by age 21. In 2007, his father requested that he leave his current position in Fayetteville, Arkansas, to help with his family’s company, Spanish Gardens Food, of which he is currently the COO. In 2021, Miller launched what he deems an extension of Spanish Gardens Foods: Una Familia Tequila, KC’s first local tequila brand. 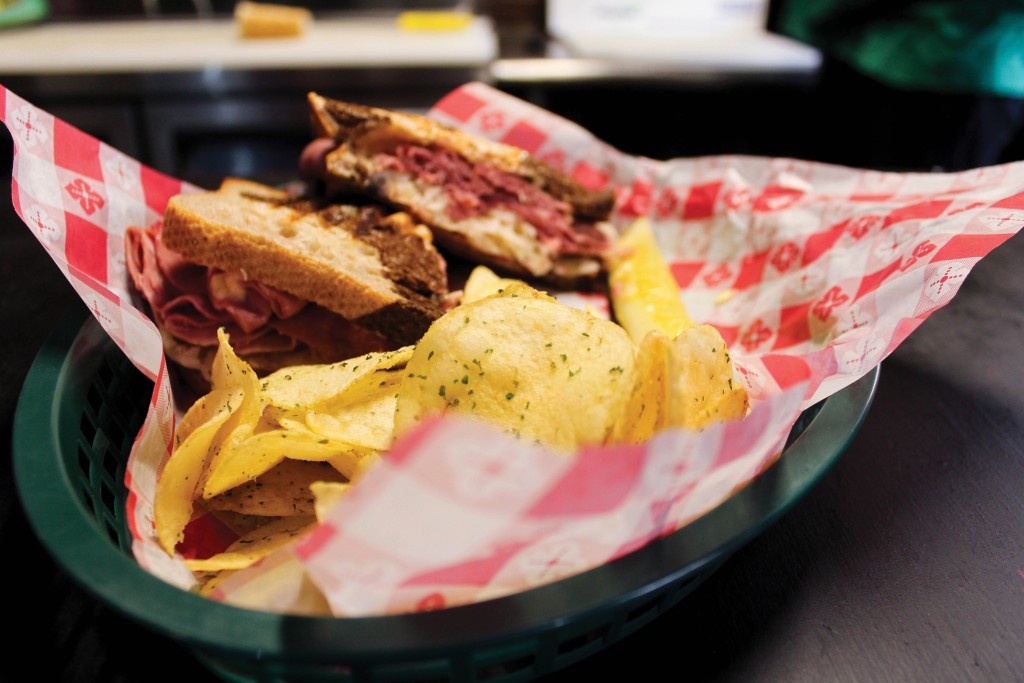 Guy’s offers sandwiches and snacks at their brick-and-mortar deli. // Photo by Grace Wilmot

It’s thematically consistent, then, that when Joe Addington of Joe’s Pizza discussed retirement in 2021, Miller immediately launched Guy’s Deli. Despite the massive undertaking of developing and growing Una Familia Tequila throughout the Midwest that same year, the deli’s shared walls with the historic Kelly’s Westport Inn posed an undeniable opportunity for brand equity.

Perhaps this explains Guy’s preservation of Joe’s tried and true pizza-by-the-slice with a few minor tweaks to the recipe and a few additions to their lineup. Guy’s features monthly pizza specials: last month’s flavor was crab rangoon, and next month’s is Big Mac. Three months ago, they released the Dill Dough pizza, which has been so readily embraced that they’ve integrated it into their permanent menu. The Dill Dough pizza—whose name emerged via a Twitter poll—highlights a dill-infused dough, dill ranch, pickles, and banana peppers.

Miller’s true concern is Guy’s sandwich repertoire—it’s a sandwich, after all, not a pizza, that is traditionally paired with chips. Constructed between two slices of Farm to Market bread, Guy’s offerings include Italian cold cuts, and hot pastrami, among others. Not to mention a peanut butter, grape jelly, and “barbeque” chip blast from the past.

Miller anticipates a second deli space in Lee’s Summit, as well as a bodega in the Crossroads, which is scheduled to open this winter.

“We want to engage with the neighborhood and see what they want,” says Miller.

Guy’s Broadway Bodega will feature a full-service bar where you can grab breakfast, lunch, and dinner. They’ll also feature fresh produce, bouquets by a local florist, and nightly specials that highlight restaurants throughout the city. 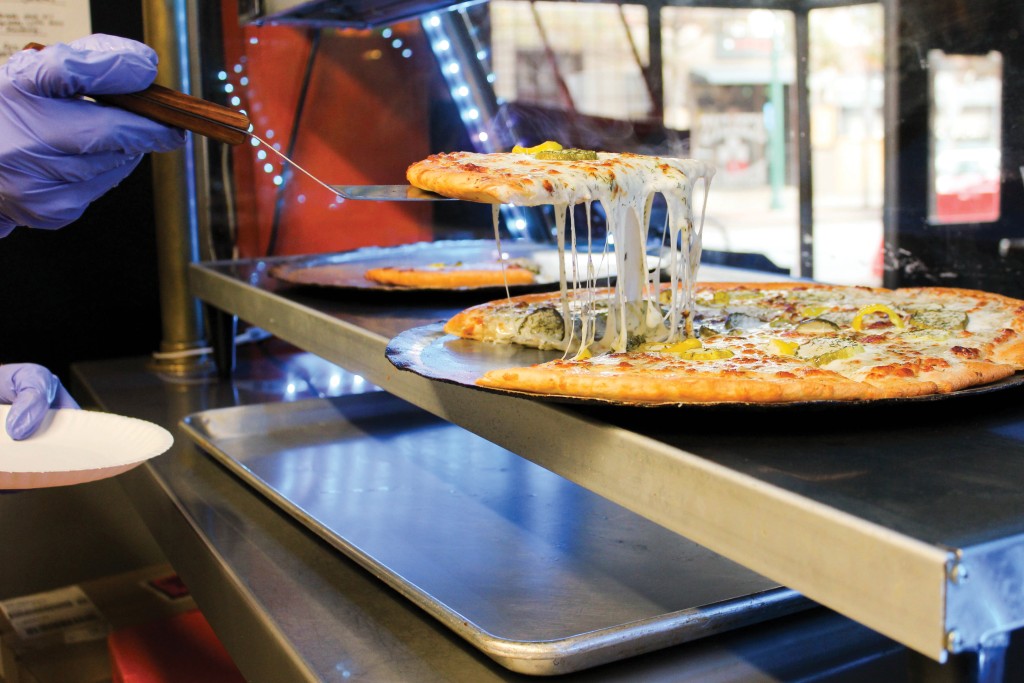 Despite recent brick-and-mortar developments, salty snacks remain the focal point of Guy’s Snacks Corporation. Guy’s claimed rights to the first “barbeque” potato chip, and the company has tentative plans for a variation of their barbeque flavor in collaboration with Arthur Bryant’s. Other future flavor collabs include a sweet Maui onion potato chip with Longboards and a wasabi potato chip with Gojo’s.

“People remember having Tasty Mix in their sack lunches, including myself,” says Miller. “But we don’t want the brand to die on nostalgia… and that’s where our Twitter account feels relevant.”

“My dad grew up eating Guy’s barbeque potato chips, but people within my age bracket—people in their late 20s and 30s—had no familiarity with the brand,” says Jeremy Smith, who was hired to run Guy’s Twitter account last September.

Smith’s appointment was strategic. His background is in stand-up comedy, and he is unafraid of the margins. He suggested that Guy’s Deli try the viral internet pickle pizza, and he heavily advocated for its name. He’s also a sports fan—he’s notorious for posting during Chiefs games, and he’s garnered a lot of attention this way.

Although Guy’s is not yet at a scale to distribute to the Arrowhead Stadium, the company is in partnership with Sporting KC (i.e., Guy’s Nuts) and the KC Pioneers, KC’s esports league.

“Not to be too stereotypical, but the e-gamers might be fans of the THC chip when it launches,” says Miller.

This brings us to Guy’s most recent collaboration with KC-based cannabis start-up: Franklin’s Stash House.

Before you deem yourself a comedic genius for considering the infinite snack loop that is a THC-infused potato chip, know that Miller is already fatigued by the bit. Jokes aside, potato chips are a classic remedy for the munchies. Much like Taco Bell’s audacious appeal to a stoner subculture, Miller has discovered yet another avenue to brand awareness.

“I am a fan of the cannabis industry, and I genuinely believe dispensaries will start having marketplaces, so why not integrate my brand into the space?” asks Miller.

Despite Miller’s seemingly non-stop forward momentum, he did pause before adding the THC potato chip to his lineup.

“What would be the impact of taking a brand that people know and love and associating it with something [i.e., cannabis] that still has—wrongfully so—a stigma?” asks Miller.

His questioning pertains to brand equity and Miller’s perception of Guy’s Snacks as something fun and wholesome, much like Caldwell’s first iteration of the company.

“I think Guy [Caldwell] would approve of THC potato chips as a branding opportunity,” says Miller.

Miller strives for inclusivity. He seeks to cater to a clientele who knew Guy Caldwell’s brown paper bags, younger generations who are only discovering the company through Twitter and late nights in Westport, and everyone in between.

Smith’s suggestive Twitter content, the deli’s Dill Dough pizza, and the anticipated THC chips are like the hidden vulgarity in children’s shows. They reach their targeted audience while maintaining enough subtlety (or separation, in this case) to appease the more prudent among us.

“I cannot verify or deny whether Guy partook in marijuana, but I’d like to think that he did to brainstorm potato chip flavors,” says Miller.

Maybe he did, maybe he didn’t. Maybe that’s the key to Miller’s creativity. Nonetheless, Guy’s remains true to its origins: a straightforward snack company with a little something extra for everyone.