Skrillex welcomed an enthusiastic crowd to his mothership on Saturday night 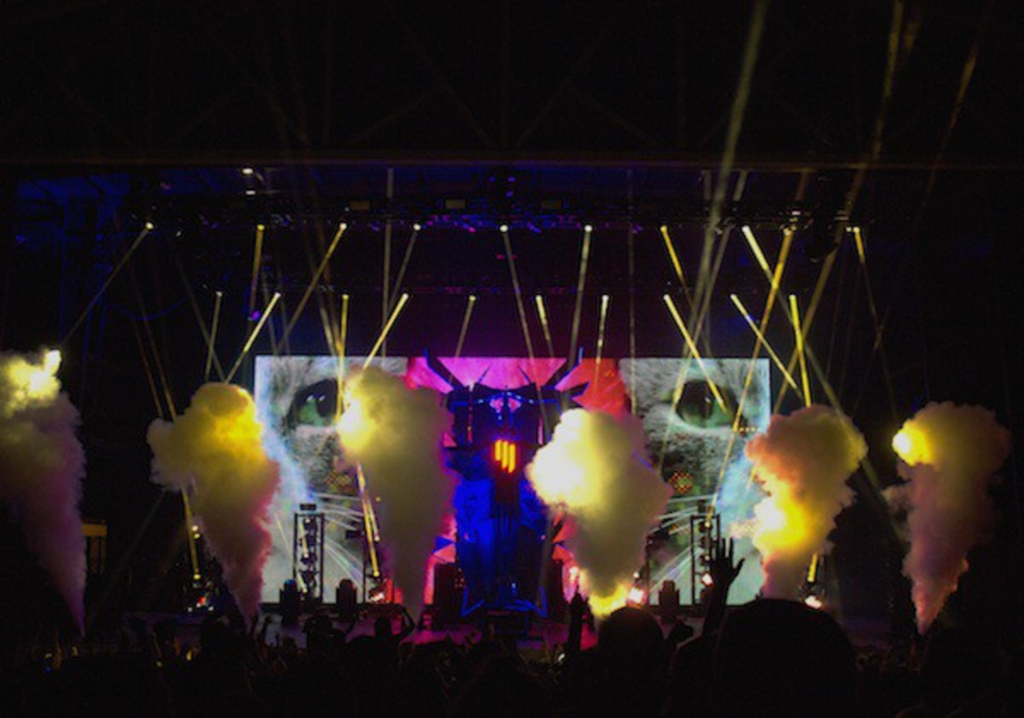 Last night, the Skrillex Mothership tour landed in Bonner Springs, Kansas. Since Skrillex’s meteoric rise to the top of the EDM scene, he has brought new music and some of the most talented DJs along with him on his tours. His ability to push EDM’s boundaries has brought in a youthful, hungry crowd. The concertgoers gathered outside of the gates of the Cricket Wireless Amphitheater were young, colorful and ready to dance to the pumping music.

Skrillex’s live set, like his new album Recess, was a reggae infused experience. To emphasize the point, he played original Bob Marley tunes before and after his set.

But not every song was reggae, and not every song was dubstep. He often bounced back and forth between high energy, fast-paced songs, some hip-hop, and the whomp of the dubstep beat he is known for. Although he played songs spanning all of his albums, such as “Kill Everyone” and “Make Dem Burn,” he mostly played what everyone had come to hear: the new stuff. Before we could get to that, a giant digital clock started a five-minute countdown. 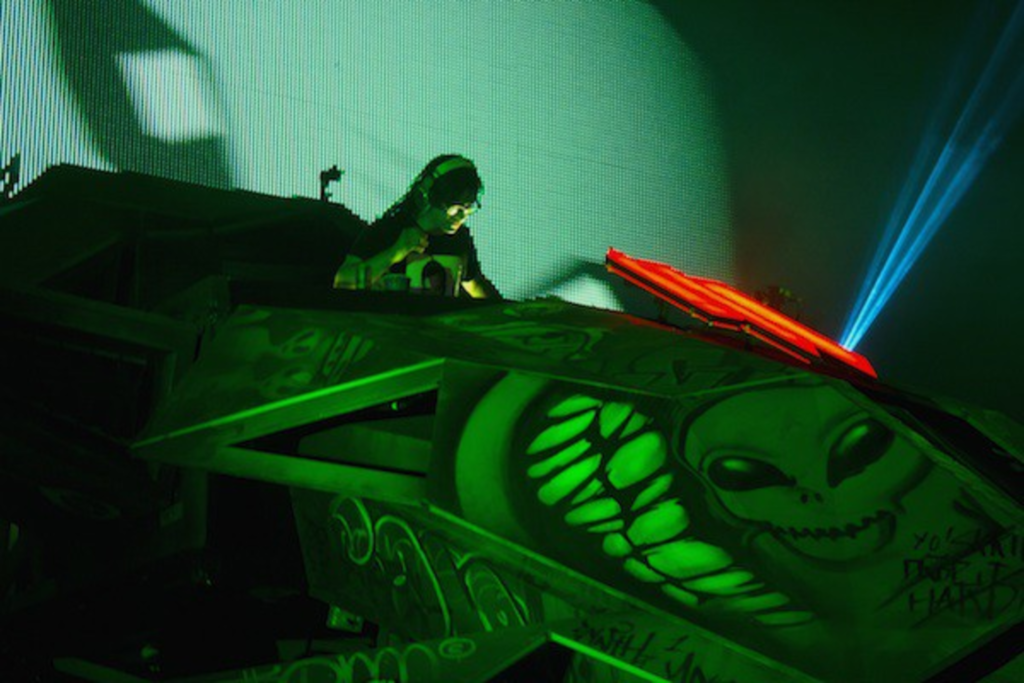 At 10:30 p.m., the curtain between the crowd and Skrillex dropped and the stage exploded with lights. The smaller DJ stage that the openers had used was gone, and before us was Skrillex in what looked like the cockpit of a fighter jet, with the Alien Logo from Recess spray-painted like graffiti on the side. Right as things started to heat up, Skrillex almost killed the music to quell a fight that had broken out near the front of the crowd. He called them a “couple of bad apples” and then appealed to the crowd to take care of each other. Then the music was turned up.

The crowd was an enthusiastic group, covered in neon, fur boots and sunglasses. During the openers, it took a little while for the crowd to warm up, even when Dillon Francis played some recognizable hip hop. However, this was not the case when Skrillex stepped on stage. A scream rose from the crowd, and they were ready for the bass to drop. 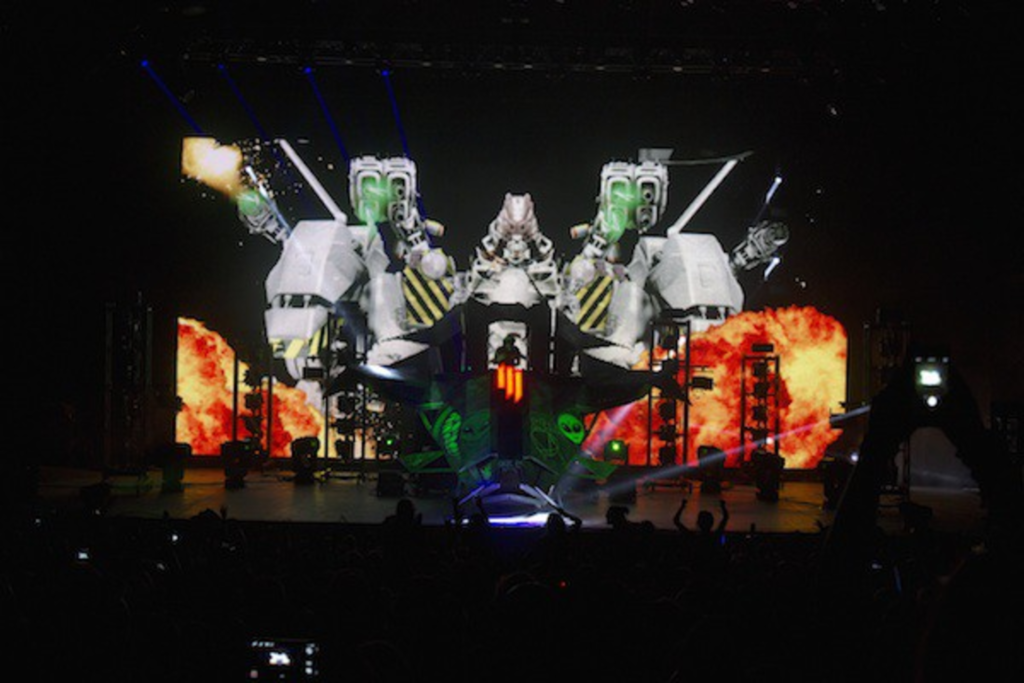 The lighting and visuals are something Skrillex has been working on in his L.A. warehouse for the past few months. His crew had barely got all of the pieces and lighting together for their debut of this tour at Coachella, but they were ready for KC. The screen behind him showed some of the video footage that included Michael Jackson, monkeys from Disney’s The Lion King (shown when he sampled music from the movie), and the Internet meme known as “Pop Tart Cat.” Lights pulsated from every point on the stage, and the spaceship itself was set on hydraulics so that it could be raised or lowered. 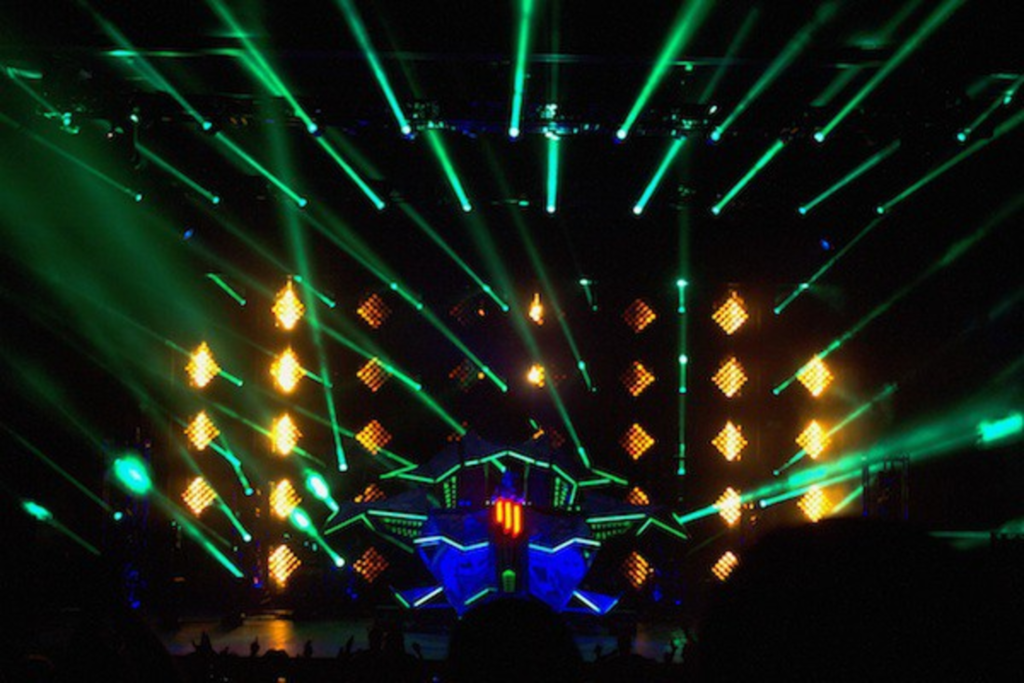 With 20 minutes left before midnight and the show’s conclusion, Skrillex started to build towards the finale. He continued with the reggae vibe and played the lyric Out in the streets they call it murder, sampled from the tune “World-A-Music,” before dropping into a dirty bass remix of the tune. Throughout the night, Skrillex was as into the music as his audience: He never stopped dancing and gave shout outs to specific audience members who caught his eye.

Just as he did earlier when the fight broke out, he stopped the music just before the last song. This time for some audience participation, asking the crowd to get low to the ground – and except for a few unruly people and someone dressed like Spider-Man – everyone complied. He waited until everyone was down before he started the last build. It was the final push. 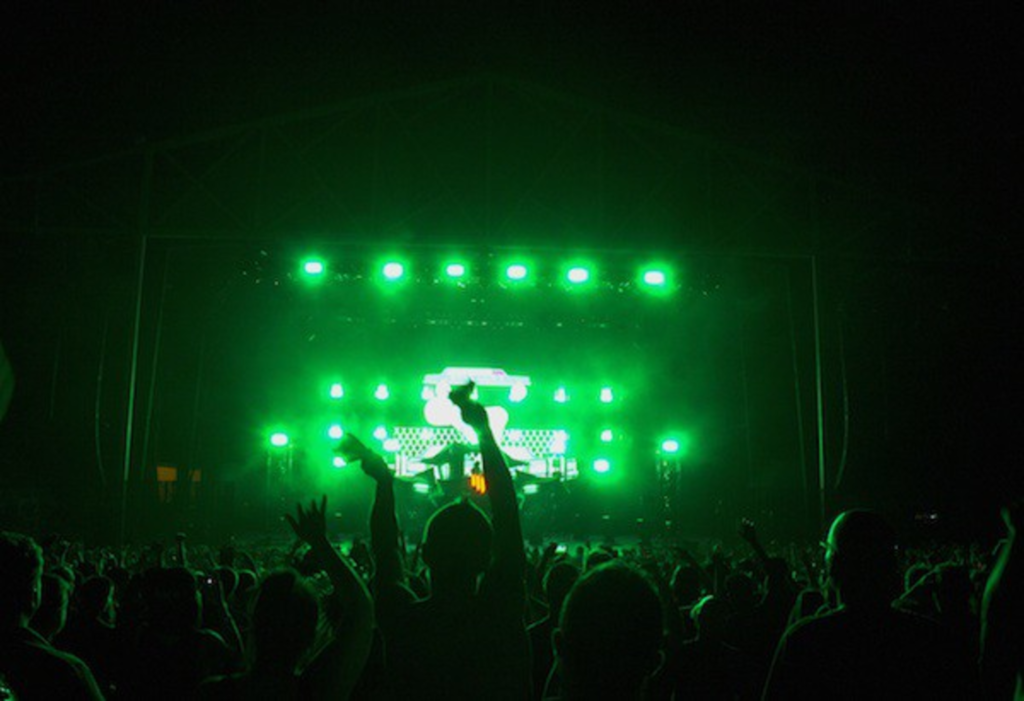 When the song finished, Skrillex jumped off his fighter jet and down between the stage and the fence to say hello to the fans that were at the front. He only stayed a few moments before the bouncers helped pull him back up, and he was whisked away. With the set over, hundreds of tired and sweaty fans streamed toward the door as Bob Marley’s “One Love” played them out.