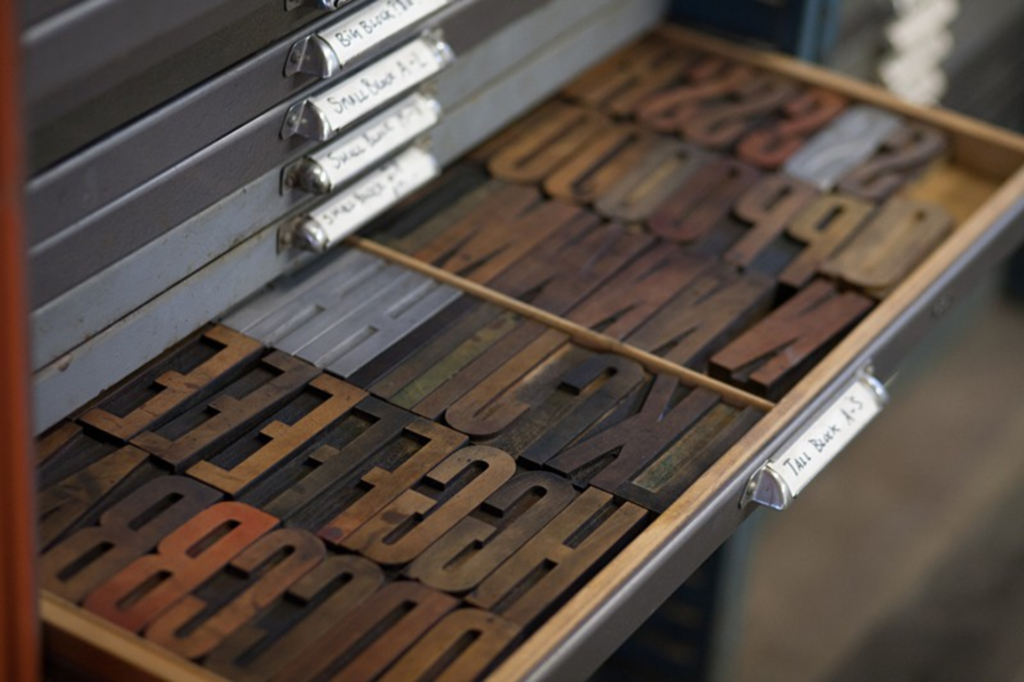 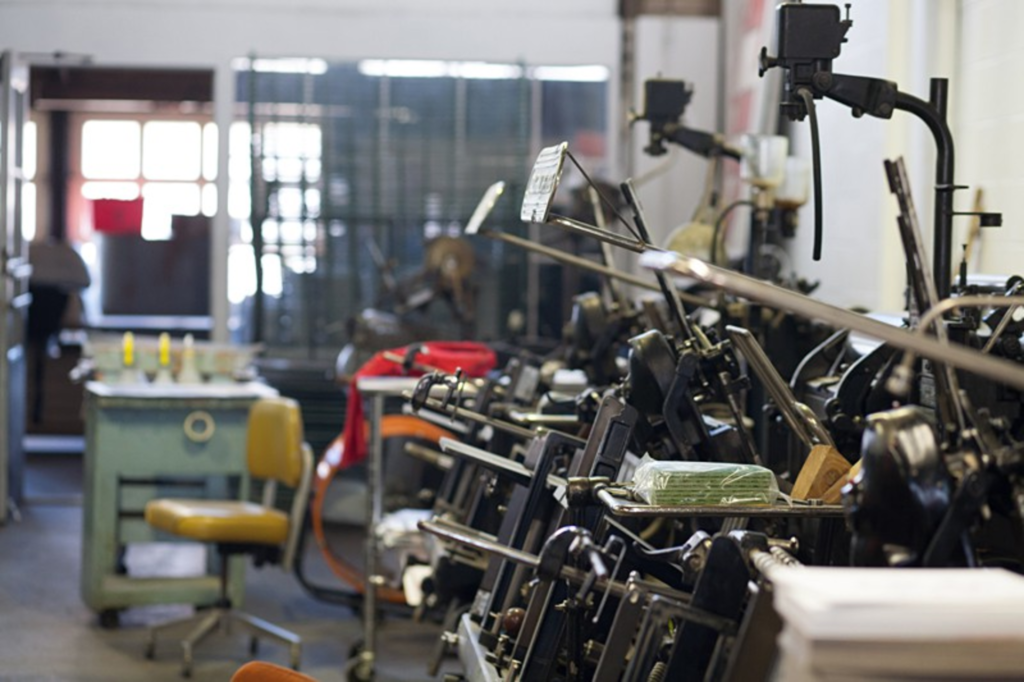 If you were reading these words on newsprint, you’d be looking at a page that had been machine-produced for a large audience — something manufactured, as most everything is, with efficiency and cost-effectiveness in mind.

But not everybody who puts ink to paper operates that way. A vibrant community of commercial printers in Kansas City has purposely adopted labor-intensive methods, sometimes using decades-old equipment that has fallen out of fashion, collateral to printing’s digital revolution.

The entrepreneurial artists, designers and craftspeople spotlighted here have found a profession that they say is a means to self-expression and a way to improve their surroundings. They share a passion for process, and their missions are simple: impeccable craft, outstanding design, high-quality products. Arguably, they’re making something else, too: a KC indie-press boom.

It would be hard to overstate Hammerpress’ role in the development of Kansas City’s hive of small, artist-run print shops. Owner Brady Vest got hooked on letterpress as a student in the printmaking department at the Kansas City Art Institute (where his senior thesis was the production of 1,000 CD covers for a local band).

“When I graduated, I had to figure out a way to keep doing it,” Vest says. So he purchased equipment he found advertised in a trade magazine, which he had picked up on campus (this was pre-Internet), and then he set up shop. Nearly 20 years later, Hammerpress is a Crossroads retail staple, shipping its original-design paper goods (stationery, posters, calendars, greeting cards) internationally.

The company’s aesthetic has maintained the look of the original handset type, though plates today are usually produced from digital files rather than assembled by hand. And Vest has come a long way from the pre-Internet world. Hammerpress’ website and social-media presence attract customers from all over the world — customers whose digital routines have perhaps inspired a renewed appreciation for the handmade.

“The Internet and Martha Stewart” revived the letterpress, Vest says. “I’m serious. Ten years ago, she was highlighting letterpress wedding invitations. Ten years ago, you’d have to explain to people what that is.” Thanks to artist-run print shops like Hammerpress, an explanation is no longer necessary.

For now, Michelle Dreher and Angie Dreher-Bayman hold most of their client meetings at the Filling Station, just down the street from the building they’ve been renovating to house Two Tone’s studio, offices and retail space. Purchased from Truman Medical Center two years ago (in a deal partly financed by bartered prints), the building holds the partners’ three vintage Vandercook letterpresses and a Chandler & Price platen press.

Dreher fell in love with the letterpress process as a student at the Kansas City Art Institute. She says, “It takes a certain kind of person to get grease on your fingers and want to work with machinery. I love it.”

Her sister’s zeal, on the other hand, is for lists and spreadsheets. After joining the business in 2011, Dreher-Bayman streamlined the pricing and revamped the business’s Web presence. She also convinced the reluctant Dreher to court more wedding work, a portion of their business that has since blossomed. When they’re not designing or printing for clients, the two produce their own line of fine-art prints and stationery, which they sell at craft and print fairs and on Etsy.

Printosaurus’ husband-and-wife team, Chris and Lauren Foxworth, met as dorm neighbors during their freshman year at the Kansas City Art Institute. After graduating, the couple started taking screen-printing jobs on the side while working at a local business that printed soccer jerseys. Printosaurus began in the couple’s living and work space in 2009, after the Foxworths purchased a dryer, an exposure unit and a six-color manual T-shirt press from a friend of a friend.

The company offers design services and screen-printing on textiles and paper goods, and its clients include Broadway Café and Spin Neapolitan Pizza. Doodling while watching movies together (the two now share another day-job workplace, Tivoli Cinemas) provides inspiration for the T-shirt designs that they sell through their website and on Etsy. They say they want to open a Printosaurus retail space, a goal they’re saving toward. Even without brick-and-mortar overhead, though, the Foxworths keep their prices low to make sure that anyone can afford to own an original design. “Who says art has to be expensive?” Chris Foxworth says. “Might as well have quality images for cheap.”

Community is at the core of La Cucaracha Press, which grew out of the ruins of the Arts Incubator’s Inkubator Press, a membership-based printmaking studio that closed when the city shuttered its parent organization’s doors in June 2011. Nicholas Naughton, who served as Inkubator’s director, along with shop monitors Eric Lindquist and Jordan Carr, purchased some of the defunct press’s equipment to start a new shop. Operating from a space in the City Ice Arts Building, La Cucaracha offers design services along with letterpress and screen-printing, but the shop also retains a membership-based system similar to Inkubator’s, with a small roster of regular members paying rent to use the space and its equipment.

The press generates work through word of mouth; its jobs have included labels for Broadway Café’s bottles of 20th-anniversary roast, tags and look books for Method boutique’s Negro Leagues Baseball Museum clothing line, and fine-art prints for Peruvian Connection stores. Most of La Cucaracha’s original designs center on repurposed vintage images, with a handmade aesthetic that takes advantage of printmaking’s inherent irregularities. Further cementing its community-centered status, La Cucaracha has served as a home base for the Phresh Prints Co-op, made up of Kansas City Art Institute students who volunteer their design and printing services to local nonprofits.

In order to reach the printing equipment at Union Press, you have to walk by what Zach Lovely describes as the “workout facility”: a graffiti-covered ramp that’s positioned just right for skateboarding breaks. But you expect that here — Lovely is the man behind Lovely Skateboards. He started Union Press as a way to cut a middleman out of the clothing line he designs, and he had a key ally: Brian Scott, the production manager who honed his skills making prints for the Chicago Museum of Contemporary Art. The business specializes in small runs of T-shirts (a typical order is just 24–50 pieces), and his local clients now include Mercy Seat Tattoo and Art Gallery, Lady Luck Hair Parlour, and the Blue Nile Café.

Lovely says the shop’s attention to detail sets it apart: “A lot of people just pump the jobs out. We actually care. We’re not going to let you print your logo on your belly like a Care Bear. We’ll move it up to where it’s supposed to be.” He hopes to open a satellite location for the print shop in Denver, but there’s no plan to return to a retail-store model in KC. Trunk shows and online shops are the only places to find his Lovely line and Scott’s Nug Life label.

You don’t have to spend much time in the pressroom at Skylab Letterpress to realize that owner Bob Atkins and press operator Ben Jones are geeks — about printing and about science fiction. Atkins learned the letterpress craft while working at Rohner Letterpress, a shop in Chicago, and he opened Skylab in 2006 after attending the Kauffman Foundation’s FastTrac program. The business’s name (which refers to the NASA space station that orbited the Earth from 1973 to 1979) reflects Atkins’ interest in all things out-of-this-world. Skylab prints large-volume letterpress jobs exclusively designed by outside clients, which have included Lululemon Athletica and the School of Visual Arts in New York City.

Skylab is home to three Heidelberg windmill presses and one cylinder press, which allows the shop to comfortably produce 2,500 one-color impressions an hour — way more than a smaller, hand-fed Vandercook press — without sacrificing the three-dimensional quality that’s achievable only through letterpress. “They say that out of cheap, fast or perfect, you can get two of the three,” Atkins says. “We don’t offer cheap or fast here.”

Tad Carpenter and Dan Padavic have been friends since they were 15 and played football for rival high schools. These days, they’re business partners. The two began running screen-printing jobs at night, after putting in hours at their day jobs. Their big break came when they landed Myspace Secret Shows as a client. Over three years, they produced posters for 164 Myspace-produced concerts.

When not busy designing for Vahalla Studios, Carpenter maintains his own busy freelance practice, while Padavic’s entrepreneurial spirit has led him to start a fulfillment company. The networks that Padavic and Carpenter have developed in these careers provide a steady stream of business. The partners concentrate on fine-art screen- and letterpress prints for artists and designers, with an emphasis on the music industry. “Everything coming through here is going to be cherished by someone at some point,” Carpenter says. “It’s creating a memory for someone.” Eventually, he adds, Vahalla could expand into designing music festivals and making music videos or animation.

As this story was going to press, The Pitch learned that Bandwagon founder Ryan Beye had died. Beye, pictured above, died in his sleep December 28, according to his girlfriend, Abby Dimalanta. He was 31.

In less than 10 years, Beye, a fixture in the local music scene, had gone from making buttons alone in a garage to running a company that employed 11 people, printed 250,000 shirts a year, and was admired by its local peers. Bandwagon Merchandise, which originally focused on music-industry clients, grew so quickly that Beye had to decide between college and running his company.

He chose the latter, and it proved a savvy move. He told The Pitch in December that Bandwagon’s original four-color press had given way to an eight-color automatic press and two manual six-color presses. The company was focusing on large-scale projects, with a client list including Urban Outfitters and Hot Topic (along with Waldo Habitat for Humanity ReStore and Boulevard Brewing Co.).

Dimalanta says Bandwagon’s staff and Beye’s family are committed to ensuring that Bandwagon Merchandise will continue.