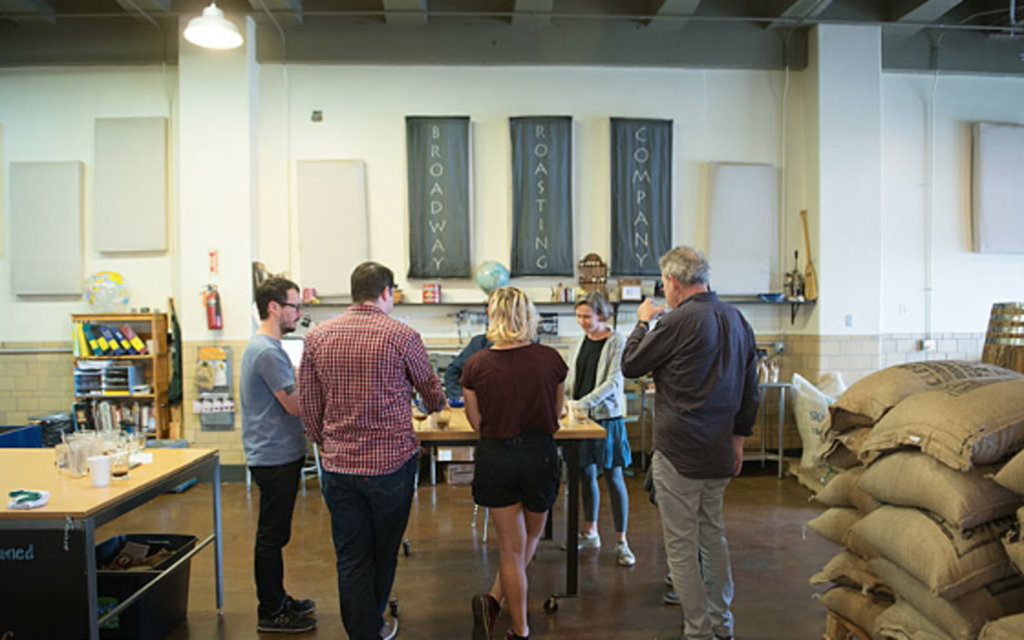 As the clock ticks toward noon, barista Emily Norton tamps down the last of four espresso shots she has pulled for a flight of mochas. Norton, alongside Broadway Café and Roasting Co. co-owner Jon Cates, is about to lead a free tasting class on iced mochas.

Since January, Broadway has held these Wednesday tasting adventures at its roasting facility and café at 4012 Washington.

“If you know a little bit about coffee, then you can know a lot more than the average person,” says Norton, who suggested the tasting idea during her job interview last September. “And you can learn a great deal in a really short period of time.” 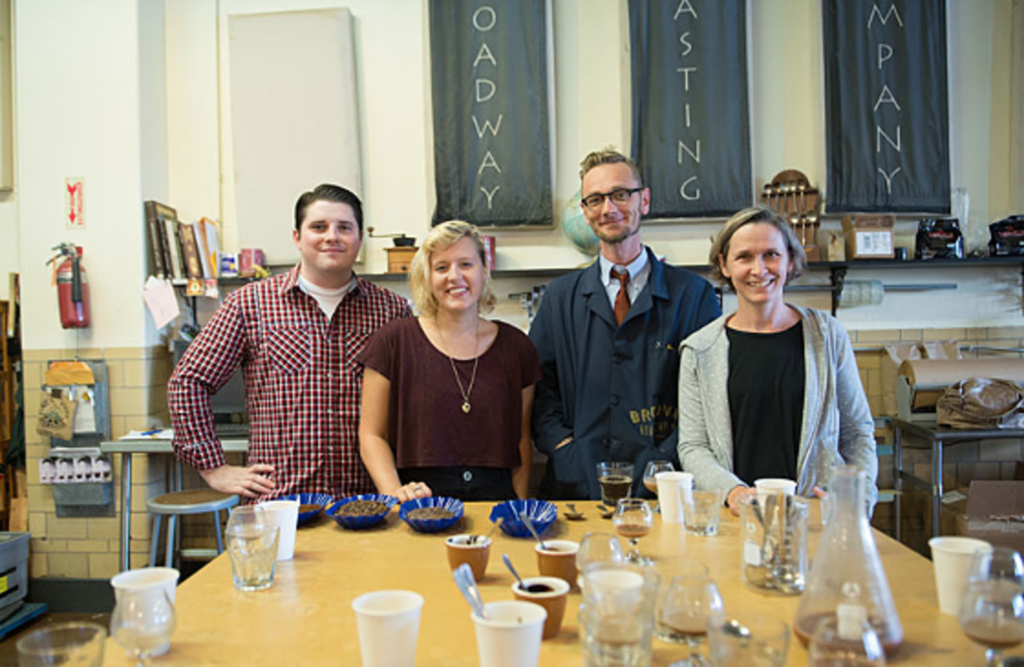 The midweek sessions are often experiments, such as distilling new brew methods or comparing various brands of instant coffee. On Saturdays, Broadway also conducts ticketed courses (with the cost usually $10-$15), many of which have involved pairing Christopher Elbow chocolate with coffee.

“I love hearing other people, who are not necessarily trained, commenting on coffee,” Cates says. For this class, he’s wearing a blue lab coat with his company’s name. “We have one person who comes to a lot of tastings, and she’s into colors, and that’s how she verbalizes what she’s tasting.”

On the first Wednesday in October, things are a muddy brown. Norton has prepared three mochas, two with dark-chocolate syrup and the third with milk chocolate. Each 16-ounce batch contains four shots of the house espresso, 14.5 ounces of milk and a little more than an ounce of chocolate syrup. She carries her glass beakers to the back of the roasting shop, stopping at a raised wooden table between a pair of drum roasters and pallets of 150-pound burlap bags filled with coffee beans.

“Friends don’t let friends drink Starbucks,” reads a green bumper sticker attached to a nearby filing cabinet – a reminder of the neighborhood scuffle that ended with local Broadway surviving and the megacorporation bailing on Westport in 2008. In the wake of that victory, and in need of more space, Cates and his partner, Sarah Honan, opened the second café and roasting plant, on Washington Street, that same year. 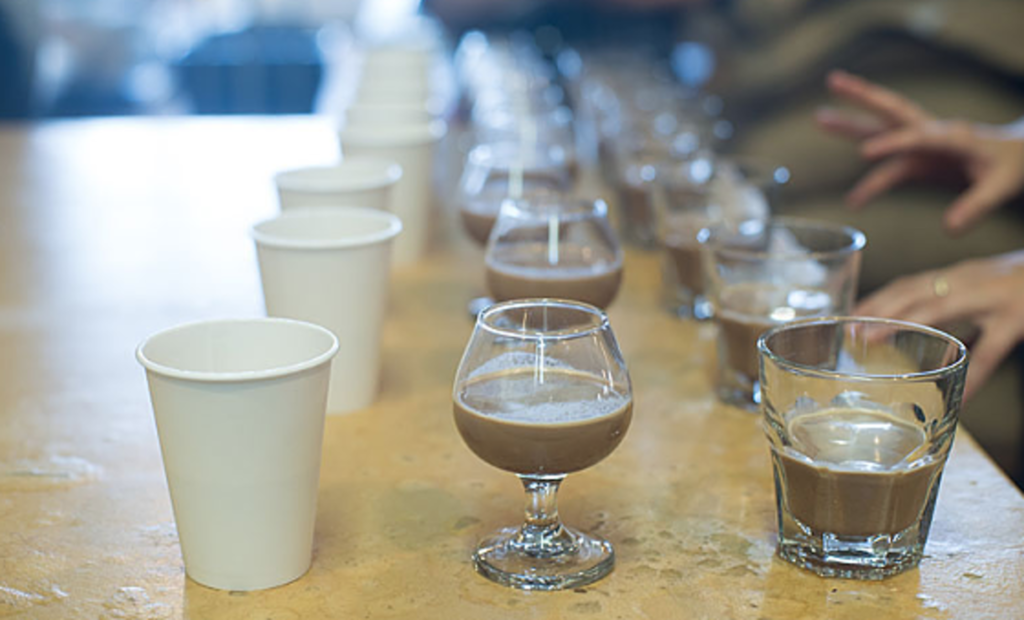 For this blind tasting, Norton pours the batches into three containers: a Gibraltar (slightly bigger than a shot glass), a snifter and a paper cup. The eight people around the table bury their noses in the first glass. Wholesale manager Brian Phillips closes his eyes briefly before taking a sip.

“Brian has gone down the rabbit hole with chocolate,” Cates jokes.

Phillips is in the process of developing a chocolate toddy for next month’s Caffeine Crawl; the Washington Street café is a Saturday stop on the tour, which runs November 1 – 3. Broadway already works with McCoy’s on its milk stout. Phillips wants to create something closer to a Guinness for the toddy drink.

“It takes me back to the mocha from this coffee shop in Seattle. I’m right there,” Phillips says after a sip from the Gilbratar. 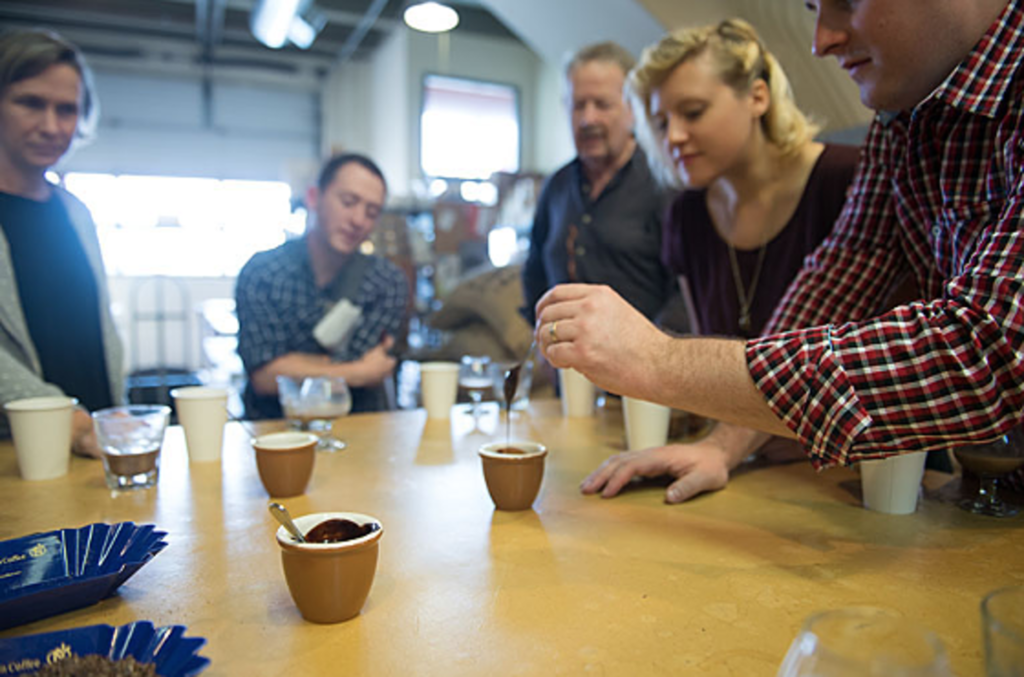 Cates explains that his own typical order when going to a new shop is a shot of espresso, a macchiato, a short latte (often served in a Gibraltar), and a tall mocha to go. Classes here typically involve cupping a pair of single-origin coffees, making today’s mochas a novelty.

In the end, the group of tasters singles out the Gibraltar as its favorite. Norton reveals that it was made with dark-chocolate syrup from California’s Guittard Chocolate Co. The snifter was filled with Ghirardelli dark chocolate. Hershey’s was in the paper cup. Broadway uses Hershey’s in the mochas that are available at the counter.

“I wanted something nostalgic that you couldn’t quite put your finger on,” Phillips says.

“That was really, really nifty,” says Neil Harris, a class regular. (He refers to himself as a “groupie.”)

Norton and Cates have toyed with awarding familiar faces with the designation “Broadway certified coffee expert.” And they keep playing with new concepts for Wednesdays: comparing decaf coffees, assembling fruit pairings (and one unfortunate endeavor involving stale coffee that took on a curry flavor from something on an adjacent stove).

“Coffee is such a personal experience,” Norton says. “Once you figure out what you like, there’s something so amazing about that.”