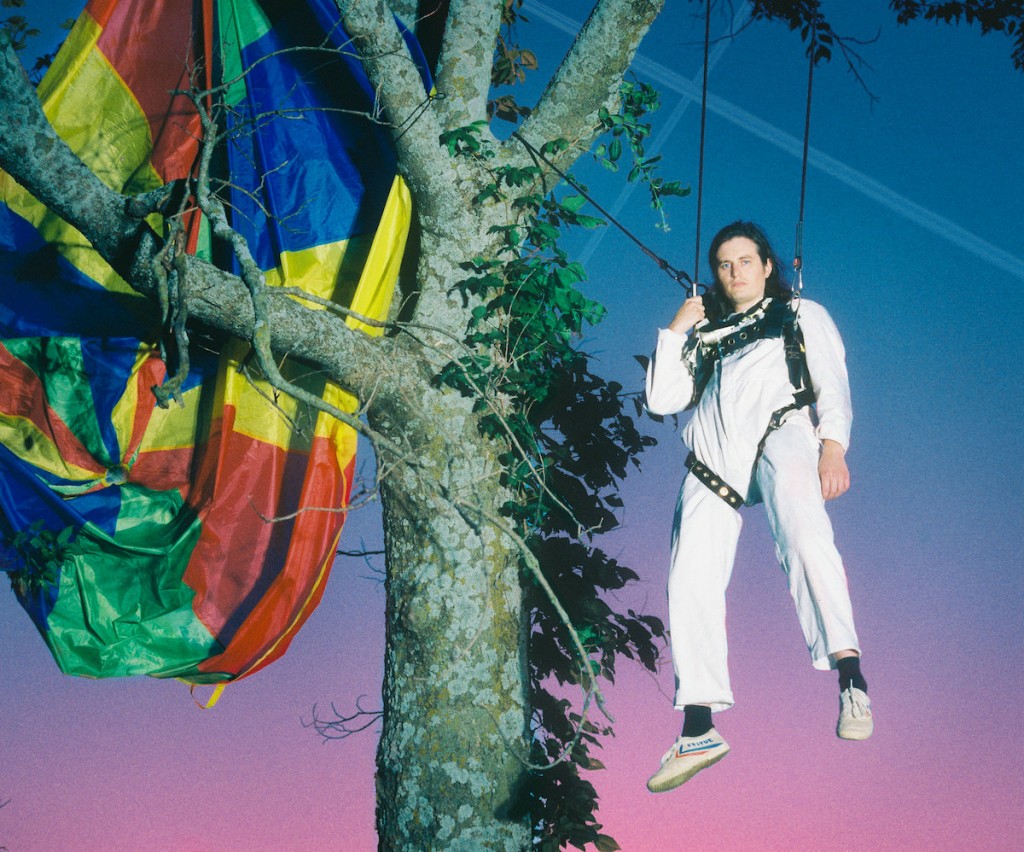 “At the beginning of the year, I was thinking this was gonna be our year as a collective,” Kyle Little remembers. “We’re putting out three records, all the associated bands, hit after hit.” The five members of the Shy Boys, Fullbloods, and Koney crew quickly laugh that one-off.

We’re all masked up and gathered around a patio table in the backyard of one member’s quiet KCK home just after sundown. Like most masked gatherings, it felt pretty bleak, but the Lord knows I do not plan on transmitting or receiving COVID-19 while writing a freelance article about indie rock music (no offense, Pitch editors and band members).

Fullbloods’ — the brainchild of Ross Brown, backed by the Shy Boys crew—new album, Soft and Virtual Touch (out now via High Dive), was the first of the collective’s to fall victim to the pandemic back in April. Rolling with the punches, Brown pivoted from the release show he had scheduled to a fun, radio-style webcast in which he provided commentary after each song, fielded questions from the chat room, and later played unreleased demos and music from friends.

“I almost wanna do that for every release in the future,” Brown told me over the phone back in April. “It was fun to talk about all the little steps since it was an album that was kind of a solitary crafted thing … And nobody could talk over me—it was great!” he says with a laugh. “I’m scared of what that reveals about my personality,” he continued, when I told him that he’d make for a great radio DJ.

Brown and his pals spent over an hour during the broadcast nerding-out about gear and other elements of the record. And there is plenty to nerd out about on Soft and Virtual Touch. Specifics on guitar models, pedals, and percussion—yes, that is a cuica you’re hearing—were doled out and songwriting inspiration was dished. The chat room environment was friendly and goofy and called to mind online communities of the past, before the prevalence of billion dollar social media sites populated by every human you’ve ever met or will meet.

According to Brown, it’s often difficult for him to write new music while sitting down alone with a guitar, making the wide range of instruments he uses important in his creative process. One of the most impressive things about the album is the amount of restraint Brown shows in his playing (despite all the tools in his arsenal and time he has in his studio) while simultaneously creating vast and intriguing pop soundscapes. He credits studio jams with his bandmates for both reining him in and reinforcing strong song compositions. “It helps to have other people bring more spontaneity into the process,” he says. “It’s always fun and it breathes life into an otherwise rather stale and monotonous process.”

Those soundscapes Brown’s crafting, thanks in part to his airy falsetto and his choices in production, evoke visions of a dreamy fantasy world. His girlfriend, illustrator Nika Winn, was tasked with creating the album artwork, inspired partially by the otherworldly works of Italian metaphysical painter Giorgio de Chirico. Pictured on it is a statue of a centaur holding a sheep in the middle of a courtyard, colored with a palette reminiscent of a springtime sunset.

During our call, Brown briefly discussed the centaur’s role as a labyrinth keeper—perhaps alluding to the online world, Brown didn’t go into detail here—and the sheep as a symbol for vulnerability. It’s a theme, along with anxiety, that has popped up several times in the Fullbloods’ songbook. “If Mild West was an album about not being able to breach the social contract or getting caught up in your own head and not being able to cross over into being a normal, sociable person, then this album’s more like coming to terms with that and getting better at it—but still the way that it’s happening is not the way humans used to do it.” The album’s title track and at least three or four others on Soft and Virtual Touch ponder the roles that technology and social media have come to play in how we interact and connect with each other.

“It’s amazing how much better I can be at forming a statement or expressing an idea through writing—or even generally, typing rather than pen or paper—typing is sort of the medium that lets the ideas get out,” Brown says. “I don’t have that sort of correlation as readily available with words, especially in person.” We discuss how his homeschool upbringing, work from home job, and home recording studio relate to this and how, to some extent, he feels that it’s a “chicken or the egg” situation.

Back at our backyard meetup, the group and I banter about Brown’s tendencies of writing “Black Mirror pop” and his meditations on this “sci-fi anxiety.” On the new Shy Boys album, Talk Loud (out now via Polyvinyl), the anxiety is present, but perhaps in forms more earthly.

The album’s lead single, “Trash,” for instance, sees the band grappling with modern consumerism and the immense environmental waste it creates. “Fraid I Might Die” is a bubbling and fairly literal synth-pop number about Collin Rausch’s ongoing unease regarding mortality.

Though an uninformed listener might guess that these songs were written during this COVID summer of ours (one could easily set “Trash” to wildfire footage, or “Might Die” to pandemic newsreels), band members say tracking on Talk Loud wrapped up the day that Kansas City went under lockdown back in March. These woes look to be evergreen, though. Other tracks like “In Gloves,” “View From The Sky,” and “Boiling Water” tackle the grim subject matter of high society snobbery, tech overlord greed, and literal apocalyptic survival respectively.

It’s evident in each element of the album that the band wouldn’t be satisfied with simply rewriting either of their first two albums. Whether in the lyrics, which include some of their most zoomed-out perspectives yet (though still fully human), or in the instrumentation and production, which feature more electronic tinkering than any material to date. The latter is the result of numerous factors.

Aside from aiming to highlight the synth/keyboard prowess of Brown, Little, and Konnor Ervin and wanting to move on from the guitar-heavy nature of the band’s last LP, Bell House, the new sounds explored on Talk Loud stem partially from the amount of time the band spent writing on the road. With some deadlines set by the record company, the crew composed a chunk of the album’s songs using phones and tablets as they traveled the U.S.

Simultaneously, during a portion of the band’s relentless Bell House-era touring, Collin cops to having listened to his first Kraftwerk album, along with regular doses of ‘80s Genesis and Yes records and late-era Roches. When I asked whether they were wary of incorporating too many synths and electronic sounds due to their current trendiness, I was reassured by Little: “Well, if we’re gonna do ‘80s throwback, nobody’s touchstones are the uncool bands, so that’s gonna be our niche.” The group laughs and the inspiration for their endearingly dorky promo photos becomes a little more clear. Little also notes that although there’s a lot more synth on these tracks, there’s almost always an analog counterpart like a piano, organ, or piece of hand percussion to balance things out.

And finally, the band’s access to all sorts of instruments and other toys while recording at Jackpot! Recording Studio in Portland made certain that they could “scratch any itch” creatively.

As excited as the band is to share this weird, sad, and psychedelic indie-pop artifact with the world, much of our chatter that evening led back to the group mourning the loss of many months of touring, where they could sell their merch, make new friends, and watch their songs evolve night by night. These COVID lamentations also covered the inadequacies of livestreaming, the awkward pressures of fundraising through Patreon or Kickstarter, and the financial strain the pandemic is putting on an already treacherous music industry.

Nevertheless, our hometown Boys march onward. October 9 will mark the release of the self-titled debut LP from Koney — Konnor Ervin’s new solo endeavor (of course, backed by the crew). Completed roughly five years ago as an album for his band The ACB’s, these songs sat in limbo while Ervin’s bandmates moved on and he was figuring out just what to do with the tunes. The record is loaded with the smooth and thoughtful pop earworms the crew is known for, and all his bandmates agree on his songwriting gifts. “He’s the true poet and makes the smallest little point in time or incident feel really big or meaningful just because of the time he spends in it,” Brown says of Ervin.

(For those interested in a deeper dive into the Koney LP, I highly recommend Lucas Wetzel’s recent piece in this very rag.)

It’s particularly difficult to find any sort of silver lining or cute little bow to put on a story in a year as tumultuous as 2020; a year where our country’s levels of chaos and pain seem to ramp up exponentially. But if things are somehow going to get even weirder and shittier than they are at this very moment, at least we’ll have these three albums to keep us company.