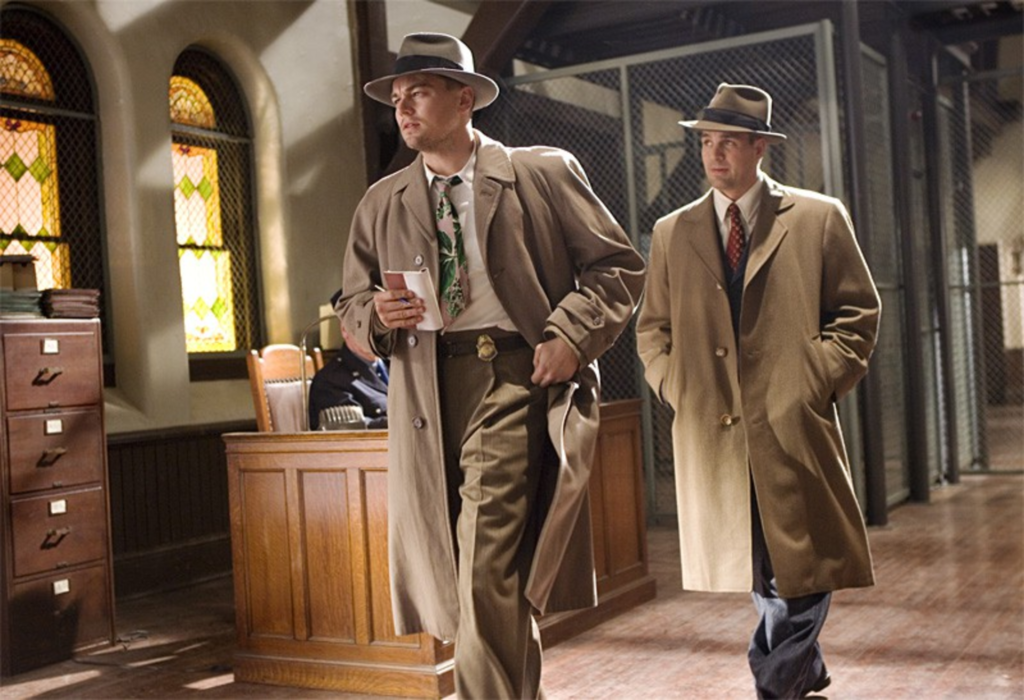 Martin Scorsese’s Shutter Island begins with U.S. Marshal Teddy Daniels (Leonardo DiCaprio) seasick, head in the toilet. The film is his prolonged purging, with Daniels coughing up chunks of his back story in flashbacks and dreams. He joins his new partner, Chuck Aule (Mark Ruffalo) topside, and their destination looms into view: an ominous hunk of rock in Boston Harbor that houses Ashecliffe Asylum, where they’ve been assigned to find a missing inmate.

It’s a gathering-storm approach that anticlimaxes at a tidy, ecclesiastical-looking brick campus. They’re shown the grounds by progressive chief physician Dr. Cawley (Ben Kingsley), who manages to seem both a natty patrician liberal, circa 1954, and a bit of a satyr, with his bald head and goatee and ironic twinkle. They also meet Cawley’s colleague, Dr. Naehring (Max von Sydow). Daniels, an ex-GI who witnessed the liberation of Dachau, takes an immediate dislike to the German.

As Daniels and Aule begin to investigate, there’s a sense that their presence is an inside joke with the staff, that they’re being given rehearsed misinformation. Daniels reveals that he’d heard sinister rumors about Ashecliffe long before this assignment, and not even a pretense of cooperation and normalcy can outlast their first hurricane-force, dark-and-stormy night on the island, when they trade their soaked civvies for orderly uniforms.

As the outline of a conspiracy comes into view, Daniels’ digging brings on strobing headaches, hallucinations and a shrinking list of trustworthies that ultimately includes only his dead wife, Dolores, visiting him as a beyond-the-grave Technicolor prophet (Michelle Williams). As for DiCaprio, well, he has made suffering a specialty, and he does so with an abandon that is frightening.

Production design maestro Dante Ferretti’s island is a rugged symbolist mythscape, pocketed with hidden places. Though the film takes place entirely out to sea, the mainland isn’t left behind — it’s concentrated here into a midcentury chamber of manmade horrors. Loonies praise their island as a safe haven from news “about atolls, about A-bombs.” There are rumors suggesting that the House Committee on Un-American Activities is dabbling in brainwashing experiments. Daniels flashes back repeatedly to Dachau. In the film’s web of visions, no violence is unsuitable for aestheticization.

Shutter Island‘s 138-minute duration is dangerously epic for a talky thriller, but you forget the time — and even if the plot makes sense — because it doesn’t matter. More attention has gone into filigreeing details into scenes than worrying about the way they’ll fit together. It engages you moment to moment, even as the overall pacing stops and lurches alarmingly.

Scorsese is as much a movie lover as a moviemaker. This is manifest in his too-much-discussed homages, but also in his understanding of how his characters have themselves been shaped by entertainment, how they model themselves as actors in the American drama. Without revealing too much of an ending that everyone will soon insist on telling you their opinion about, Shutter Island, deep in its camp gothic trappings, seems to me a flea-pit occult history, with Daniels’ head space a confusion of “Hideous Secrets of the Nazi Horror Cult” schlock, hard-ass Mickey Spillane machismo, Cold War psychic confusion, and the post-traumatic bad dreams of ex-servicemen.

In his documentary Personal Journey, Scor­sese spoke of the ’50s as a time “when the subtext became as important as the apparent subject matter, or even more important.” In Shutter Island, his most distinctly ’50s movie, he replays the trash culture of the era as the manifestation of an anguished subconscious.