Shopping for summer brews, with help from the Flying Saucer 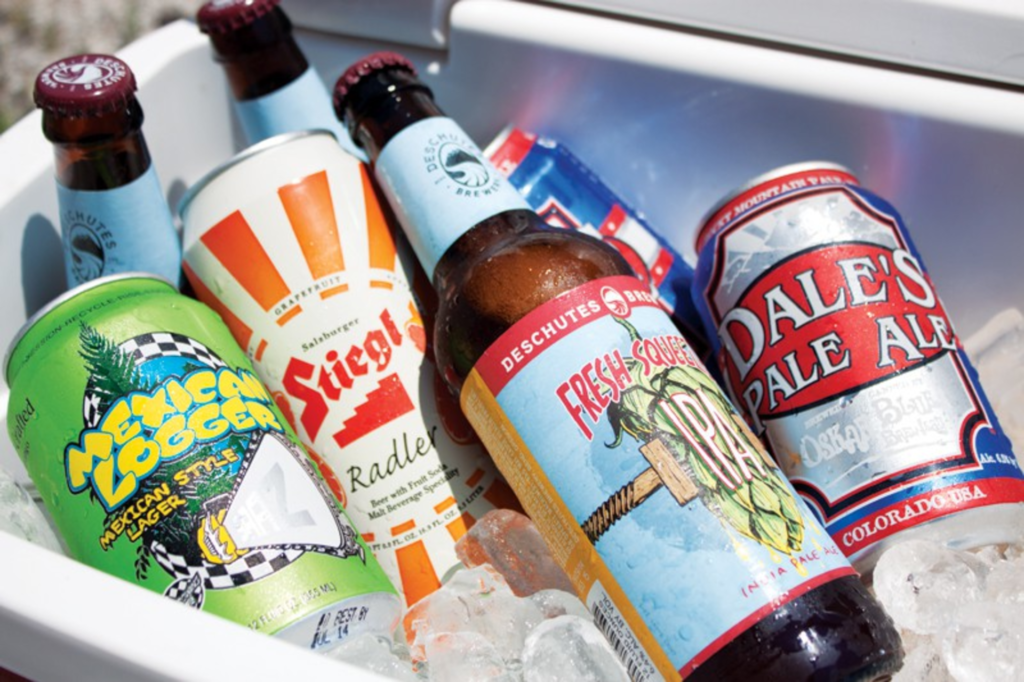 Summer is for cold beer — cold beer in sweaty cans, gripped in koozies. So I called Matt Gardner, general manager at Kansas City’s Flying Saucer, and asked him to take me beer shopping for a Fourth of July backyard barbecue.

My only request: Keep it craft. Forgo the Bud and the Miller and the Coors Light Summer Brew.

That’s no special challenge for Gardner, who has managed a list of more than 240 beers, reflecting some 100 brewing styles, since the KC Flying Saucer opened, in May 2008. He’s a hometown guy, growing up in Topeka before attending college at Baylor, and he hooked on at the Houston Flying Saucer before transferring to Charlotte, North Carolina, for three years and finally returning home.

Gardner meets me on a hot Thursday morning at the Prairie Village Rimann Liquors. He hops out of his car and picks up a baby carrier from his backseat. His 3-month-old daughter, Elena, is sleeping. The three of us head into the store.

This time of year, Gardner says, he respects the can. “It makes sense to me,” he tells me. “They leave a smaller footprint, and they’re easy to dispose of. You don’t have to worry about broken bottles.”

As we browse the store, Gardner’s first tip is to go for variety: “I want to get two to three different styles.”

He’s an IPA fan, and he’s quick to point out the red, blue and silver cans of Oskar Blues’ Dale’s Pale Ale. The Longmont, Colorado, brewery was the first craft-beer maker to can its brews, and it started distributing in Kansas only this past March. (Its beer isn’t yet available in Missouri.)

I grab a six-pack.

Gardner also raves about Deschutes’ Freshly Squeezed IPA. “It’s fantastic,” he says. “Bright, citrusy, tropical fruit. Beautiful, beautiful IPA. That’s one of the best IPAs that you can find out on the market right now.”

I pull a sixer from a cooler — bottles, this time.

We decide to cross the state line to see what the Show-Me State has that Kansas doesn’t.

“I like living so close to State Line Road,” Gardner says. “You have the ability to cross State Line and find all of the different beers easily. One of my favorite breweries is [Michigan brewer] Bell’s, and you can’t get it in Kansas. I always like to have some Two Hearted Ale on hand, and I have to go to Missouri to get it. Luckily, it’s not that far.”

At Hy-Vee Wine & Spirits, we face a long cooler of craft beers. Gardner picks out a four-pack of Stiegl Radler. The bright orange-and-white tallboy cans (16.9 ounces, 2.5 percent alcohol by volume) hold an elixir that’s perhaps more grapefruity than it is beery. Gardner says the low ABV and the citrusy flavor make it a great summer beer.

I also pick up Nebraska Brewing Co.’s EOS Hefeweizen, which I already know as one of my favorite wheat beers.
“They do a lot of good stuff,” Gardner says. “We sell quite a bit of it.”

“That’s cool because it’s a light-bodied, very effervescent beer,” he says. “It’s very approachable for people who may not like craft beer. It’s just a fun beer.”

Gardner puts the Ska in our basket and adds a couple more beers to the mix: Founders’ Rübaeus, a raspberry ale that he says is more approachable for beer nondrinkers, and Perennial’s Tart Hopfentea, a Berliner Weisse brewed with a tropical-tea blend by the St. Louis small-batch brewery.

As for Hopfentea: “It’s really beautiful, citrusy, lightly tart beer. Everything they do is out-of-this-world.”

The key is mixing up the styles, he adds. “I want to get a variety of styles, so people aren’t forced to drink one specific beer, whether it be an IPA or a pale lager, or whatever.”

As Gardner drives us back to our meeting spot, he admits that his own parties tend to end up full of wine drinkers.

“Generally, we have a lot of friends who drink wine, so there’s a lot of wine as well,” he says. At this, Elena wakes up and lets out a cry.

“I always make sure that there’s beer there, too,” he says.