Shock Treatment allows you live out your nightmare fantasies

The zombie king of Kansas City bangs against a chain-link fence inside a building that was once a sporting-goods store in North Kansas City. The monster, birth name Dylan Thomas, carries out the bidding of Adam Roberts and Brent Miller, who run the Screenland Theaters chain and, now, a combination haunted house and escape room called Shock Treatment at 1735 Swift.

On this wet Monday night, Roberts and Miller play puppetmasters, watching from a control room via security cameras as the games unfold. It’s a quasi-real-life version of meta horror flick Cabin in the Woods, with the men barking out commands to the players through an intercom (while staying on top of the Royals game). Meanwhile, four guys, each of whom has been hired to work at Shock Treatment, attempt to solve puzzles and riddles while avoiding a deadly zombie infection.
So goes another trial run before Shock Treatment’s grand opening Friday, May 27.

For months, anyone about to watch a movie at a Screenland theater has been treated to a cryptic, VHS-grainy tease for Shock Treatment; the trailer promises “fully immersive horror games.” Now it’s here, with Roberts and Miller setting up shop with Kris Nardini.

“All three of us are horror guys,” Roberts tells The Pitch on a mid-May afternoon. “We’ve talked about making a haunted house because we think a lot of them are dated. They’re cool, but they’re cool when you’re 16 — not 10 years later, when you’ve been going every year. It gets kind of boring. We went to an escape room last year, when Breakout opened, and thought this is an interesting way to maybe look at the haunted house.”

The idea is an evolution of the haunted-house experience: something far less passive. 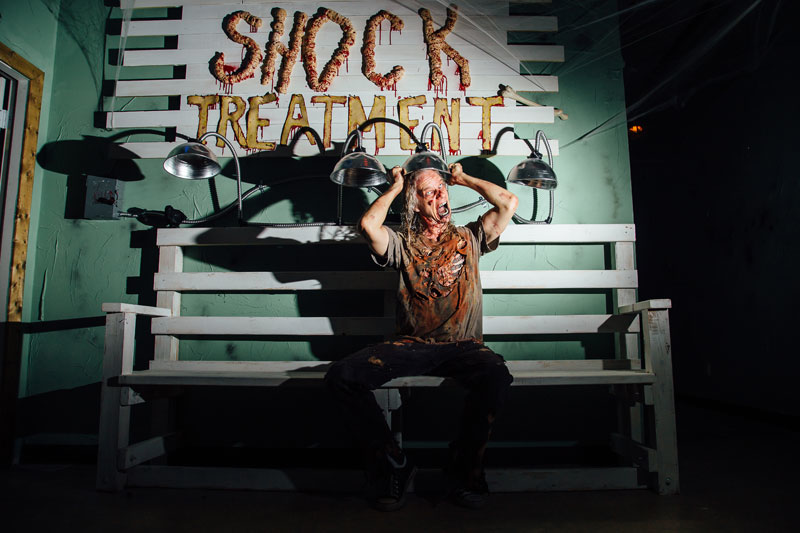 “Instead of watching it or just merely walking through a haunted house where people jump out and go boo, you’re actually stuck in whatever environment you’re given,” Roberts says. “One of our rooms is zombie-themed, and in that one, you play through the classic horror setup of: ‘Something’s gone wrong in a lab and now there’s zombies on the loose.’ So you actually get to play through that experience and the story, and there’s elements to discover and uncover, and it’s more about surviving and points than it is about getting out and escaping the room.

“It’s so different from a haunted house,” Roberts adds. “It’s a much more intimate experience, where you’re not being pushed through, you don’t hear other people screaming. It’s just kind of you doing it.”

Roberts came up with the outlines for the story behind each room, but he says each of the partners contributed to the storytelling. As in escape rooms, you gather items and complete goals and objectives to earn points. “It’s a real-life video game, is what it is,” Roberts says of the story behind the first room. “It’s definitely like a 1990s survival horror game, like Resident Evil or Myst or Silent Hill.” (It’s also, the partners agree, more or less PG-13 — “for pretty much everybody,” Miller says.)

“We did want you to feel like you’re in a movie,” Roberts says. “So this first one takes place in 1996, so all of the things that you have and technology, we wanted to be specific to that time. So you’re using VHS tapes and cassettes. Things are shot on Super 8 and VHS, so we used all of the technology. We didn’t cheapen out.

“It was very much like developing a movie in every aspect,” Roberts continues. “It’s so much more intensive than we ever imagined it would be. We had to figure out how you could actually play this game and have all of those functions make sense.”
As in a video game, death isn’t necessarily the end for your character. At least in the first room.

“In this room, there’s only an infection level,” Roberts says. “We’re still trying to work our way around if we can allow you to die — the person playing the game — and if you can actually physically kill something, because that’s badass. In the second room, yes, there’s a way for your character to die. And when you die, something happens. But that’s all I’m going to say.”

“And it’s not sitting outside in the car waiting for your friends,” Miller says.

Roberts says that second room, titled “Dinner for Four,” should be ready in early June.

“Then things get hardcore,” he says.

“The third one we have all fleshed out. So it’s just a matter of us putting whatever goes into that into that. That one is a really bloody room,” Roberts says. “The fourth one, we’re a little ways out.”

Over time, each game will change.

“Initially, we were like, this is going to be Season 1, and we’ll change it like a TV series,” Roberts says. “But now, I don’t know. We’re like, we can just change a room without changing a room. By that I mean, we can add more actors in. We can add more zombies to deal with. We could change it to be more difficult or less difficult … or changing a couple of puzzles or adding puzzles or getting rid of puzzles.”

He adds: “You don’t want to make things too easy. You kind of want it to be difficult, and a lot of it does rely on a second replay. There’s a lot you’re going to miss the first time and that’s totally intentional.”

Unlike haunted houses, Shock Treatment will run all year. After opening weekend, regular hours will be Thursday through Sunday ($35 a game; book at shocktreatmentkc.com). Miller says gamers will sign a waiver to protect each party. But he stresses that the games are safe to play. “Obviously everything we’ve designed is with your safety in mind,” he says. “As far as people freaking out, I think we have a safe word in mind for those who just can’t handle it. We’ll get them out of there.”

“We’re not going to put a power saw between your legs,” Roberts says. “Why would we ever do that? Wink.”

Jessica Kittams contributed to this report.