Open a ramen shop in the Midwest, and you’re subject to the ignorant suspicion of two constituencies.

One puzzled group consists of recovering undergrads for whom the word “ramen” inexorably conjures 25-cent Styrofoam cups of frizzy noodles and freeze-dried shrimp, and who loudly balk at paying many bits more than that for the good stuff. The other, much smaller group is made up of insufferable hipsters who did a minimester in Okinawa and will forever drone on about the authenticity of noodle-driven cuisine.

Both kinds of ramen troll should be more than satisfied by midtown’s 5-month-old Shio Ramen Shop.

As helmed by chef Patrick Curtis, the place serves food to persuade skeptics, set purists’ heads nodding gratefully — and welcome the ramen-curious to the rest of their lives.

In a touch that would sway any ramen truther, Curtis makes his noodles in-house, using an imposing machine roughly the size of a particle collider. On my first visit, I surveyed the cramped kitchen and server stand and questioned whether the machine was worth the precious real estate.
Then came my first perfect, al dente noodle.

On that occasion, and each time I tried it after that, the pasta delivered both heft and a springy bite. It’s a noodle unrivaled elsewhere, and if you’re one of those people who’s been saying there’s no way you’ll pay $12 for ramen, you’re about to eat your hat.

Those noodles are the focus of all four ramen bowls here, one of which gives the restaurant its name. “Shio” means salt in Japanese, though the restaurant’s website encourages eaters to think more “salt of the earth” — the wholesome toil of noodle crankers — than sodium.

The eponymous Shio bowl, however, evokes both. Think of it as chicken-noodle soup dressed in black tie, marrying traditional comfort to modern refinement. The thin broth is clean and balanced, with subtle pulses of chicken and dashi and a dusky kick from the requisite sea salt. It’s so therapeutic, you almost crave a hangover to cure.

Then again, if you’re well enough to point and grunt, order the Shoyu — for my money, the best bowl in the city right now. The noodles are still great, but the star in this case is the savory broth, which uses four kinds of soy sauce and tamari, its richer Japanese cousin. The result is a meaty umami throat-punch that reveals its multiple layers as it lingers on the palate.

The accompaniments beef up the flavor without overwhelming it. Tender bamboo shoots and delicate shiitake blooms add texture and a faint acidic bite. The crowning touches are a fan of sliced pork belly and the slow-cooked suggestion of an egg. The latter you marvel at as you would a well-practiced bit of street magic. It holds its shape in the bowl through vigorous slurping and impolite noodle-shoveling, but one snip of the chopsticks and the yolk dissolves into the broth like cotton candy on the tongue. (You can add an egg to any of the other bowls for a dollar — a dollar very well spent.) 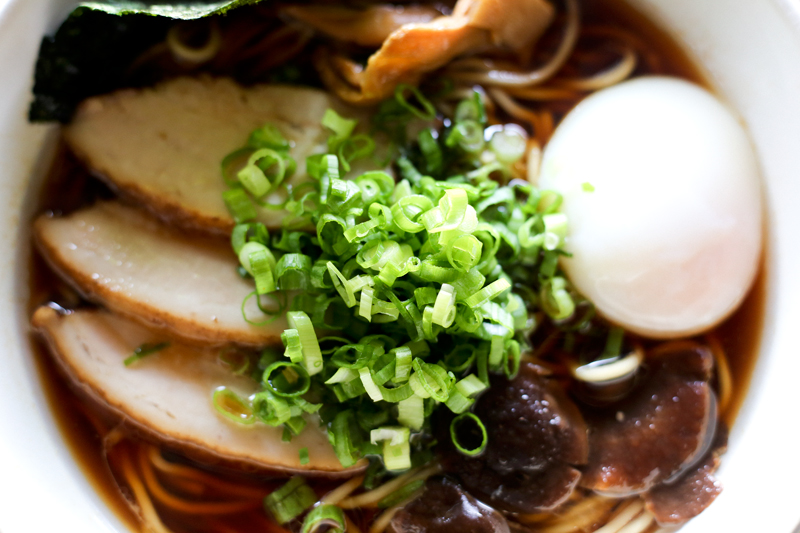 The pork belly in the bowl I sampled was, on that evening, a mild misstep. Although it added necessary weight to the bowl, the meat wasn’t as flavorful or as fatty as I wanted. (Columbus Park Ramen Shop’s braised pork jowl, has, I confess, ruined me for all other comers.)
Pork proves the undoing of the Tantanmen bowl, the restaurant’s only disappointment.

Billed as the spicy option — “It’s about a seven,” my server suggested, rounding up for local tastes — the bowl combines ground pork, wilted greens and chilis in a cloudy broth dotted with chili oil. Ground pork is right for the bowl, but the meat itself was on that day underseasoned and drab, evoking loose-meat cafeteria sandwiches of yore. The broth was also underwhelming, the chili oil its dominant flavor. The Tantanmen’s curb appeal is undeniable: It is a vibrant, moody red, confettied with scallions and sesame seeds. But to earn its slot next to Shio’s more creative, complex bowls, it needs a makeover — starting with more salt, sesame and aromatics.

Shio’s best pork-themed bowl contains no meat at all. The vegan Tonkotsu (Japanese for “porksplosion”) allays at the first spoonful any concern that you’re giving up something. The broth — thickened to a spoon-coating gloss with sesame paste, miso paste and sweet-potato puree — is as hearty and rib-sticking as the most porcine Asian dish. Tender cubes of sweet potato stand in just fine for animal protein (though, on my second visit, the vegetable’s centers were cold) in what is, overall, Shio’s most filling dish. (I’d add that egg again; if you’re feeling especially hungry or contrary, you can add meat for a couple dollars extra.) 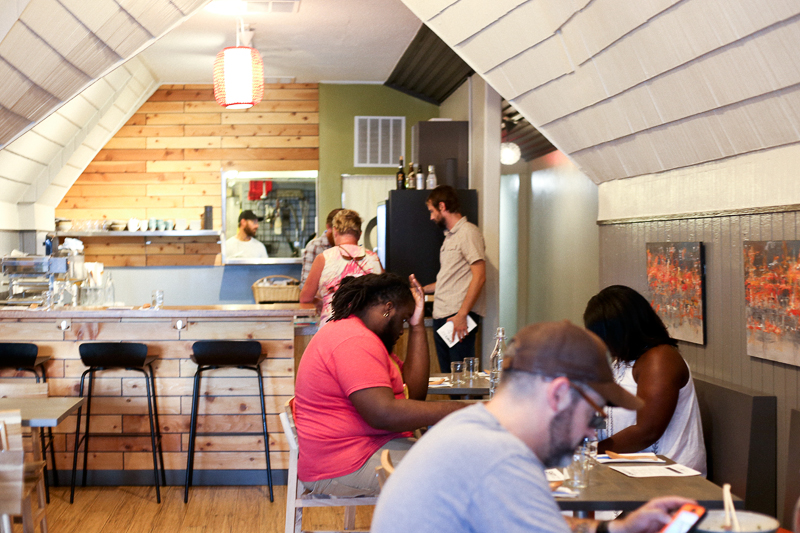 Shio’s address, the attic-size 3605 Broadway, has been home to, among others, Foodoo, Mr. Good Chicken, Nabil, and the Grille on Broadway. In this iteration, the room has received some much-needed updates without sacrificing charm. The distinctive pitched, wood-shingled ceiling is intact, but Curtis and his staff have brightened it — and the dining room — with a modern palette of pale grays and tangerine accents.

Shio’s alcohol selection is limited: Beerwise, aside from the requisite Boulevards, the restaurant offers Asahi and Sapporo, both light, uncomplicated lagers, and Hitachino Nest’s White Ale, a hazy, Belgian-style beer worth sampling (though not for the $9 price tag). But four brands of sake and two decent house wines give the date-night set a few options.

And strange as it sounds, Shio feels like more of a romantic destination than a typical ramen counter. This is to the benefit of anyone who believes, as I do, that there’s no better way to enchant a lover than by speed-slurping noodles down your pelican gullet (don’t bring me flowers — I’ll accept a poncho) and pretending you know how to use chopsticks. But plan ahead. With only 25 seats, the restaurant can be crowded at peak times, and rightly so. If the tables are full, sign yourself onto the list kept by the door, and you probably won’t have to wait long. Ramen doesn’t reward the dainty.

For now, an early dinner is your best bet: Snag a seat at the bar, make like a hipster and down your ramen before it gets cool.