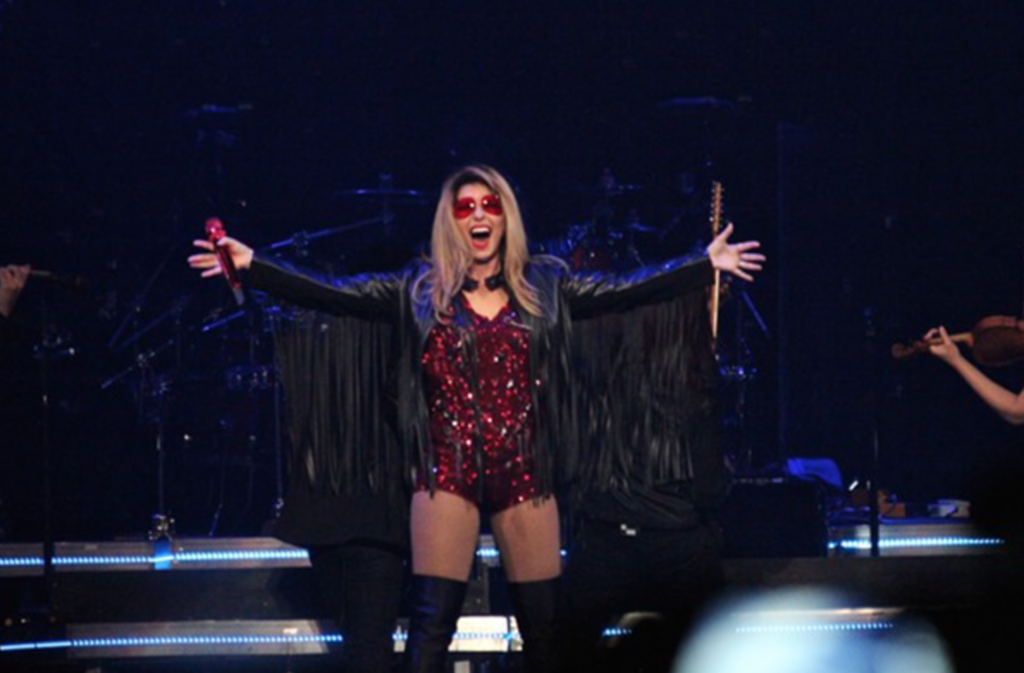 If we are to believe Shania Twain’s recent interview with Rolling Stone, then yes, her Rock This Country! tour will be her last. And as far as goodbyes go, last night’s show at the Sprint Center was top-notch.

Twain hasn’t released a studio album since 2002’s Up!, but the crowd responded to her as though she had never been away. And, for her part, Twain performed as though she were at the height of her career rather than headed for self-imposed retirement. 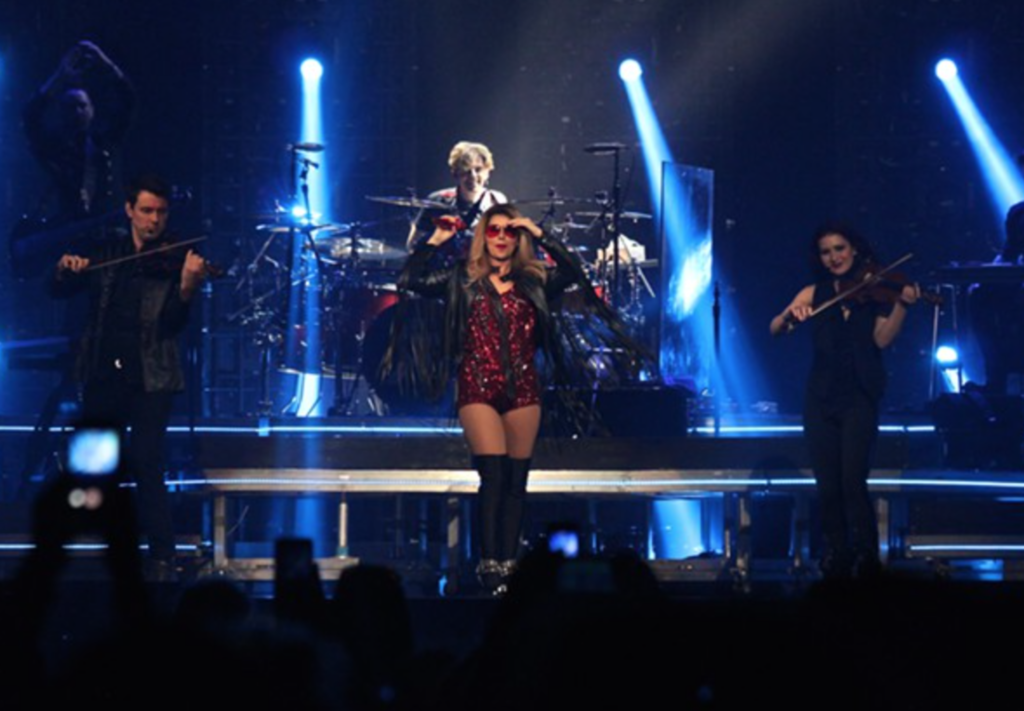 The show began around 8:45, as smoke cascaded over the stage and strobe lights projected patterns on the audience (which was, as expected, overwhelmingly white and feminine — the amount of flow-y, fringed summer dresses paired with cowboy boots was comical and alarming). To the opening chords of “Rock this Country,” Twain popped out of a trap door in the center of the stage garbed in a fringed black leather jacket, red-glitter onesie and black knee-high platforms. She looked stunning — and I don’t mean that in the back-handed, snide “for her age” kind of way. (Why should we be so shocked that a 49-year-old woman can look hot in hot pants?) No, Twain looked very much like she was ready to rock this country. Or, at least, Kansas City.

And, yes — she was still sporting that blond hair. Sigh. I don’t want to talk about it.

Twain walked to the edge of the stage, stopping short of the catwalk that extended to the middle of the floor. Six of her seven band members flanked her, all wearing headsets and professionally whitened smiles, proudly toting their instruments (two violins, six guitars — the drummer stayed at his kit).

Splashy entrance aside, Twain’s show had a bumpy start. The first three songs were all a bit off: Her band often drowned out her vocals, and she was noticeably behind the beat as she sang several verses of “Honey, I’m Home.” It seemed that Twain couldn’t hit the high notes for “You Win My Love,” in which she would pull the mic away and let her voice go quiet in the chorus. There were also several moments during this song where Twain seemed to be fiddling with her earpiece, so perhaps we can blame technical issues.

In any case, the audience didn’t seem to notice — or if it did, no one cared. By the time Twain cued up “Whose Bed Have Your Boots Been Under,” whatever problems — with the sound or with her own nerves — were gone. She shed the leather jacket and weird red-tinted 1990s sunglasses (revealing some equally cheap-looking — but still delightful — red-glitter eyeshadow) and dug her heels into a truly Vegas-worthy show.

This tour is actually modeled after Twain’s recent residency at the Colosseum at Caesar’s Palace, so it should not have been a surprise when, during “Any Man of Mine,” she hopped down into a little motorized trolly that slowly wheeled her around the edge of the floor as she sang, doled out high-fives and made generous eye-contact. The effect was rather like a homecoming queen, waving to her subjects from the safety of her float. Twain’s cool slipped noticeably when, at one point, a mob of excited girls threatened to … I don’t know, really, shriek too loudly? She looked relieved to be delivered back to the stage, where she disappeared for a quick costume change (her first of three).

A few minutes later, Twain was back for “I’m Gonna Getcha Good!” — this time in a vampire costume long black duster coat, black fringe leg warmers and red platforms. She arrived amid impressive puffs of fire that burst from the floor of the stage; even from my seat in the risers, a good 10 yards away, I could feel the heat. It was no surprised when Twain dropped the coat for “Come On Over,” revealing a very busy leather vest with a fishnet-sleeve top.

Twain welcomed back opener Gavin DeGraw to duet with her on “Party For Two,” the only low point of the evening. That song was a disaster: Twain’s voice is lower and far more powerful than DeGraw’s, and in a best-case scenario they would be ill-fated karaoke partners. As it happened in “Party For Two,” DeGraw was off-key, his lyrics almost entirely unintelligible. It was cringe-worthy, and thankfully, over quickly. 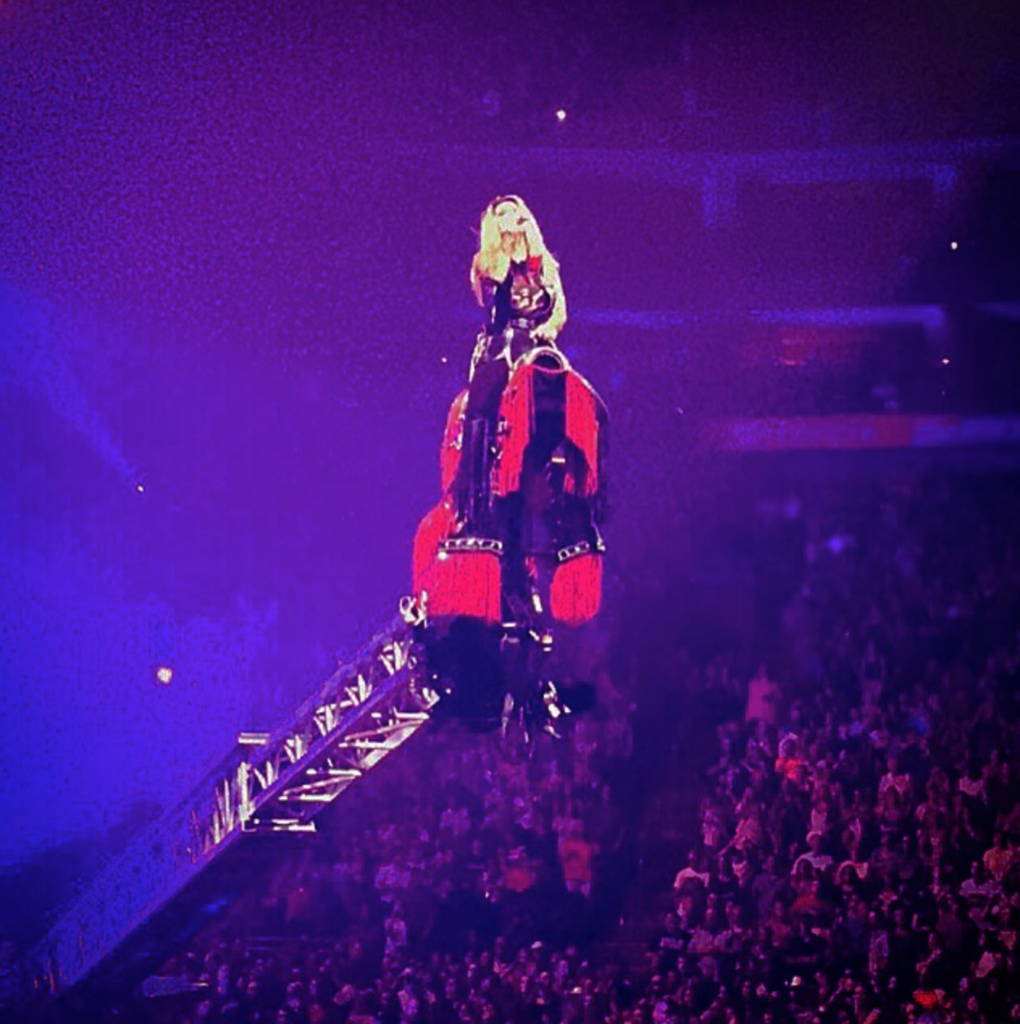 With DeGraw gone, Twain hopped up on a mechanical bull on the edge of the stage, and for a moment, I got super excited that she would actually ride it. Instead, she delivered a giggly soliloquy. (Twain is not so spectacular when it comes to stage banter; the perfunctory shouts of “Kansas City!” appeared every other song.)

“It’s been a really long time since I’ve been up here, that’s for sure, and I’m loving every second of it,” Twain told the crowd as a crane raised her, atop the bull, several feet into the air. “When you stop doing something for a long time, it’s not like you forget how to do what you love. … But you start to lose your nerve. But I gave myself a kick in the butt and got myself back up here!”

From there, Twain launched into “Up!” (obviously), and the crane slowly rotated her around the arena as she sang. I half-expected some sort of catapult maneuver. When Twain returned to the stage, it was time for the predictable acoustic portion of the evening. She sat on a barstool, crossed her legs and strapped on a guitar for “Today Is Your Day” (her sappy 2011 single, during which several hundred smartphones were waved through the air at Twain’s request), “No One Needs to Know” and “You’re Still the One.” (During the last of which, I spotted a proposal take place on the floor a few yards from my seat. Aww.)

Another instrumental break for a costume change — while some seductive, boudoir-like videos of Twain in various red outfits flashed on the jumbo screens — and the lady of the night reappeared, this time dressed in a black sequined graduation robe for “From This Moment On.” (What a perfect segue for the newly engaged couple. Aww. Why, it’s almost like Twain expects that kind of thing to happen.) 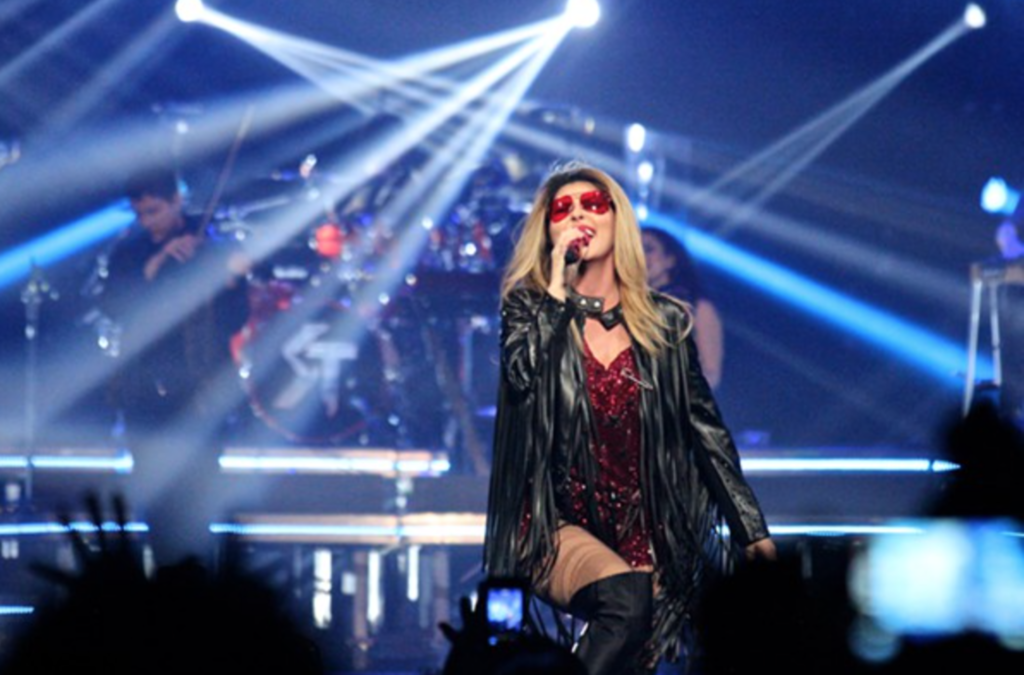 After Twain’s angelic rendition of that eternal-love ballad, she stripped off the dress to reveal thigh-high red-glitter platform boots and a sequined black bustier. The pyrotechnics made a grand return, this time with the aid of actual fireworks. This was Twain’s introduction to “That Don’t Impress Me Much,” but believe me — the crowd was impressed.

At 10:15, after “(If You’re Not in It for Love) I’m Outta Here!”, Twain departed once more as the stage darkened and the audience called for her encore.

It was a short wait, and Twain made her final entrance just as she had made her first: Popping up from the floor like a birthday surprise, wearing another set of platforms and her showiest bedroom corset yet. She strut out to the center of the catwalk for the much-anticipated “Man! I Feel Like a Woman” as flames burst behind her.

Her voice — which had gotten stronger with every song — was in top form for this final number, and Twain knew it. As several cannons unleashed a storm of shiny confetti upon the crowd, Twain — looking satisfied — flashed a big smile and quick “goodbye” before strutting back to her exit.

Leftovers: I actually remember Gavin DeGraw’s first album, 2003’s Chariot. I feel like I remember an artist who could carry a tune. And to be fair, his opening set was enjoyable enough. But whatever sound he was making during “Party For Two” was horrifying. There’s no way around it. That mess will haunt my dreams.

Also, what was with people taking off their boots and hoisting them up in the air during “Whose Bed Have Your Boots Been Under”? Since when is that a thing?

Overheard: “This is, by far, the gayest show I have ever seen.” — A gay man sitting behind me.

Setlist:
Rock This Country!
Honey, I’m Home
You Win My Love
Whose Bed Have Your Boots Been Under?
I Ain’t No Quitter
Love Gets Me Every Time
Don’t Be Stupid (You Know I Love You)
Any Man of Mine
Ka-Ching! (Interlude)
I’m Gonna Getcha Good!
Come on Over
Party For Two (with Gavin DeGraw)
Up!
Today Is Your Day
No One Needs to Know
You’re Still the One
Don’t! (Interlude)
From This Moment On
That Don’t Impress Me Much
(If You’re Not in It for Love) I’m Outta Here!
—
Red Storm (Instrumental)
Man! I Feel Like a Woman!