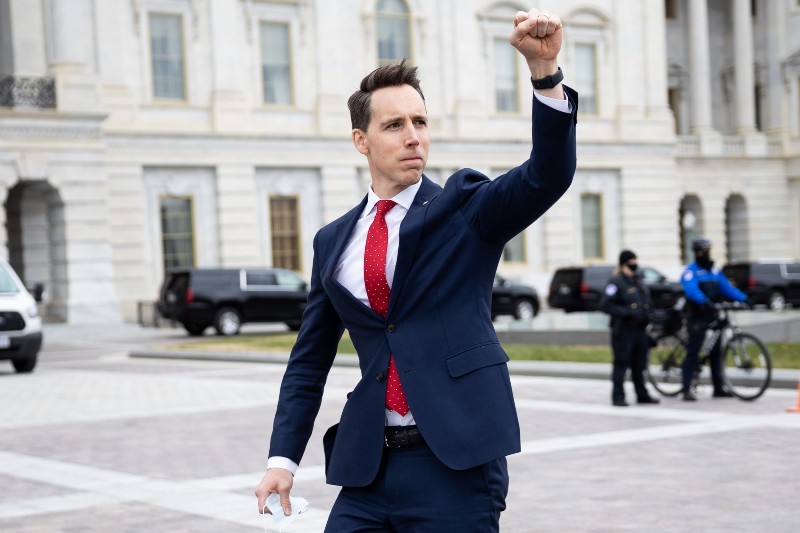 Sen. Josh Hawley (R-Mo.) gestures toward a crowd of supporters of President Donald Trump gathered outside the U.S. Capitol to protest the certification of President-elect Joe Biden’s electoral college victory on Jan. 6, 2021. Some demonstrators later breached security and stormed the Capitol. // Courtesy of E&E News and Politico

Sens. Ted Cruz and Josh Hawley are facing an ethics complaint in the Senate for their actions that led to and supported the insurrection at the Capitol Jan. 6. The letter, sent to the Ethics Committee chairman Chris Coons, D-Del., and Vice Chairman James Lankford, R-Okla., says that the senators “lent legitimacy” to the mob that stormed the Capitol after the supposed, and false, election theft.

The complaint seeks an investigation into Hawley and Cruz’s role in the insurrection. Information including if the senators or their staffers communicated with the organizers of the rally, what plans they knew about the rally, and if they received donations from any organizations or donors that funded the rally.

“The question the Senate must answer is not whether Senators Hawley and Cruz had the right to the object to the electors, but whether the senators failed to ‘put loyalty to the highest moral principles and to country above loyalty to persons, party, or Government department’ or engaged in ‘improper conduct reflecting on the Senate’ in connection with the violence on January 6,” the senators wrote in the letter.

The Senate Ethics Committee has every cause to investigate the two senators. After all, both Hawley and Cruz sent out fundraising messages to their base even while the insurrection occurred. Even after the Capitol attack, the two senators still led the objections to the election. Not to mention, Hawley raised a fist in solidarity to those at the rally who would later go on to storm the Capitol.

If the committee finds either Cruz or Hawley at fault, they will then determine the punishment.

The discipline could be either expulsion from the Senate or censure. Expulsion is rare—only 15 senators have ever been expelled, all for disloyalty to the U.S. Censure is more common and nine senators have been censured between 1811 and 1990 for “conduct that tends to bring the Senate into dishonor and disrepute.”

Many, like Sen. Smith, D-Minn., and Sen. Manchin, D-W.V., believe Hawley and Cruz should be removed from the Senate. We also believe that.

Sens. Cruz and Hawley deserve a fair process and a chance to explain themselves and their role in the January 6 Capitol siege.

But unless we learn something new, based on what we’ve seen so far, I don’t believe they deserve to remain in the Senate. https://t.co/jg3iKekikl

Hawley and Cruz both criticized the letter, as predicted.

“This latest effort is a flagrant abuse of the Senate ethics process and a flagrant attempt to exact partisan revenge,” Hawley said. “Missourians will not be cancelled by these partisan attacks.”

Hawley is no stranger to decrying just recourse to his actions as partisan attacks or cancel culture. When his book deal was dropped by Simon & Schuster because of his actions and lies that led to the insurrection, Hawley said it was because of the “woke mob.” Even after the book was later picked up by an offshoot of Simon & Schuster, Regnery. Many companies, including Hallmark and Cerner Corp., stopped their donations to our state’s very own spineless senator. Hallmark even wants their donation money back. And Loews Hotel will no longer be hosting Hawley’s fundraiser in Florida.

After many fundraising efforts have been stopped, his book was almost not published, and his mentor, former Sen. John Danforth said helping Hawley get into politics was the worst mistake of his life, Hawley is still in office. This storm of public recourse may seem like a lot, but Hawley will still be in office and wreaking havoc on our democracy in the name of blind, soulless ambition until his term is up in 2024.

Hawley claims to represent Missourians when he launches his political stunts that play to a base motivated by populism, but many Missourians are sick of it and sorry for how Hawley represents the state. Punishment from the private sector will not get Hawley—an elitist, Ivy league educated man who doesn’t even live in Missouri yet claims to be a voice of working-class Missourians—to end his political pageantry and stunts. This Ethics Committee investigation may be the only true condemnation he receives for his constant lies that stoked the ambitions of a violent mob until he can hopefully be voted out after this term.

It is clear Hawley and Cruz play only to their ambitions and live by no ethical compass—now it is just up to the Senate Ethics Committee to officially find that.

A look at the Johnson County School Board election results