See these artworks before their exhibitions close 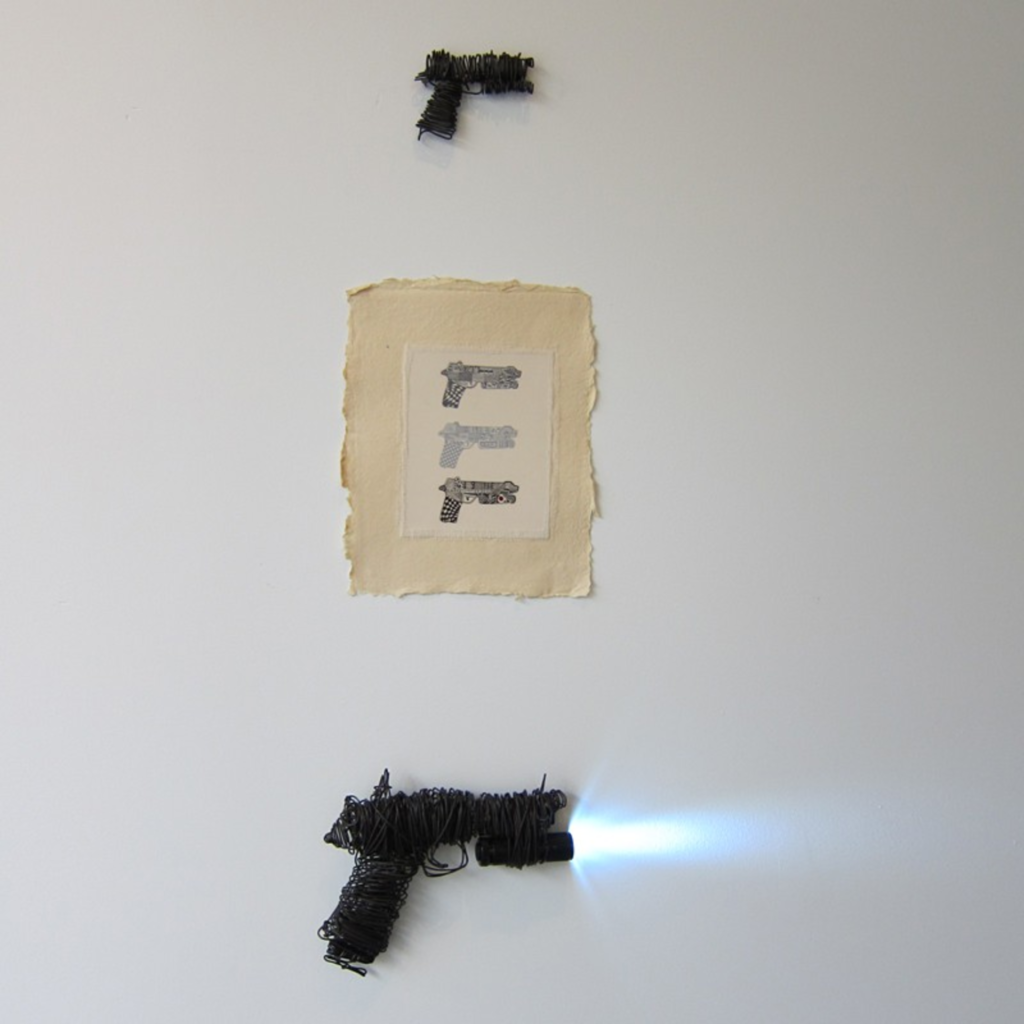 The Todd Weiner Gallery presents strong, typical examples of work by some of Kansas City’s better-known artists in What Makes You, You … . Works by Tom Sciacca, Hugh Merrill and Kevin McGraw balance well with others. A new “So . . . What Holds Up Your Sky” canvas by Robert Quackenbush complements a classic steel-and-glass sculpture by Stretch. Lenticular room views by Mary Ann Strandell play off the benchlike “Fragment,” in which John Northington has embedded concrete with shattered tempered glass, as if a car’s windshield and a chunk of sidewalk had fused together in a physics experiment.

A large, glitter-decked canvas by Mike Xenos stands out, as does Barry Osbourn’s 7-foot-square “How,” for their bold deployment of color and pattern. But if there’s just one reason to see this exhibition before it closes, it might be Steve Pistone. Building on his Wired show back in December, this Navy veteran and self-taught artist seems able to take on any medium with ease. Here, his series of looped-wire guns gets a wall of its own, where nine pieces are balanced in groups of three, including meticulous pen-and-ink drawings of guns filled with precise patterns. The effect is playful rather than violent, with the arrangement of threes repeated in each drawing: one rendition of the gun on the transparent paper’s surface; one drawn in reverse on the back; and one underneath, showing through the vellum. It’s a clever peek into an imaginary realm and a hint of things to come from this relatively unknown artist. 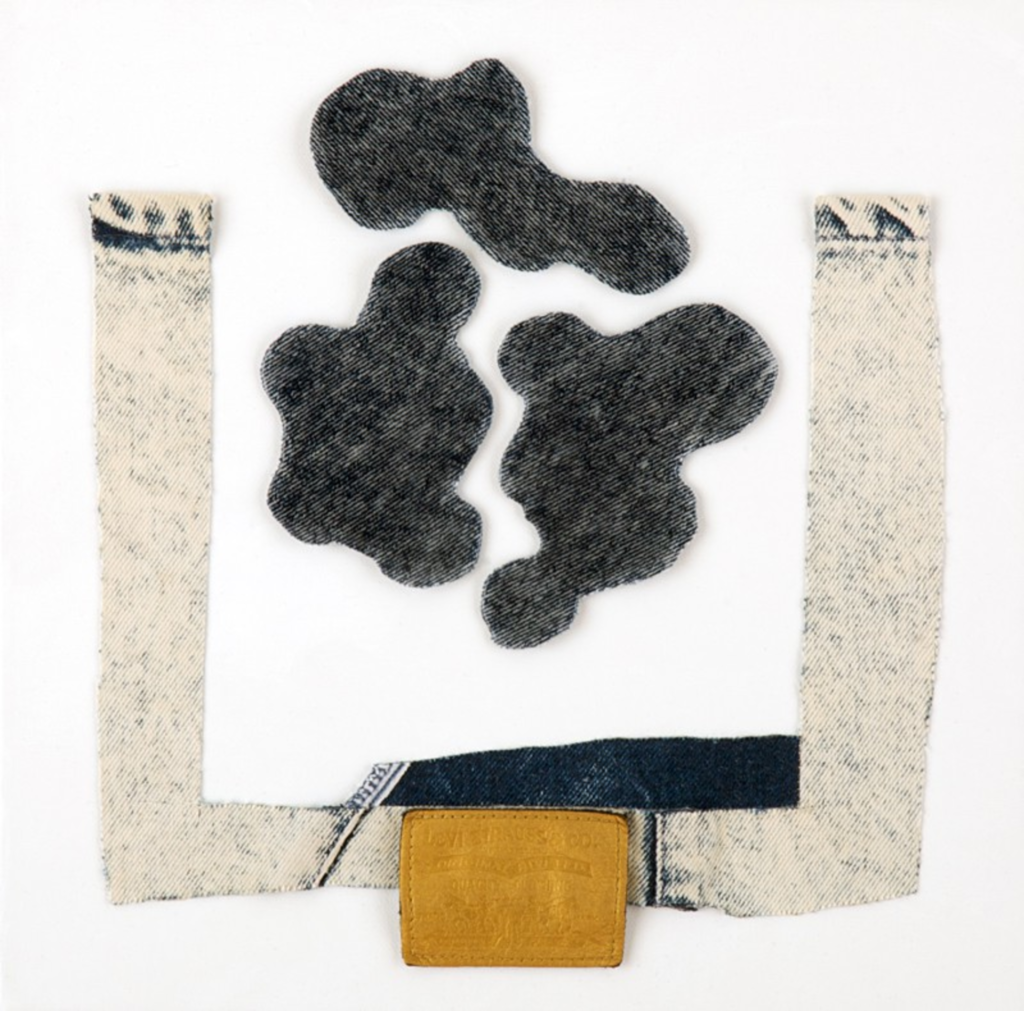 In Acid Wash: Playing With Consequences, Lynn Benson fashions cut-up, acid-washed denim into collages. “Cloud Stew,” above, is the best of the bunch. It’s good design, pure and simple: Benson accomplishes much, using very little, with repurposed materials. The artist keeps them identifiable (note the Levi’s patch), which contributes to the visual wit. Cartoonish shapes (the puffy clouds), a whimsical situation (puffy clouds in a stew pot) and the retro fabric add up to an image that’s satisfying as both visual joke and art. 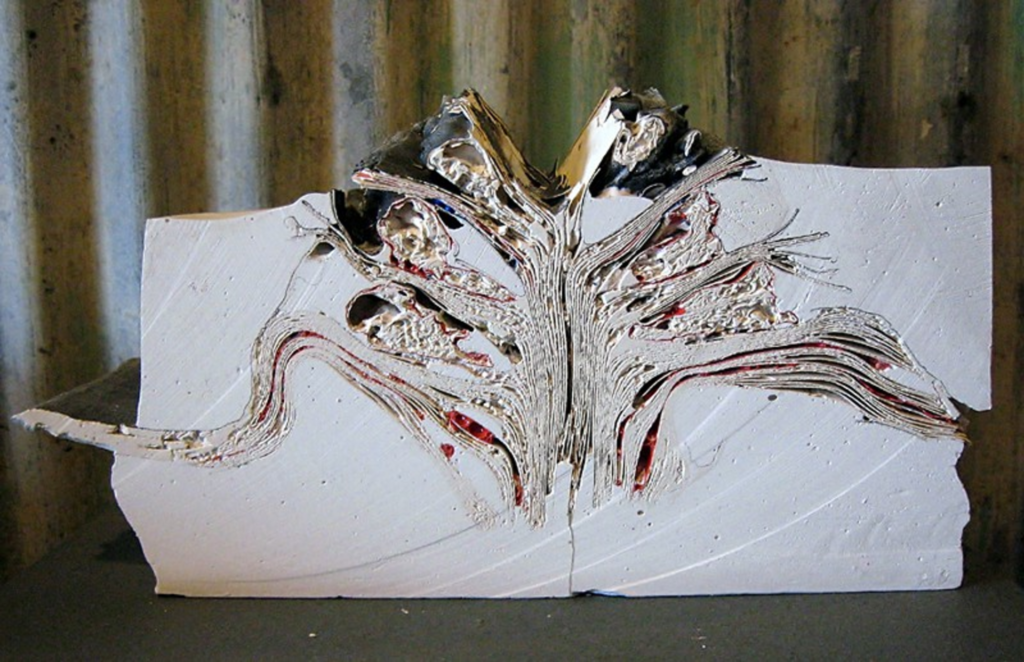 In Mélange, Emily Connell dips pages taken from thick, heavy volumes (such as dictionaries, a Bible or an encyclopedia) into liquid clay before firing them in a kiln. The process transforms the paper and binding into flaky, ashen specters of their previous forms, as in “Dante’s The Divine Comedy (Telephase),” above. Connell provides a lot to ponder — connotations of book burning and censorship or memorializing print material in the digital age, for example — but her beautiful, delicate works captivate on a purely visual level as well.