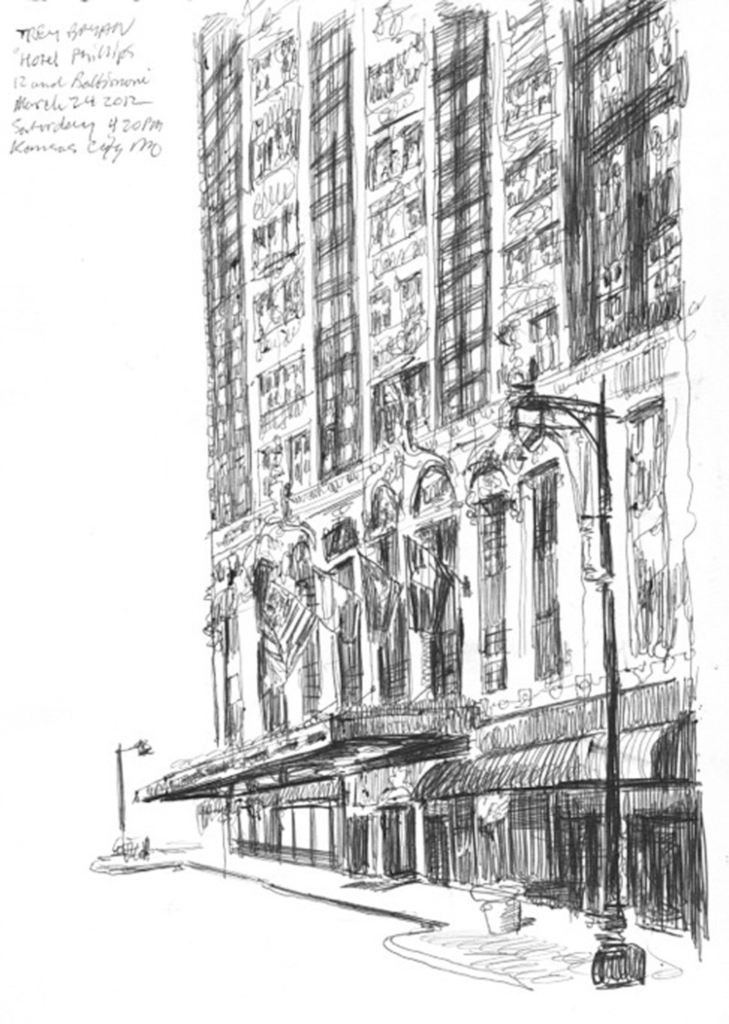 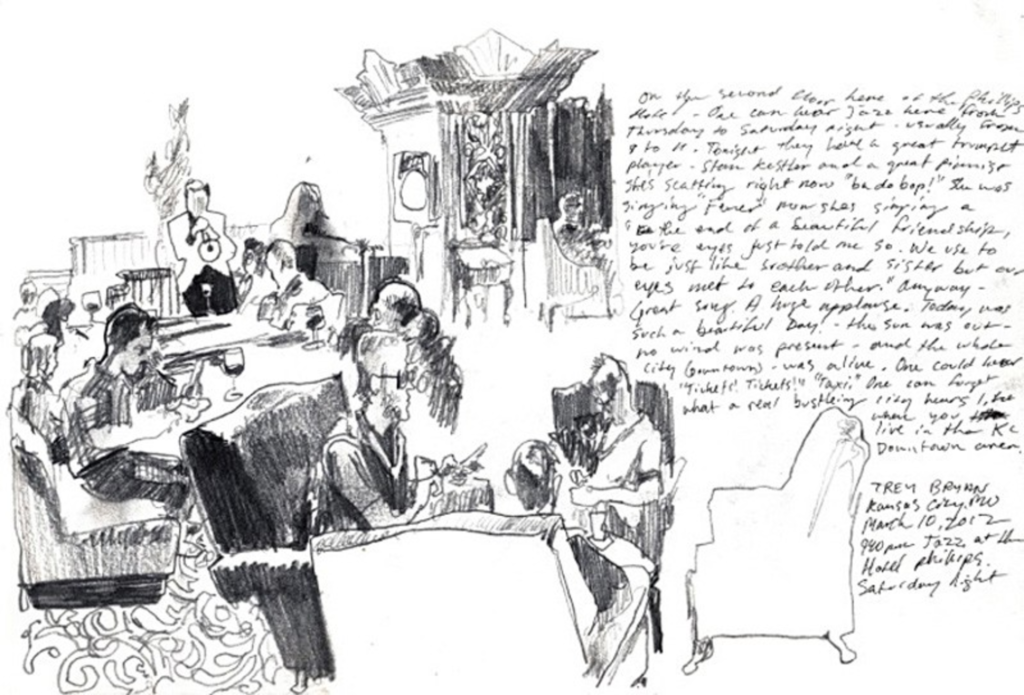 Visit the 12 Baltimore bar at the Hotel Phillips and you might get the feeling that you’re being watched.

Trey Bryan sits at a four-top, his back to the café’s mahogany wall. There’s a pot of coffee and a half-full cup in a saucer next to a spiral-bound sketchbook lying open on the table. Blaine Proctor, who’s in charge of sales and marketing at the downtown boutique hotel, sits beside Bryan, answering a question I’d just asked the artist.

“For a city this size, there is a lot going on in the arts,” Proctor says as Bryan sketches.

I’m concentrating on Proctor’s words but can’t quite shake that suspicion of being watched. Bryan isn’t looking at me steadily, but he’s observing me as he draws thin black lines on the paper with an ultra-fine-point pen. This is his job. He’s the Hotel Phillips’ official artist.

“Our sister hotel in Milwaukee — the Pfister Hotel — has had an artist-in-residence program with gallery and studio spaces for a few years,” Proctor continues. “We thought we’d put a similar program in place.”

Bryan benefits from a patronage model unlike any other I’m aware of in Kansas City. In exchange for studio space, Bryan lets the hotel use his drawings in marketing materials — menus and cards, for example. His paintings go up on the hotel’s interior walls in September. The business benefits from the cachet that comes with being seen to support the arts. Bryan gets exposure, a stipend and all the coffee he can drink.

But Bryan doesn’t seem to spend much time in his allotted studio space. Instead, he’s prominently visible here, hanging out in the hotel’s bar or lobby, or on the street outside the building to sketch its Art Deco–style exterior. The Phillips’ daily wine receptions and weekend jazz performances, he says, are his favorite times to draw. (He does use the studio; that’s where he translates his sketchbook drawings into paintings for the Phillips, ranging in size from 3 feet by 4 feet to as big as 8-by-9.

Bryan earned a degree in illustration from the Ringling College of Art + Design in Sarasota, Florida, in 2009. “But I call it ‘drawing and painting,’ ” he says, “because that’s what I did there.” He moved to the Kansas City area immediately after graduating to apprentice with legendary illustrator Mark English. Bryan used to do a lot of plein-air (a French expression used to describe painting outdoors) landscape paintings, but his interests have evolved.

“What I like about art is capturing life moments,” he explains.

Bryan describes himself as an introvert, but he has discovered that drawing people in public is a serious icebreaker. “When you keep looking and drawing, people ask you what you are doing,” he says.

And watching the locals who frequent the bar, along with the out-of-towners staying at the hotel, has been a lesson in human nature: “You notice who wants to be seen, who wants to have a conversation, who doesn’t.”

Bryan says composition is key to his drawings, a fact evident when you page through his sketchbooks. He takes advantage of the whole sheet of paper, balancing areas of text (his thoughts in the moment, descriptions of the scene at hand — reminders for later) with space where darker values emerge through repeated lines. Color comes into play, too, often through the use of unusual pigments. He dips the tip of his finger into his coffee and dabs it onto the paper where his drawing of the cup appears. The burgundy of wine or the grit of sugar decorate the surface of other drawings.

Bryan tells me that when he visited Milwaukee, Timothy Westbrook, the fiber artist who holds the artist residency at the Pfister Hotel, sewed a vest for him with special pockets large enough to fit a sketchbook. He’s not wearing the vest over his black T-shirt today. But as long as there are people nearby to be drawn, he doesn’t put away his sketchbook.