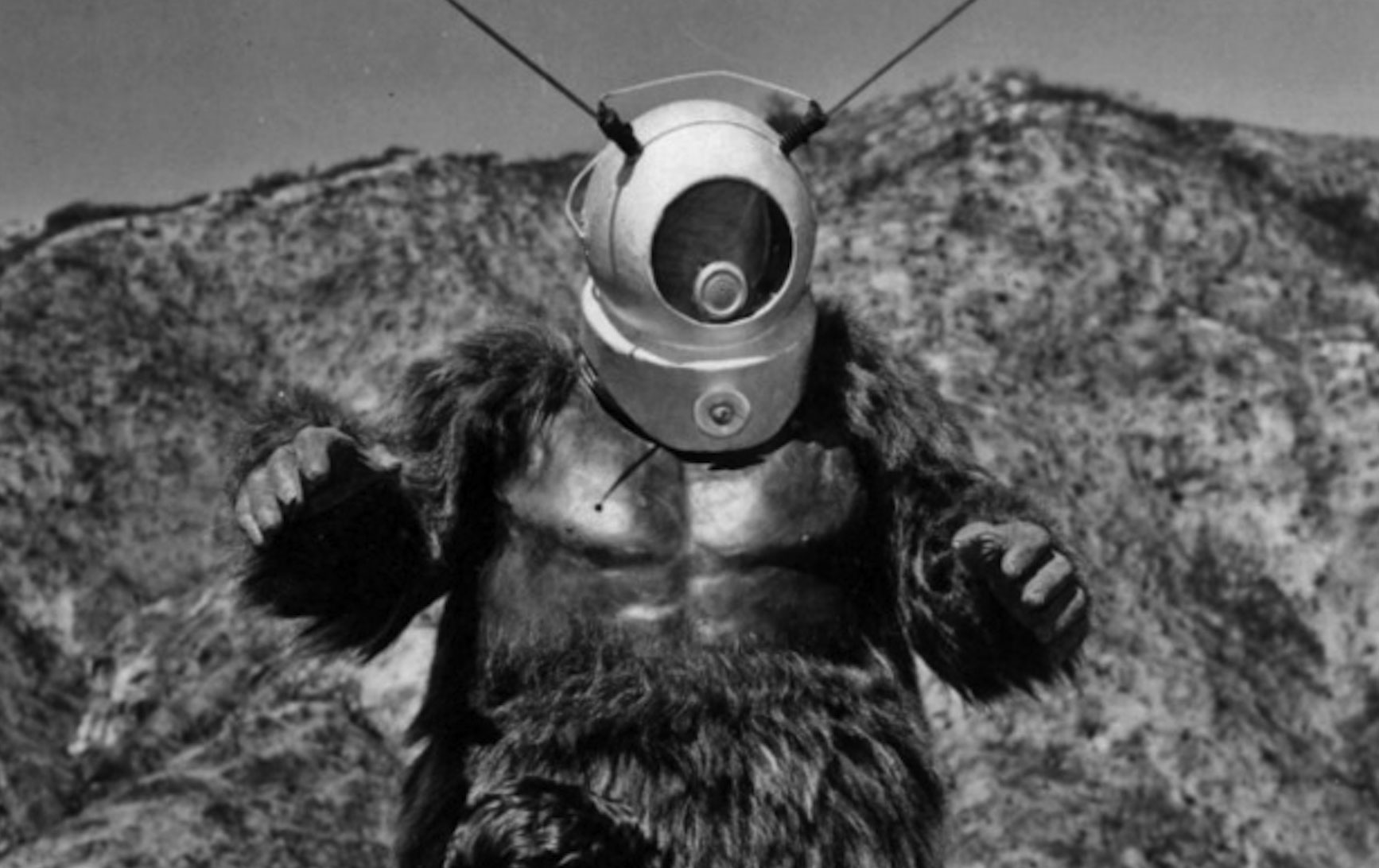 For those looking to further their education in science fiction (sf) and cult film, there’s no finer primer than the essay collection from Liverpool University Press, The Science Fiction Film as Cult Text. Originally published in hardcover in late 2015, the book will be released in paperback on Monday, March 1.

Edited by J.P. Telotte and Gerald Duchovnay, the collection of essays covers everything from ’50s sf to Ed Wood to crowdfunded films like Iron Sky. The deep dives into the relationship between cult and sf are done “by tracking the relationship between the cult film and the genre of science fiction (sf), exploring a connection that has always seemed closer, somehow even more natural—although some might find that term an ill fit for the cult experience which always seems intent on questioning what is ‘natural’—than in the case of most other film genres,” as stated by Telotte in his introduction.

I spoke with Telotte–Professor Emeritus in the School of Literature, Media, and Communication at Georgia Tech–via email about the book and the lasting appeal of cult film.

The Pitch: In your introduction, you use The Rocky Horror Picture Show opening song, “Science Fiction Double Feature” as your jumping-off point to discuss the reflexive nature of both cult and sf entertainment. That song name-checks quite a few classic and cult films. How do you see that litany of titles as influencing the viewing habits of filmgoers?

J.P. Telotte: The song “Science Fiction Double Feature” actually cites quite conventional and also well-known sf film titles (e.g., The Day the Earth Stood Still, Forbidden Planet) rather than films that typically fall into the cult category. In doing so, though, it reminds us that sf itself has, especially in the past, been linked to the cult or at least to cult attitudes. After all, it is only in the post-Star Wars/Close Encounters/Aliens period (remember that Rocky Horror appeared at a time, 1975, when sf was not yet cool) that sf has become the genre of choice for exploring major cultural concerns and articulating what sf enthusiasts like to term “big ideas.”

How did the book come together, and what led you and your fellow editor, Gerald Duchovnay, to select the writers you did?

The book came about as a result of my early interest in the cult film (see 1990’s The Cult Film Experience), my more recent focus on sf in various media, and my colleague Gerry Duchovnay’s teaching a graduate seminar on cult cinema. I was invited to his school to do a presentation on cult sf—which eventually became the Robot Monster essay published in the anthology—and from that point we discussed co-editing a book linking our sf and cult interests. Most of the contributors were specifically invited because they are prominent scholars, have special interests in the various categories into which the book is divided, and we had worked with them before (7 contributors have appeared in other volumes I’ve edited, while several have been published in Gerry’s professional journal Post Script: Essays in Film and the Humanities). In short, they are mostly people who are well known and who, we knew, do good work.

The majority of the films discussed in Science Fiction Double Feature are older than 30 years, and in many cases older than that. Why do you think so many older sf titles have found their way into the cult pantheon? Is it simply a case of so many more being produced in the ’50s and ’60s, or is there a stronger cultural aspect at work?

A suspicion I have is that we have become so culture-conscious and culture-bound, so concerned with the cultural implications or resonances of every text—if not every utterance—that we are losing the ability to find a dissonance in those texts, ways in which they can seem to speak almost accidentally about our world, our culture, to present us with the sort of strange yet revealing juxtapositions that have typically marked the cult text. My other sense is that distance—both temporal and cultural—contributes to the cult standing of a work.

Over the course of the book, the writers seem to consciously avoid discussing the Mystery Science Theater 3000 reaction to many of these films. Was this a conscious discussion that you recall, and what’s your view on how that program has affected how the greater public views many of the films analyzed within the book?

I don’t recall any discussions about Mystery Science Theater leading up to or being involved in the book. Certainly that show has dealt with many films that tend to fall into the sf/cult category, but it does so not by presenting them in a serious way, by treating them as actual cult works, but rather by mocking them, making jokes about how bad or simply silly they seem when viewed from a contemporary perspective. Cultists aren’t about making fun of things they love/like. This is simply the wrong attitude, one that most of our contributors wouldn’t embrace. Instead, we might argue that a film viewed in the “so-bad-it-is-good” category—e.g., Robot Monster or Bride of the Monster—might function like minimalist art, in the way it exposes essential elements of a film genre, of the film-making process, or of the culture in a particular period. Weak narratives, after all, can tell us much about narrative and how it works on us.

In this context we might also note how Jeffrey Weinstock discusses the “seriously silly” cult film, a type that chooses to talk about serious cultural concerns in what he terms a “silly” manner, but also as a way of opening up subjects for discussion that audiences might not immediately gravitate to—as in films like Space Truckers and Bubba Ho-tep. Their surface silliness becomes a kind of intriguing and effective discursive strategy. 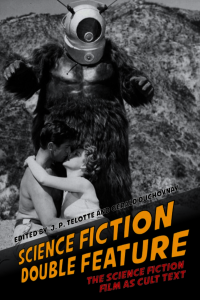 Given that Robot Monster‘s Ro-Man graces the cover and your own essay, “Robot Monster and the ‘Watchable … Terrible’ Cult-SF Film” focuses on it, I’m curious as to your relationship with the film and how it’s affected how you view sf as a whole.

I have no special relationship to Robot Monster; certainly, it’s not a film I go back to and might almost compulsively rewatch. However, it is one that very effectively reminded me of many of the fundamental elements of the cult/sf relationship. It is, for example, with its emphasis on screens and viewing devices, highly reflexive like most sf, thereby producing the sort of generic self-consciousness that cult texts and sf films tend to share. It creates some very strange visual juxtapositions—see the title character who is played by an actor in a gorilla suit wearing a diving helmet—even stranger than most aliens and strange figures seen in sf, but such weird or just unexpected juxtapositions or paradoxes (gorilla as robot?) are often the lifeblood of a cult work.

It also posits a very different world. Science fiction invariably evokes such difference, fundamentally through the sort of “what if . . .” questions it typically asks, while cult works are ones that stake a claim on difference and often suggest that difference is valuable. This film simply helped me recognize that sf is often propelled by the same attitudes that produce cult works—and that the values of both are often quite similar.

Looking back on the book and considering the last five years of entertainment, what recent films would you see as worthy of inclusion and discussion?

As for contemporary films, I’m not sure we can tell what will have a cult following in the future, since (as I note above) distance and detachment seem essential to their emergence, but let me speculate on a few nominees, all international productions:

Enthiran (2010) Indian film (the most expensive to that time). Its robots and robot conflict are so excessive, so over-the-top that it suggests a self-conscious, almost absurd vision of the mechanical threat. While not perceived as cultish in its native culture, when seen from outside of that culture, it provides the sort of detachment that, I argue, is consistent with many sf cult films.

Melancholia (2011) Danish/European production. Its critical awards might play against its cult status, but the film’s minimalist treatment of an apocalyptic situation, Earth about to be hit by another planet, creates the sort of strange juxtapositions often found in the cult—here the absolutely ordinary, even trivial, and the most momentous event in human history, one that promises to fully trivialize all of human history.

Colossal (2016) a comic sf film that also channels Godzilla films. The absurd situation, of drunken characters inexplicably able to manifest giant monsters and having them fight battles in the middle of Seoul, seems to play out a central attraction of many cult films, i.e., their representation of a strange otherness that speaks to an already alienated or searching audience—i.e., the sort of audience that is crucial to the cult experience and that accepts the violations of logic and/or reality in the films.

And here are a couple of runners-up with no explanation, just a hunch given the way they resonate in many different registers: High Life (2018) and The Lobster (2015).