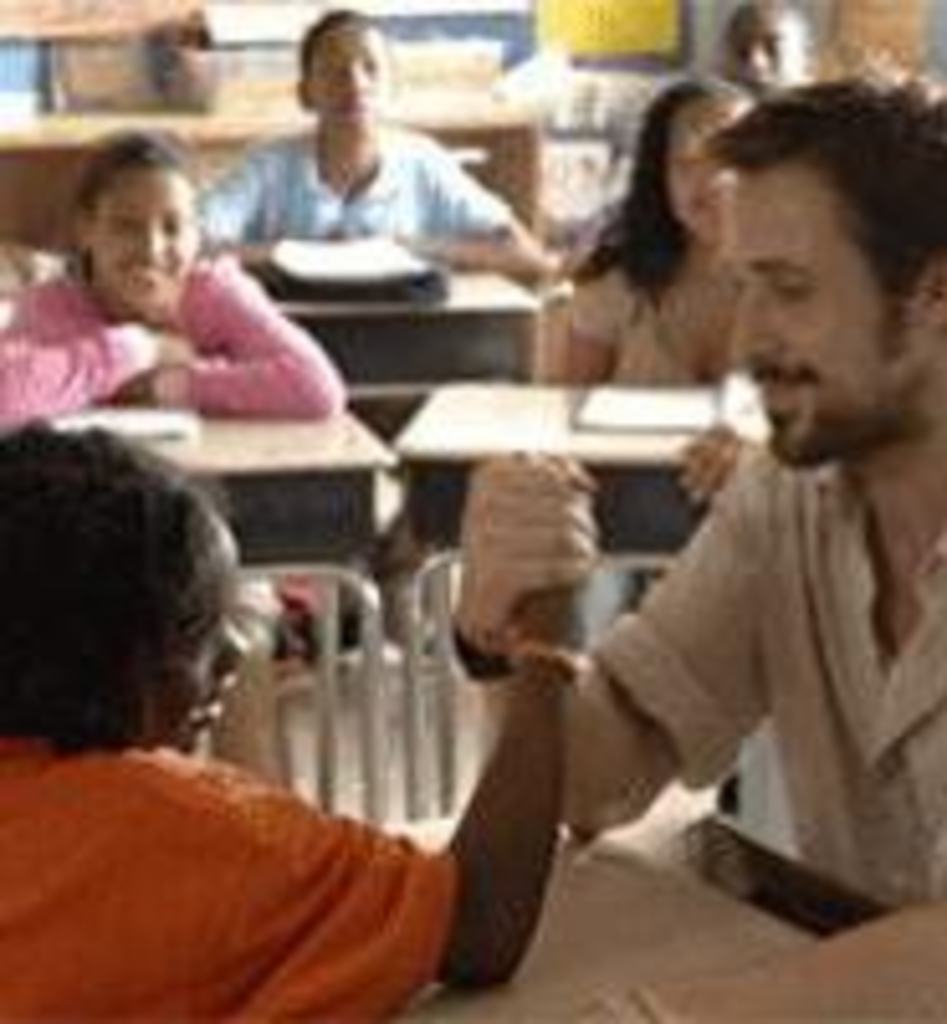 Even curriculum clutchers might rather leave a child behind than let her learn from Half Nelson‘s Mr. Dunne (Ryan Gosling), a Brooklyn junior high teacher whose off-the-cuff history lessons are based — brace yourselves, Bushies — on dialectical theory. History is change, and change, the white teacher tells the kids, most of whom are black, is the result of opposing forces. To illustrate, Dunne playfully arm-wrestles one of his 13-year-olds — and wins, despite the greater pull of the teacher’s own wearying addiction to crack cocaine.

Unawarded at Sundance despite ample acclaim, Half Nelson drags the crowd-pleasing white-teacher-inspires-black-students movie to the mat and pins the flabby genre in the first round. “What can I teach them?” Gosling’s Dunne wonders aloud in the bar after school — as well he might, given that the often hungover lefty intellectual, called daily to stand and deliver, isn’t exactly the image of stability. Neither is he an entirely plausible protagonist, but as Dunne likes to employ metaphor in the classroom, so first-time feature maker Ryan Fleck instructs us to see his wannabe-activist basehead as a symbol of American do-gooding gone bad.

Fleck, who co-wrote the script with Anna Boden between the anti-war rallies they attended in New York, dares to bend the uplifting melodrama’s narrative arc until it points sideways. Who knows whether any of us can make a difference these days? Fleck’s handheld camera first catches Dan slumped on the floor of his unkempt apartment, the teacher bleary-eyed and wired even before his alarm clock rings at dawn. “Change moves in spirals, not circles,” the strung-out dialectician tells his young students at one point, clearly spiraling down.

The audacity of making an inner-city drama in which the white-male authority figure is the crackhead finds its equal in Gosling’s performance, a high-wire act that’s gutsiest for its unconscionable charm. In a single shot some 15 minutes into the movie, Gosling does more than answer the question of whether an actor can humanize a drug-addicted teacher whose student has just caught him cowering in a bathroom stall, reeling from a crack hit: Gosling’s wide-eyed look of fear is exaggerated just enough to show us that the addict is acting, too — affecting pathetic vulnerability and a faint hint of sheepishness about the act. No wonder Drey (Shareeka Epps), watching Teach quiver atop a toilet seat (Epps’ deadpan reaction is a stunner), decides to take mercy on the man, wiping his brow and proving that opposite forces can also unite — in theory, anyway.

Fleck and Boden, whose documentary Young Rebels examined hip-hop in Havana, guard well against the intrusion of anything that feels like Hollywood, shooting in the fly-on-the-wall style of a vérité doc. Tutelage takes many forms here, but among the movie’s tough lessons is that, for better or worse, we’re all connected — child and parent, student and teacher, peddler and user.

Authority, in and out of the classroom, is expected to have answers. Half Nelson, tentative even in its title, is more than honest enough to settle for genuine uncertainty. It asks whether genuine uncertainty — the vague sense that modern life is too complicated to address or even understand — is going to cut it as the world burns. Gosling’s second tour de force moment in the film comes when the crackhead teacher, midway through telling Drey’s drug-dealing surrogate dad (Anthony Mackie) that the girl needs more positive role models, gets a glimpse of his own privileged hypocrisy and starts acting doubtful. “I don’t know, I don’t know,” the teacher says, throwing his arms aloft. Half Nelson is named for the wrestling move by which an opponent’s own strengths are used against him. Dunne’s strength as a teacher is his weakness — as well as a metaphor.