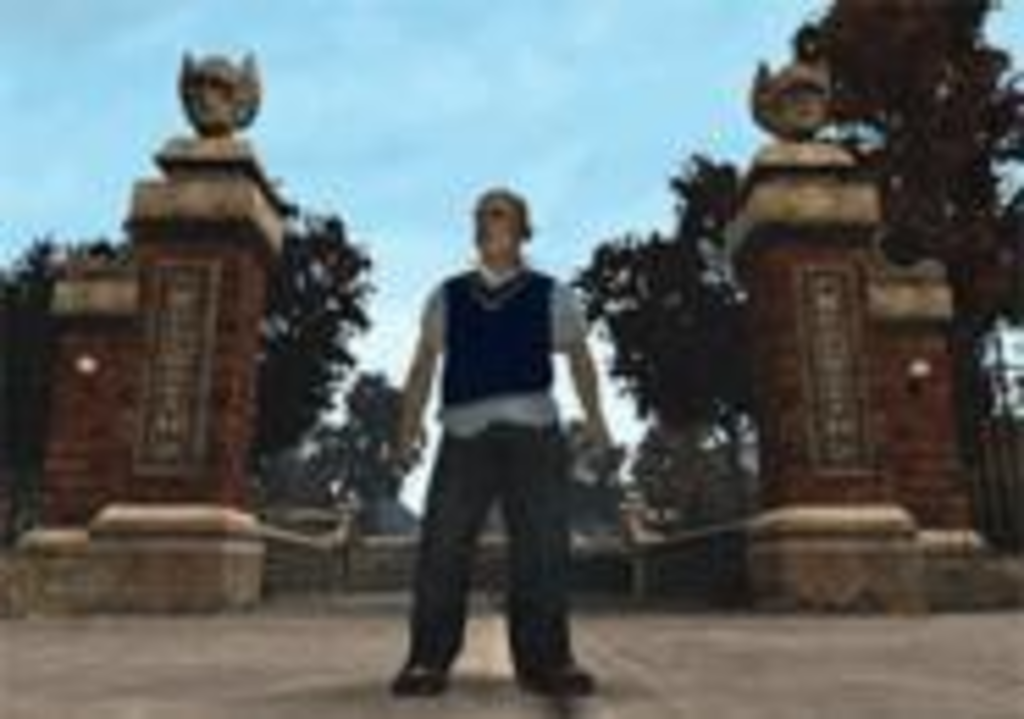 By now, you’ve probably heard about Bully. It’s the game that was supposed to finally ruin America’s youth.

Crusading lawyer Jack Thompson, the self-appointed schoolmarm of the videogame industry, called it a “Columbine simulator” and tried to block stores from selling it. Lou Dobbs — who hasn’t seen a videogame he liked since Galaga — labeled Bully an example of “our culture in decline.”

But it turns out the most shocking thing about Bully is that it isn’t shocking at all. There’s no blood or killing. No assault rifles. The most dangerous weapon you can use is a potato gun. Bully is full of harmless pranks, like panty raids in the girls’ dorm. Instead of picking on weaker kids, you end up protecting them.

At its heart, Bully is a morality tale. It’s the story of Jimmy Hopkins, a red-haired delinquent with a soft spot for losers, geeks, and anyone who’s ever been on the receiving end of an atomic wedgie.

The story begins when Jimmy arrives at Bullworth Academy, the latest stop in his checkered academic career. A pug-ugly tough, Jimmy has been kicked out of every school he’s attended, but he’s never seen anything like Bullworth.

The school is Lord of the Flies meets Andover. Although beefy-shouldered prefects patrol the hallways, there are too few to maintain order. And crooked teachers are too busy scheming against each another to impose discipline.

It’s up to Jimmy to bring Bullworth to heel. But it won’t be easy. As the new kid, he’s a target from day one. The bullies welcome him with a beatdown.

The bullies also torment the nerds, who hole up in the library, where they devise elaborate revenge scenarios when they’re not playing Dungeons & Dragons. The townies, a white-trash gang, live in a trailer park off campus and hate the preppies, a sweater-vested clique that condescends to the non-rich.

But it’s the steroidal jocks who pose the greatest threat. Lumbering brutes who barely speak in full sentences, they pack a wallop. Jimmy must avoid them until he boosts his fighting skills through training sessions with a homeless Vietnam vet.

Bully‘s combat system is simple but effective. As you learn new punch-and-kick combos, you inflict increasing damage. By the end of the game, you’ll be able to drop even the meanest jocks with roundhouse kicks and overhand haymakers.

As the game progresses, Jimmy must win over all the cliques. When a local greaser thinks his girl is cheating, he commissions Jimmy to photograph her in the act. When a fat nerd needs to go to the bathroom, he’ll ask Jimmy to escort him and offer protection. Complete these tasks and you gain respect, which unlocks new weapons, like a sniper slingshot.

There’s also class to worry about. If Jimmy doesn’t show up on time, the prefects will nab him for truancy. But there’s another reason to hit the books: You actually learn something that helps in the game. English class teaches you how to talk your way out of fights. Chemistry instructs you how to make stinkbombs and other handy weapons.

Whether you pass or fail is determined by your performance in mini-games. Some are fun, like the two-minute word scramble in English class. Others are rote, like the mindless button-pushing in chemistry.

When the final bell rings, Bully rewards altruism and punishes assholes. You can’t help but feel Rockstar decided to give Jack Thompson and his ilk a wet willie.