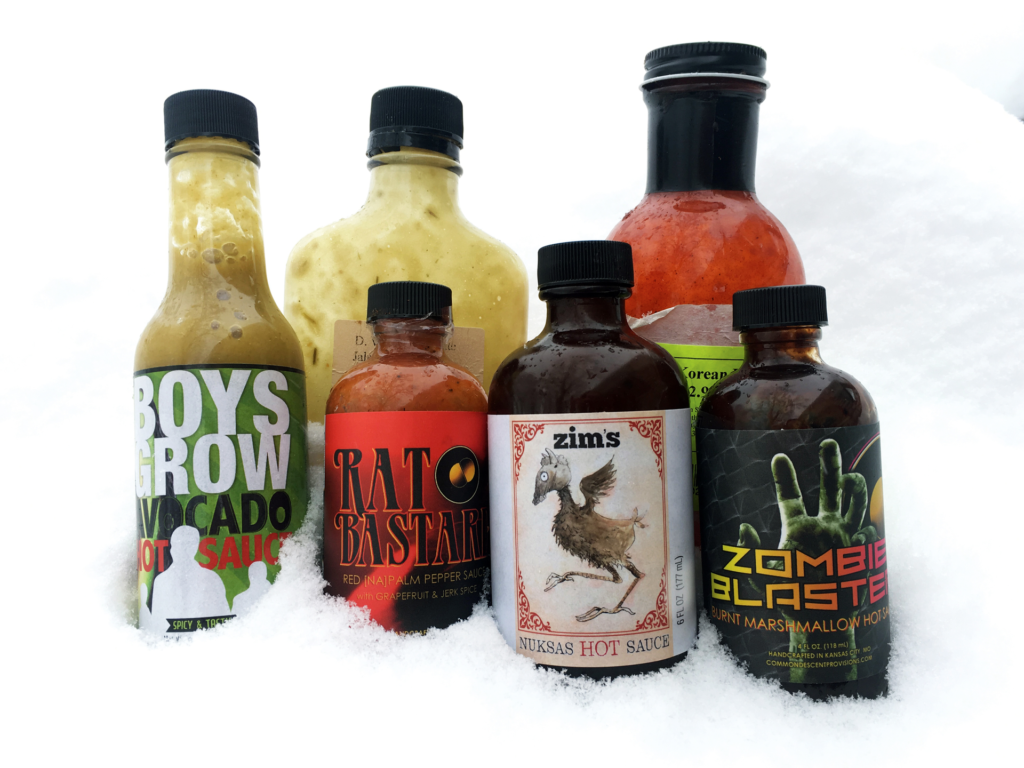 Valentine’s Day gifts, particularly if you’re in a new relationship, can be a minefield. Flowers and chocolates seem a little impersonal (and a lot cliché). But grand gestures and heartfelt homemade crafts can backfire, too. Ever been held hostage while a nascent boyfriend tried to play you a Ryan Cabrera song on guitar?

You say it best when you say it with capsaicin. The pain from hot sauce inspires your brain to release feel-good endorphins. It’s like negging, only without the misogyny! Plus, the hot sauce bouquet still invites plenty of cringe-y Valentine’s Dad puns. For your consideration: “Hey, hot stuff.” “For my saucy sweetheart.” “Are you a scorpion pepper? Because you’re tearing up my insides.” We’ll stop there.

If you’ve got a hot sauce fanatic in your life, the best gift is something they haven’t tried before. Which means: step away from the Marie Sharps and Tabascos in the grocery store aisle and slip into something a little more local. Whether you’re buying for a significant other or engaging in some solo saucing, these five local options are a great way to round out your blazing bouquet.

My pantry is a graveyard of novelty sauces. I can’t resist buying dessert hot sauces only to invariably end up disappointed when they taste more like dessert than hot sauce. But Common Descent Provisions has finally gotten the balance right with Zombie Blaster, a slightly sweet “burnt marshmallow” sauce that doesn’t shortchange heat. The sauce pours a molasses brown with char-black freckles, and the spice (courtesy of dehydrated Thai chiles) lingers on the lips and the tip of the tongue. The burnt sugar flavor shines through, but the sauce isn’t overly bitter. In fact, it’s surprisingly versatile thanks to a base of tomato puree, vinegar, and garlic. Use it anywhere you’d use Huy Fuong’s Sriracha, which is no less sweet. Pro tip: Zombie Blaster is especially good at waking up a sad frozen pizza.

Roeland Park-based Zim’s makes different heat levels of its signature sauce, but for my money, Nuksas is the best balance of flavor and fire. This is buffalo sauce in barbecue cosplay: it comes in a chubby brown glass bottle, lists molasses as the third ingredient, and pours the rust-brown color of a well-spiced brisket. Although the sauce has a rounder, mellower tang from apple cider vinegar, the heat is still the main event, with a slowly building back-of-the-throat burn. A savory kick of Parmesan cheese funks up the sweet notes like jazz. I suspect this would make a hell of a wing sauce, but I never seem to have enough left in the bottle to test the hypothesis.

Find it: Made in Kansas City, Nature’s Own, McGonigle’s

When I started taste-testing sauces, I was committed to choosing five different purveyors for #balance. But a fair accounting isn’t always balanced, which is why Common Descent is taking up two of the slots on this list. Rat Bastard is an all-purpose workhorse, with a clean, habanero-forward heat and a bright citrus profile from grapefruit concentrate. Jerk seasoning adds warmth and complexity to the sauce without overpowering the other flavors, and lemongrass lends a subtle fragrance. Although the sauce includes ghost chili pepper, you don’t need a scorched palate to appreciate it. On the oven dial of spice, this one’s somewhere between medium and medium-high. Fringe bonus: Common Descent’s labels, designed by founder and saucier Chris Bengston, are comic-strip colorful and look great on the (refrigerator) shelf.

Find it: The Bunker, commondescentprovisions.com

I can think of plenty of reasons to support Boys Grow, a local organization that mentors young men and provides hands-on experience in agriculture, cooking, marketing and design. But the tastiest one might be the avocado hot sauce engineered by the Boys Grow class of 2014. The smooth, medium-bodied sauce is a little nutty and a little sour, with a generous splash of lime and salt. The creamy avocado sands off some of the jalapeño bite — as hot sauces go, this one’s fairly mild. The upside is that you can drown your food in it without sweating off your mascara. Pour this on eggs and tacos or tip it into your pozole. A, um, friend tells me it’s also great sprinkled liberally on the broken tortilla chips in the bottom of the bag.

Find it: The Sundry, Nature’s Own, McGonigle’s

This pick feels like cheating, since it’s not technically a single sauce. But if you’re a fan of flavor, you owe it to yourself to visit the Original Juan’s factory outlet store on Southwest Boulevard at least once. The sauce-to-dollar ratio here is obscene. In addition to blending and bottling sauces for local and national brands, Original Juan’s has an onsite test kitchen where a research and development manager and a full-time chef experiment with sample batches. The test-kitchen sauces aren’t going to win any awards for packaging design, but they’re an inexpensive way to taste new and experimental flavor combinations. Recent highlights include a white-chocolate jalapeño hot sauce (creamy, zesty, thick) and a Korean-style barbecue sauce brimming with spicy gochujang and earthy, fermented flavors. The offerings are constantly rotating (and never available for long), so keep checking in until you find something you love.