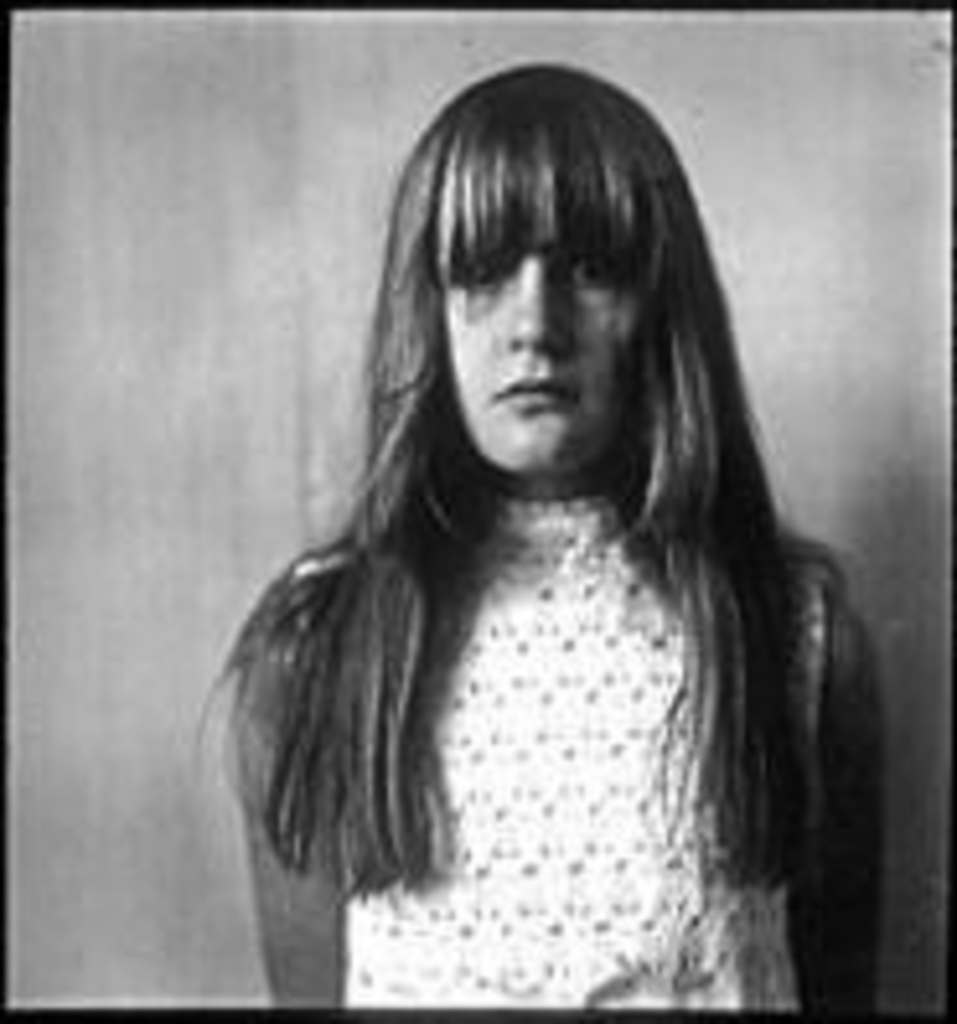 There’s no photography exhibit so enthralling as an ordinary family album.

When Diane Arbus — whose Family Albums is on display at the Spencer Museum in Lawrence through January 16 — photographed a family of sharecroppers on their lopsided front porch, she recognized how difficult it must have been for them to pose for a family photo that all might see. That much is evident in the title she gave the resulting piece: “Sharecroppers Prepare to Have Their Pictures Taken.” Wearing dirty, scraggly dresses, the two muscular young women in the family slick back their hair, aware of their looks. It’s a humbling image of self-respect meeting self-consciousness.

One whole wall of the exhibit is dedicated to commissioned family portraits Arbus made at the Matthaei family reunion in 1969. A teenage daughter’s bangs fall across her eyes, and her white knee socks draw attention to the bowing of her legs. She stares, unsmiling, at the camera, not yet as schooled as her beautiful mother in what one does during a portrait session.

Given the myriad “awkward phases” in every family’s life, it usually takes an estate sale to bring family albums into public view. The photos then tend to travel from the estate sale to the antique mall and from the antique mall to the art school for a kitschy project — a trajectory that brings to mind the phrase You’ll have to pry it from my cold, dead hands.

On Christmas night, I hoped to witness the unfathomable: the worst family photos unearthed from the private albums of friends, acquaintances and strangers, exposed before my very eyes at Chez Charlie’s Fucked-Up Family Photo Contest. The private world of the family album would open itself for the enjoyment of ruddy-cheeked drunken (Christ)masses, unveiling the most guarded photos locked away in this private world.

More dangerous than a dirty photo, dear reader, is a bad photo. On that, you can take my word. Your parents will never up and show a dirty photo of you to a new boyfriend on his first visit to the family home. Not so a picture documenting your ill-advised stint as a nerdy cheerleader in ninth grade.

Coordinated by architect, bartender and trumpeter Bobby “DuSoul” Asher, the event was supposed to consist of an unruly bunch of regulars voting by mob rule on the most fucked-up of these fucked-up family photos. The winner would get free drinks for the rest of the night as well as the dubious honor of having his or her photo deemed most jacked.

The advantage to everyone bringing a photo should have been that — the winner notwithstanding — bargoers would find that everyone had once had a mullet or at least engaged in serious bang-teasing activities. Several cans of cheap beer later, these fucked-up family photos wouldn’t seem so fucked-up after all.

The disadvantage was that somebody was going to “win.” On the one hand, winning would result in free drinks. On the other hand, one unlucky soul would have his or her unphotogenic childhood publicly confirmed as somehow more visibly whack than everyone else’s.

If you have a family like mine, you recognize this as a serious possibility.

Subconsciously, this might be why, at the last minute, I backed out of bringing my own photos. Consciously, the reason was less psychologically complex: I forgot.

Still, I was disappointed that I wasn’t the only one who either forgot or just plain chickened out. When I arrived at my favorite dive at around 11 p.m. on December 25, only one photo was on display. It wasn’t tacked to the wall as promised; rather, it sat framed on a chair behind the jazz ensemble known as the Creighton Organization.

When the band took a break, allowing DJs Fat Sal and Superwolf to take their turn at rocking the yule vibe, I inched my way over to get a good look. My friend Chris went with me.

“That’s Renee,” she said, pointing to the scrawny, feathery-haired predecessor to a woman now tall, elegant and bespectacled — the all-around classy Mrs. Asher, wife of the very bartender who had organized the event. Then Chris pointed to the other people in the photo. “That’s her younger brother. And that’s her older brother.”

The older brother is clearly the main attraction. Asher admits this. “My older brother’s definitely the creepiest,” she says. “But at the time, he was considered really good-looking. My friends were all like, ‘Your brother’s hot!'”

What’s wrong with her brother? Nothing really. Just that he participated in that brief trend of hair-dryer use among men. He looked ready for a dance-off.

In this photo, Renee wears a curious necklace. It’s an old-fashioned key dangling from her neck by a chain. And so it was that the only soul brave enough to put up an embarrassing portrait for ridicule was asked, throughout the night, “What was that key for?” The answer: nothing. “I just thought it was cool,” Renee confides later.

As if to make Renee feel better, one person after another approached her to tell her about the photos they were going to bring but for one reason or another did not. The running theme regarding the almost-brought photos was siblings dressed in matching outfits. Now, I’d like to take this opportunity to state that if matching sweaters are the most fucked-up attraction of your family album, then you don’t know from fucked-up. Some of us have toy-gun-wielding vigilante brothers posing against blinding mirrored wallpaper. And that’s not the half of it.

One woman reported that, back home, she had some of her family’s attempts to take “arty” family portraits — you know, black-and-white action shots of kids running across a field, frozen, euphoric, in midstride.

At the end of the night, deciding between hippy family portraits and creepy, Shining-esque matching outfits would have been like comparing apples and kumquats. The presence of only one contestant made judging easier, if less brawl-inspiring.

Truth be told, we’re lucky there were any contestants at all. Renee wasn’t too keen on bringing this photo to the bar in the first place. Resigned was more like it. “It’s hard to find the energy to search for a really embarrassing photo to bring in for all to see,” she says in retrospect.

In fact, it was Asher who picked this one out, with the eager help of his wife’s mischievous younger brother. At his in-laws’ house on Christmas Day, Asher mentioned the event at Chez Charlie and enlisted the help of his wife’s entire family. Her brother was most eager to plot the embarrassment of his sister, the only member of the family who would actually be at the bar to witness people’s reactions. He ran upstairs to grab the albums.

With all those albums of embarrassing moments at his disposal, Asher candidly explains the logic behind his desire to bring in this particular photo. “Flock of Seagulls, yo,” he says, referring to the family’s collective hairstyle.

Let’s all drink to Renee, for she is truly braver than us all.