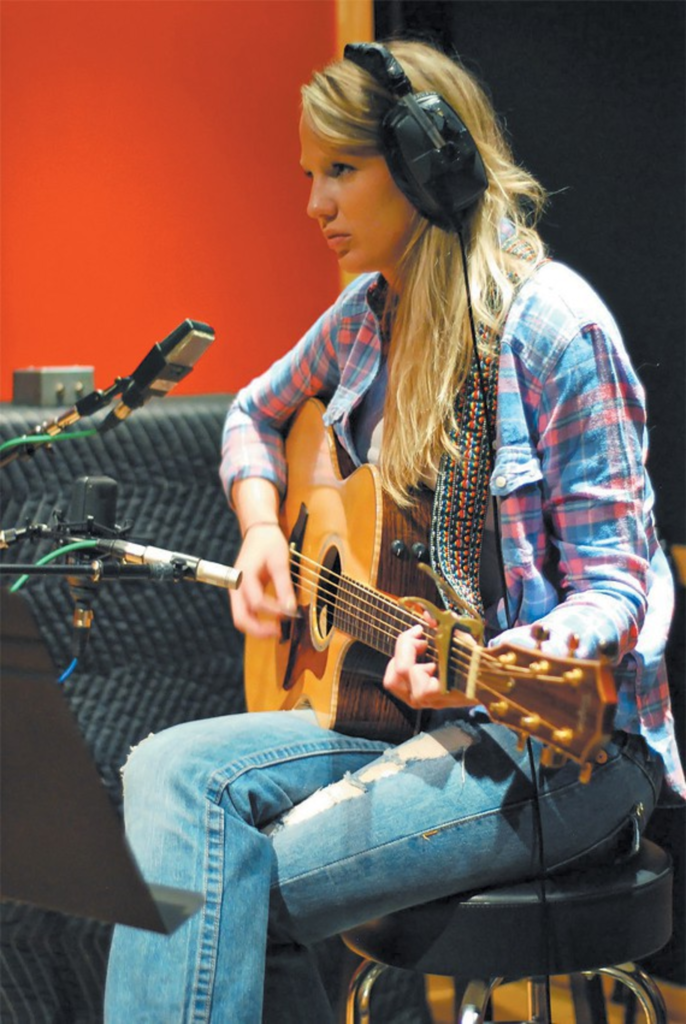 Sara Morgan is about as country as it gets – something she is unabashedly proud of on her latest EP, Easy to Dream, out today. The 25-year-old Arkansas native says she has found an unlikely support system and an audience for her music in Kansas City, and despite her pining for some famed Nashville stages – namely the Grand Ole Opry – she’s come to regard KC as her home.

We dialed up Morgan to chat about her new release and being comfortable with standing out.

The Pitch: This is the first release from you since October 2013. Tell me a little about the album.

It kind of started with this song I wrote a year and a half or two years ago, “One Night at the Opry.” I wrote it and just kind of shelved it, and then I played it one night [at a show] because I ran out of songs, and I didn’t want to play any more covers. And it went over really well, people responded really well to it, and they kind of have since. And so I said, “All right, I’ll record it,” and then it turned into this full-blown project that I hadn’t really planned on doing. I did a Kickstarter for it, and it ended up being funded in 10 days.

It’s a country album, but it doesn’t sound like what’s on the radio. There are sounds from the ’60s and ’70s on it. I tried to match it with a modern writing style. People are always like, “I want traditional country!” But if I write that, I’ll be a copycat. So I’m trying to find a way to make it [the old sounds] new again.

So “One Night at the Opry” is an old song, then. What about the rest of the album? Timeline things out a bit for me.

I guess I wrote that song about two years ago and shelved it – I do that with music everyday, I write a song and I throw it away – and I’ve written a lot of material between now and then. The other five songs have been written in the last year, and I chose them based on concept. I really love the song “Easy to Dream,” which is actually [Rainmakers guitarist] Jeff Porter’s song. I didn’t know how to pull my other songs together, and Jeff was like, “Well, you can have one of my songs if you want.” And that was perfect, because I really want to cover other people’s music from time to time, because there are other great songwriters out there. So I picked that song six months ago. It was one of the last songs to be added.

Your sound is definitely very, very country. Do you feel that Easy to Dream is a good representation of you as an artist?

Yeah, I mean, this is one of those things where I kind of got into the scene as a folk and Americana artist here, and that’s not really what I am, I don’t think. I want to release country music, and I think I did more of that on this release, and I think it’s a step toward where I would like to go. Ultimately I would like to – I don’t know how to say this without sounding weird – but I’d like to be legitimate in the country music world. So I think, right now, this is representative of what I want to do, and it’s a small shot at the mainstream. I think it’s a good representation of where I am right now.

It’s not the norm around here. We have a lot of blues, a lot of folk, a lot of country-flavored sounds, but your music definitely sounds like it’s ready for popular country radio. I think it might be hard to find an audience locally sometimes.

[Laughs.] I know! I’m always so nervous every time we play a show, like, “What if no one comes?” I’m always overwhelmed that people show up. There’s always people there, and it’s the weirdest thing. I know that there’s not a lot of this going on [here], and I’m wondering if that’s why we’re finding an audience and people show up. I don’t know why.

We’re looking to start touring in the next six months to a year, and I would like to be based out of here. My goal with my music and what I’m doing is to show that Kansas City is a place where musicians are welcome, that if you’re willing to work, you can do well here. I want people to see that, and if I leave, that doesn’t help my cause. And in general, I came here and things started working out very well for me, and I’ve been so welcome here.

Easy to Dream is out today, you can buy it here. Sara Morgan is playing PorchFest KC this weekend and Boulevardia next weekend.

See also:
Sara Morgan’s new country has old-fashioned roots
Local singer Sara Morgan’s cover of ‘Royals’ should get you in the mood for tonight’s game