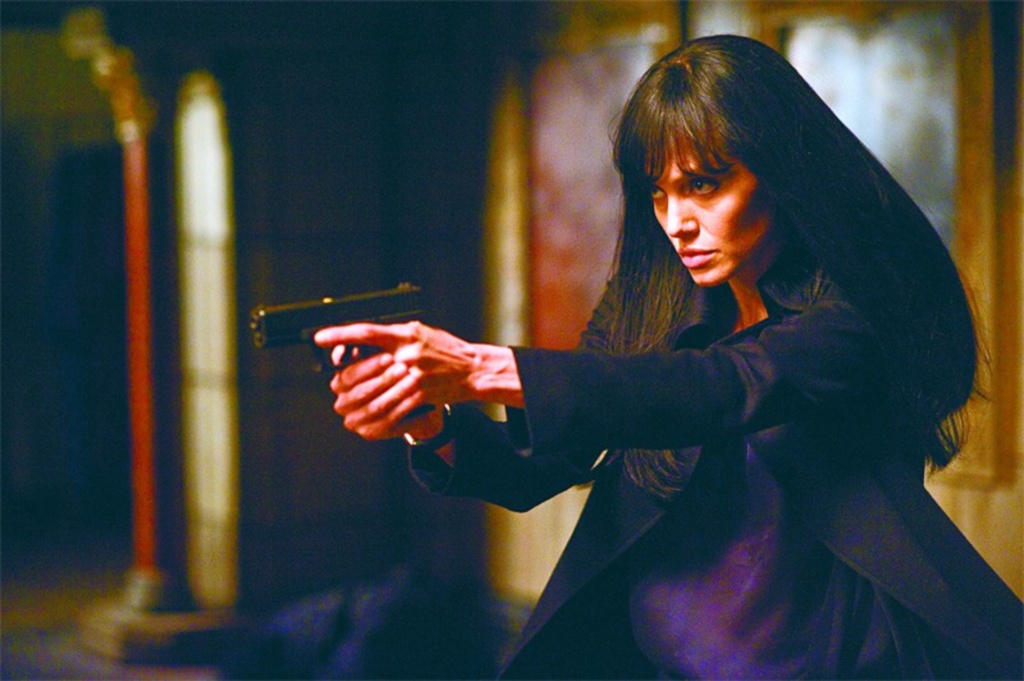 Salt, famously The Spy Flick Rewritten for Angelina Jolie After Tom Cruise Dropped Out, has been publicized as the cinematic equivalent of the 19th Amendment: finally, a level playing field for female action stars.

This is mostly bullshit, of course — Jolie’s Evelyn Salt is not the first action hero to be given a gender reassignment between initial conception and opening weekend (cough, Alien), and this isn’t the first stunt-heavy film that Jolie carried on her back and sold on her name.

What is startling about Salt is the extent to which it gives us an action-hero prototype — morally ambiguous — that Jolie was born to play and Cruise couldn’t.

Ambiguity is something Cruise just doesn’t do. Maybe that’s why, for 30 years, haters and fans have devoted so much energy to speculating about his supposed secret sex life. But Jolie is all about ambiguity and always has been. She’s an Oscar winner and an action star, a husband-stealing, tattooed pinup and an orphan-adopting mom of six.

In the first scene of Salt, she’s tortured by North Korean prison guards while wearing a bra and panties, her long locks stained with blood like a vixen from an exploitation flick. From the start, this character plays to the star’s strengths, merging subject and object, warrior and victim, ass kicker and damsel in distress.

And hero and villain. A trusted member of a CIA team led by Ted Winter (Liev Schreiber), Salt is outed as a Russian double agent by Orlov (Daniel Olbrychski), her supposed comrade, who essentially just strolls into a covert CIA outpost and accuses her of treason. Salt’s colleagues, taking Orlov at his word, slip into ’70s-film paranoia mode and initiate an all-hands manhunt; Salt runs, managing to stay a step ahead of the feds and several steps ahead of the audience, all the while laying waste to dozens on either side of the apparent with-us/against-us divide.

Early on, Salt starts acting like “the bad guy,” and screenwriter Kurt Wimmer and director Phillip Noyce are in no hurry to clear up the matter of their protagonist’s true allegiance. The filmmakers imbue what at first seem to be rote-action devices with unexpected psychological gravitas. Not until the final scene does Salt unambiguously spell out how we’re meant to feel about all that has come before.

If Jolie’s star persona has something to do with Salt‘s muddling of moral binaries, her gender inspires little in the way of action-hero subversion. The filmmakers are not above condescendingly winking at the notion of feminine wiles. When she needs to hide from a security camera, she removes her panties and tosses them over the lens; when she needs to improvise a weapon, she concocts an explosive out of everyday items that any gal might find in her cleaning pantry and medicine cabinet. She may be invincible, but her number one ace in the hole seems to be that she can always convince smitten men that they can fuck her.

So let’s not give this gambit more credit than it deserves. Salt is not particularly progressive — politically or socially. Stylistically, the best that can be said is that Noyce elegantly mashes up post-Bourne shaky-cam P.O.V. with gilded bombast straight out of his own ’90s Jack Ryan films. Its conception of world affairs would seem hopelessly retrograde if the United States hadn’t hauled in a sleeper cell of Russian spies, like, last week.

That this is a would-be franchise launcher becomes clear when the first end title card interrupts Jolie mid-dash to what we presume would have been the final action set piece; it’s only at that moment that we understand we’ve been watching an origin story, a primer on who this antihero is and how she came to be the only thing standing in the way of the nuclear annihilation of Mecca (yes, seriously). That it flatters the audience by assuming a modicum of intelligence earns points if we’re grading on a curve, but this is still closer to product than art — highly satisfying, often exhilarating, refreshingly unpretentious product