Ryan Silvey can easily beat his challenger but wants to humiliate him, too 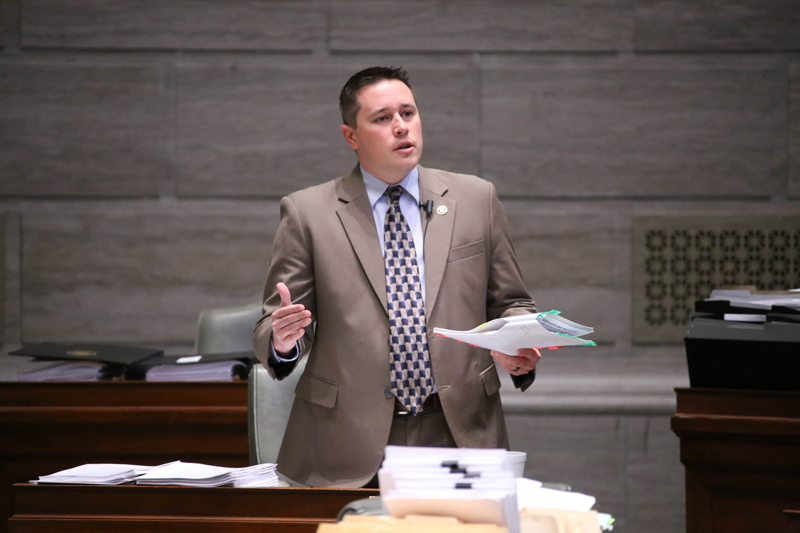 Ryan Silvey — in the final days of his last campaign for a seat in the Missouri General Assembly, owing to term limits — is pulling out all the stops.

The Republican state senator from Clay County spent big trying to knock his Democratic opponent out of the race by challenging his residency. Now, having lost that fight in court, Silvey has gone public with damaging information about his rival.

That opponent, 36-year-old J. Ranen Bechthold, does indeed have baggage.

The U.S. Army veteran, who returned from a stint in Afghanistan last year, was ordered by a court in 2004 to stay away from a former girlfriend, who accused him of threatening and harassing her after a breakup. He acknowledges making threats and says he was wrong. Bechthold’s Facebook feed — which apparently was infiltrated by a staffer from Axiom Strategies, Jeff Roe’s campaign firm, on Silvey’s behalf — is replete with strange and sexually charged posts. And some of Bechthold’s actions during the campaign — showing up at Silvey’s door unannounced, for instance — have teetered on creepiness.

Better instincts, or better advisers, might have warned Bechthold at the onset it would be this way. Silvey, a well-funded incumbent, has a taste for the jugular.

“I’ve learned a lot,” Bechthold tells me, sounding somewhat rueful. “I had the view that local politics is not corrupt like it is in D.C.”

But even friends of Silvey wonder why he is campaigning so ruthlessly against a neophyte opponent who lacks the money, the time or the knowledge to be a serious threat. Silvey has a war chest of more than $500,000, and he plans to spend almost half of that in the final weeks of his campaign. He’s already spent $44,000 on legal fees trying to prove that Bechthold doesn’t live in the 17th Senate district. (Bechthold is operating out of something more akin to a cheap lockbox: Records show that he only ever had about $26,000 to work with — with $25,000 coming from Joplin megadonor David Humphreys — holdings all but wiped out by the legal war with Silvey.)

“I don’t really have a history of slinging a lot of mud on people,” Silvey says. But he points out that, in this, the volatile year of Donald Trump, a Republican candidate can’t take anything for granted. So, after the furor over an audio recording that caught Trump boasting about assaulting women, Silvey says he decided to show reporters screen shots of Bechthold’s Facebook posts.

Compared with Trump’s priapic bluster — or the sex scandals that have torpedoed a couple of Missouri politicians since the last election — it’s fairly tame stuff.

In one post, the married father laments that men never know these days whether a woman is actually consenting to sex. In another, he takes a “leave the seat up or down” swipe at gender-neutral bathrooms. But mostly, the Silvey-curated feed shows that Bechthold’s interest in body parts and sexual practices isn’t threatening but dumbly juvenile. He’s more American Pie than Billy Bush.

So what exactly does Silvey want, and how far will he go to achieve whatever that is?

He has long been one of the area’s more enigmatic politicians: a Republican who has managed to hold a legislative seat in Democratic territory for 12 years, straddling the ideological fence adroitly enough to both placate and infuriate stalwarts from both parties. He’s fiercely ambitious but has taken stands — like advocating for Medicaid expansion — that will make it difficult to win a Republican primary for a Missouri statewide office.

Silvey says his immediate goal is to step up to the chairmanship of the Senate Appropriations Committee. Last session, he was second in command to Kurt Schaefer, whose attempts to use the powerful post to advance his political career backfired when he was trounced in the GOP primary for attorney general.

The appropriations chairman wields a great deal of control over how the state spends its money, and therefore breathes some of Jefferson City’s more rarefied air. Silvey served as the House budget chairman and earned bipartisan praise in that role. He is the logical choice to oversee the budget on the Senate side.

But Silvey has done more than perhaps any other Republican senator to piss off his party’s leadership. He wouldn’t vote to overturn Gov. Jay Nixon’s veto of an anti-union bill, saying his constituents were overwhelmingly opposed to the so-called right-to-work legislation. And he was one of three Republicans who voted against blocking a Democratic filibuster on Senate Joint Resolution 39, the deceptively named “religious freedom” measure that would have asked Missourians to enshrine discrimination against same-sex couples in the state constitution.

Silvey’s campaign is playing a radio ad that features the senator yelling at Ron Richard, the Senate president pro tem, in the heat of the procedural argument over the filibuster. “No offense to you Mr. President,” he says, “but you do not tell me how to vote. You did not elect me. The people of Clay County voted to elect me.”

That’s great campaign material for a district that wants an independent-minded senator, but perhaps not the best way to win Richard’s approval for the committee chairmanship.

Silvey says he’s not worried. “I’d like to think that my experience will carry the day,” he tells me. “If I don’t get it [the job], it will look pretty suspect to everyone.”

Others aren’t so sure. Democrats, especially, like to speculate that Silvey might be denied the coveted committee post — and would respond by going rogue on the Republican leadership.

That may be wishful thinking. With the notable exceptions of Medicaid expansion and the union legislation, Silvey usually hews close to his party’s conservative line. He’s been a reliable vote for extreme anti-abortion bills passed in recent years, and he voted in favor of the radical legislation this session that will enable Missourians to carry concealed weapons without training or a permit.

It’s significant that, while Silvey opposed ending the filibuster of SJR 39, he then voted in favor of the odious measure. His explanation for why he did so has the ring of a copout: While he personally opposed the discriminatory resolution, Silvey says, he thought the public should have a chance to see the issue on a ballot.

Fortunately for Silvey, bolder Republicans in the House stepped up to ward off the debacle of a statewide public vote to legalize discrimination in Missouri — an event that would have cost the state dearly in terms of lost business, sporting events and reputation. Otherwise, Silvey might have a lot more to answer for in this campaign season.

As it is, he enjoys endorsements from both business groups and unions. Which frees him up to pound on Bechthold, who says he earns $32,000 a year working for a security service and can’t afford to take much time off for forums and other campaign events.

Meanwhile, Silvey, who is 40, has been a full-time legislator and politician for the last 12 years — a luxury made possible in part by Missouri’s absence of limits on gifts and meals from lobbyists to lawmakers. Silvey usually ranks fairly high on the list of recipients. Before running for elected office, he was a legislative aide to U.S. Sen. Kit Bond and then worked as a home-finance and mortgage consultant.

Chances look good that Silvey will get to continue his political career for four more years. After that? Silvey seems to be without a concrete plan. He won’t run for an elected office, local or statewide, that doesn’t seem interesting, he says. Lobbying is a possibility, but he voted for the one-year cooling-off period that passed the Legislature this year.

Whatever Silvey decides his next move will be, he’ll pursue it with a vengeance, and woe be to anyone who gets in his way. Just ask Ranen Bechthold.