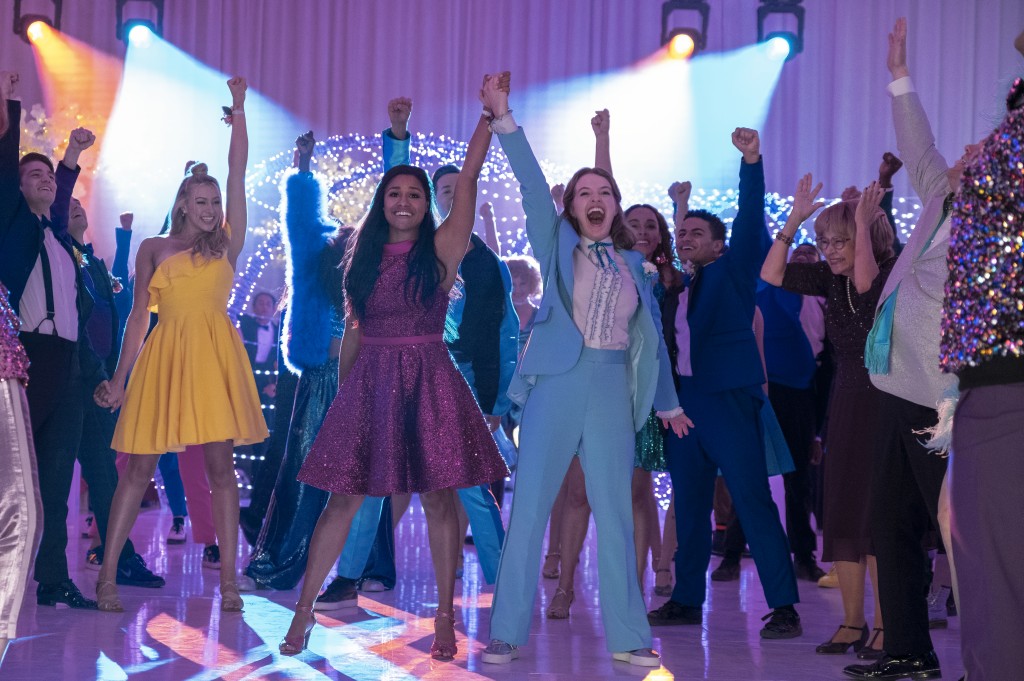 At the beginning of The Prom, four Broadway stars lament over the poor reviews that have sunk their latest show on opening night. They groan and flail in their seats at every critical scourge, but in their eyes, the Times have ruined the musical’s future with one scathing remark: it’s misguided. The same damning critique applies to Ryan Murphy’s latest Netflix venture, a film loaded with glossy schmaltz that ultimately struggles to stick the landing in regards to its self-congratulatory sermons about acceptance.

The Prom is based on the beloved 2018 Broadway show of the same name, which itself is based on the story of Constance McMillen, a lesbian high schooler who received viral support from several celebrities after getting barred from her Mississippi high school’s prom.

Now that Dee Dee and Barry’s new musical has flopped, they and their friends begin desperately scrolling Twitter in search of a charitable cause to boost their public personas. They land on the small town of Edgewater, Indiana, where the PTA have cancelled prom rather than allow the school’s only out lesbian student, Emma (Jo Ellen Pellman), to bring another girl as her date. To make matters even more complicated, Emma’s girlfriend Alyssa (Ariana DeBose) is the closeted, popular daughter of homophobic PTA president Mrs. Greene (Kerry Washington).

Just like in the Tony-nominated stage show, the theater stars’ self-centered crusade to help Emma forces them off their wobbly pedestals, as they and their red state counterparts actually manage to teach each other a thing or two. But while Murphy’s adaptation retains the catchy show tunes and splashy Casey Nicholaw choreography—which will be undoubtedly affecting for viewers craving live theater’s return—it’s missing the genuine spirit that made the original work.

The story starts off with a promising premise—although the Broadway vets have a condescending view of Edgewater’s citizens, each of them are just as deluded and out-of-touch as the cartoonishly homophobic folks to whom they preach. The trouble is that, although Murphy dedicates plenty of extra scenes to teasing out the theater caricatures that were slowly fleshed out onstage, the same can’t really be said for the Midwesterners themselves. By the time that act two kicks off, most of the Indiana characters are mostly used as launching pads for the New York quartet’s arcs, or are bigots who can unlearn their hatred over the course of a five-minute musical number. Even Emma, who’s supposed to drive the story’s inclusive messaging, is largely swept aside.

Then there’s the fact that, with the exception of Rannells, these Broadway stars are played by movie A-listers rather than actual theater pros. Streep lacks belting ability but puts in a pleasantly campy effort as Dee Dee, even if she never reaches Devil Wears Prada heights. In fact, her character comes most alive during her unlikely romance with a fan (Emma’s sympathetic principal, played gamely by Keegan-Michael Key). Kidman and Rannells are criminally underutilized, although Kidman manages to sell a “Zazz” number sheerly because she looks like she’s having the time of her life.

The real problem is Corden, who embraces just about every effeminate gay stereotype in the book while playing Barry. The character is meant to ground many of the story’s extended dramatic moments, with Barry emerging as a mentor for Emma after it’s revealed that his own youthful coming out cost him his family. But for a movie that shouts from the rooftops about celebrating queerness, tying so much of the narrative to a straight actor’s stereotypical impersonation of a gay man is offensive.

What time we do spend with Emma and her peers fares slightly better since Murphy’s over-the-top exuberance feels slightly more natural in a coming-of-age setting. Tony-nominated Hamilton discovery Debose brings genuine pain and catharsis to her portrayal of Alyssa, particularly in an all-too-short song that reveals just how much pressure comes with being the apple of her mother’s eye.

Unfortunately, the same can’t be said of Pellman, whose character is responsible for anchoring the entire show. Newcomer Pellman’s Emma is simply too unflappable—although she’s a shy, vulnerable teenager thrown into increasingly cruel situations, she never loses her wide-eyed theater kid smile. It’s charming, until it’s not—the push and pull between Emma and Alyssa, her hesitancy to let narcissistic Broadway strangers capitalize off of her identity, and her eventual reclamation of her own ripped-from-the-headlines story are all effectively watered down as a result.

That’s not to diminish the positive impact that The Prom will undoubtedly have on viewers around the world, especially young ones. For all the Murphy froth, it’s hard not to be moved imagining what watching swaths of queer teenagers arrive at an LGBTQ prom will mean to many people. For those of us eagerly waiting to lose ourselves at packed theater performances again, the infectious joy of watching high-budget musical numbers again after so long can’t be counted out, either. After months spent cooped up, however, you can’t help but wish this party invite was better.