Run, Do Not Crawl 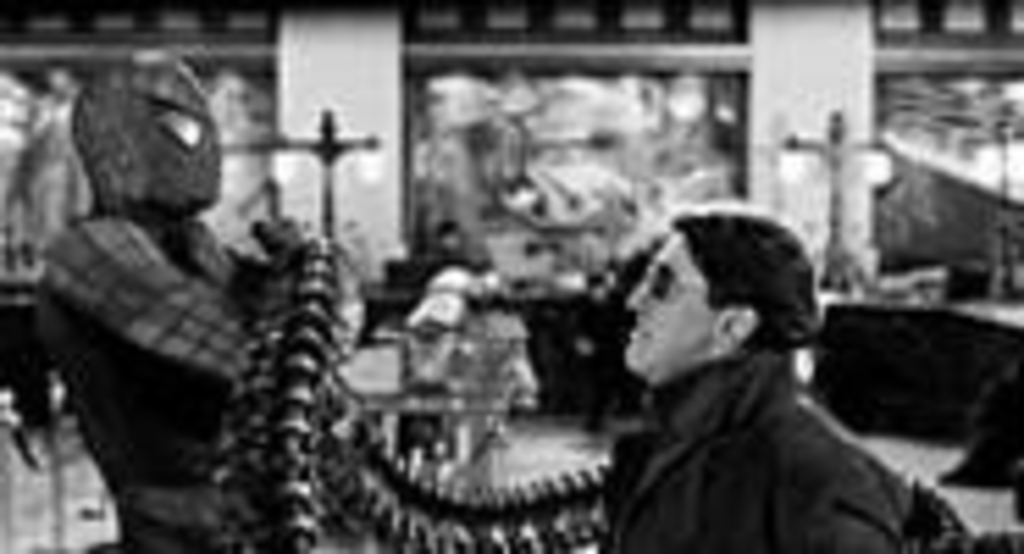 All you need to know about Spider-Man 2 is revealed in the opening credits, in which comic-book artist Alex Ross recaps the 2002 original in lavish, lovingly painted panels. Spidey and Mary Jane Watson are once again entangled in that now-iconic upside-down kiss; nutty Norman Osborn, out of Green Goblin garb, gnashes his teeth; a dumbstruck Harry Osborn discovers the web slinger standing over his old man’s corpse. The comics have become the movies have become the comics again, without one medium kowtowing to the other. The tiny panels don’t lose their shape when stretched to fill the expansive canvas of the cineplex, and the movie doesn’t condescend to the source material by treating it as something dinky or disposable.

Also divulged in the credits are the names of writers Michael Chabon (Pulitzer winner for the novel The Amazing Adventures of Kavalier & Clay, about old-time comic-book scribes) and Alvin Sargent (adapted-screenplay Oscars for Julia and Ordinary People), who love Spider-Man not just when he’s fighting the bad guy but also when he’s wrestling with himself. Imagine — a superhero movie in which the most meaningful battles are waged within the guy wearing the costume. It’s remarkable how, throughout these two movies, the makers of the Spider-Man franchise haven’t lost sight of creators Stan Lee and Steve Ditko’s original vision of an ordinary guy who’s “not too handsome, not too glamorous, not too graceful, not too muscular,” as Lee wrote in 1974’s The Origins of Marvel Comics.

Spider-Man 2, again directed by Sam Raimi, would have been unimaginable without Tobey Maguire, who was nearly replaced by Jake Gyllenhaal because of an injury. He’s the perfect Peter Parker and Spider-Man, exuding a sort of wide-eyed sadness throughout a film that’s as much about his unacknowledged love for Mary Jane (Kirsten Dunst) and his guilt over the death of Uncle Ben (Cliff Robertson) as it is his feud with the increasingly hostile Harry (James Franco) and his battles with old pal Doctor Otto Octavius (Alfred Molina), a mad scientist with four metallic tentacles fused to his bulky frame. Maguire is the only guy for the role. He possesses a rare mixture of vulnerability and potency; you’re always afraid this superhero will snap in half.

Whereas Peter was giddy with the discovery of his powers in the first film, he’s crushed by the weight of responsibility that comes with them in its far superior successor. Giving up Spider-Man, he believes, will allow him to be with Mary Jane, now a successful actress on Broadway. The writers have lifted a plot point from Superman II, in which Clark becomes a mortal for Lois, and cleverly expanded it. Peter’s only too happy to ditch the tights.

Alas, it’s impossible to play normal guy in love when there’s a madman on the loose in New York City. Molina’s Doctor Octopus makes for a horrifying bad guy: With “smart arms” that drive him bonkers, he kills for thrills and toys with his victims like an infant throwing dolls around a nursery. And Raimi digs filming him: A scene set in an operating room conjures the comedic terror of Army of Darkness, down to the use of a chainsaw, and the gory muck of Darkman. Yet he’s also a hard guy to hate: Spider-Man’s enemies always begin as Peter Parker’s friends or mentors, surrogate fathers for a kid raised by an uncle whose death he partly caused. They’re also scientists whose descent into villainy is sparked by a noble endeavor that turns horribly wrong. During their first meeting, a friendly encounter between student and would-be teacher, Octavius even lectures Peter about how intelligence is not a privilege but, rather, a gift to be used “for the good of mankind.” Molina gives Octavius considerable warmth and charm.

The first Spider-Man was charming but also a touch tedious, the curse of the origin story. The sequel is far more ambitious. It’s a two-hour epic that doesn’t feel long enough, sprawling but never messy, moving without ever turning maudlin.