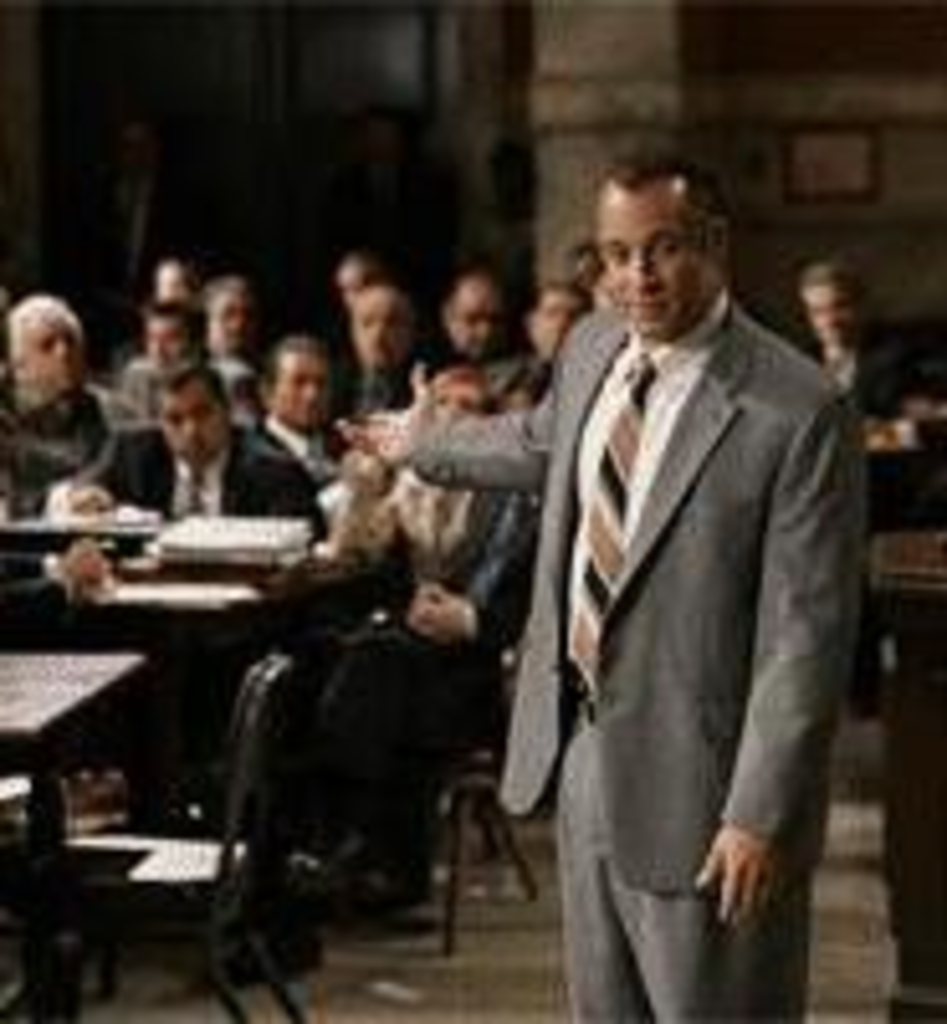 It’s a movie about the longest criminal trial in U.S. history, it’s directed by the legendary Sidney Lumet, and it stars … Vin Diesel in a wig? In a role originally intended for Joe Pesci? Can Lumet be serious?

Actually, no. The characters may be based on real people, with much of the dialogue culled directly from court transcripts, but Find Me Guilty plays the whole thing as comedy. As everyone knows, putting an egomaniacal movie star in a bad hairpiece is comedy gold. Just ask William Shatner, who to this day denies ever having donned a rug, despite all evidence to the contrary. Wigmaker Erwin Kupitz, stand up and take a bow — you may be responsible for reinvigorating Diesel’s stalled career.

Diesel plays Jackie DiNorscio, depicted here as a lovable fuck-up who describes himself as “a gagster, not a gangster” (the film’s least funny line, unfortunately repeated a few times just to make sure you heard it). He’s so amiable and so out of it that when his cousin Tony (Ra&uacutel Esparza) shoots him several times, he still loudly proclaims his love for the guy and refuses to identify him to police as the shooter. Left to his own devices afterward, Jackie is busted under the RICO anti-racketeering act, which, as he puts it, is used “whenever the government has no case.” He ends up in jail, having inadvertently slept through his own trial while his elderly lawyer blew it.

Offered a reduced sentence by prosecutor Sean Kierney (Linus Roache) if he’ll agree to testify against 19 other members of the Lucchese crime family, DiNorscio refuses, even though doing so will land him on trial alongside them, with the possibility of an extended sentence. But Jackie “ain’t no rat,” and besides, he figures that, unlike the others, he’s already in prison and can deal with it if he has to stay longer. That the rest of the family doesn’t like him very much — family head Nick Calabrese (Alex Rocco) threatens to cut Jackie’s heart out if he so much as says his name aloud — is never an issue.

Disillusioned with his previous attorney, Jackie decides to represent himself. His clumsily amusing antics proceed to charm the jury and aggravate the judge and lawyers. They’ll likely charm audiences, too, though the movie, based as it is on a trial of record-setting duration, occasionally wears out its welcome.

Lumet probably never again will be as good as he was in the ’70s (Network, Dog Day Afternoon, Serpico), but his work here with the actors is strong — particularly with Peter Dinklage as an overly mannered defense attorney; Roache, who hams it up dramatically; and Ron Silver, giving his best performance in a long time. But technically, the movie has some issues: A huge number of shots are framed so that the actors are seen only from the waist up, with the upper half of the screen as empty headroom, which feels less like a stylistic choice and more like the cameraman threw out his back and was stuck at an upward angle. The sets look cheap, and Diesel’s makeup appears to come and go from scene to scene — problems that could have been remedied by skillful lighting.

DiNorscio ended up running several illegal activities out of his prison cell, using a phone line he wasn’t supposed to have. Whether his humor on the stand was what turned the tide in the case is debatable, but he was certainly no angel. But that’s only a big deal if you take the film seriously, and whatever anyone says, it’s hard to imagine that you’re supposed to. Diesel has made so many bad movies lately, it’s easy to forget that he does have talent. Here, he reminds us all while cannily stepping away from the rote action shtick that made him boring.