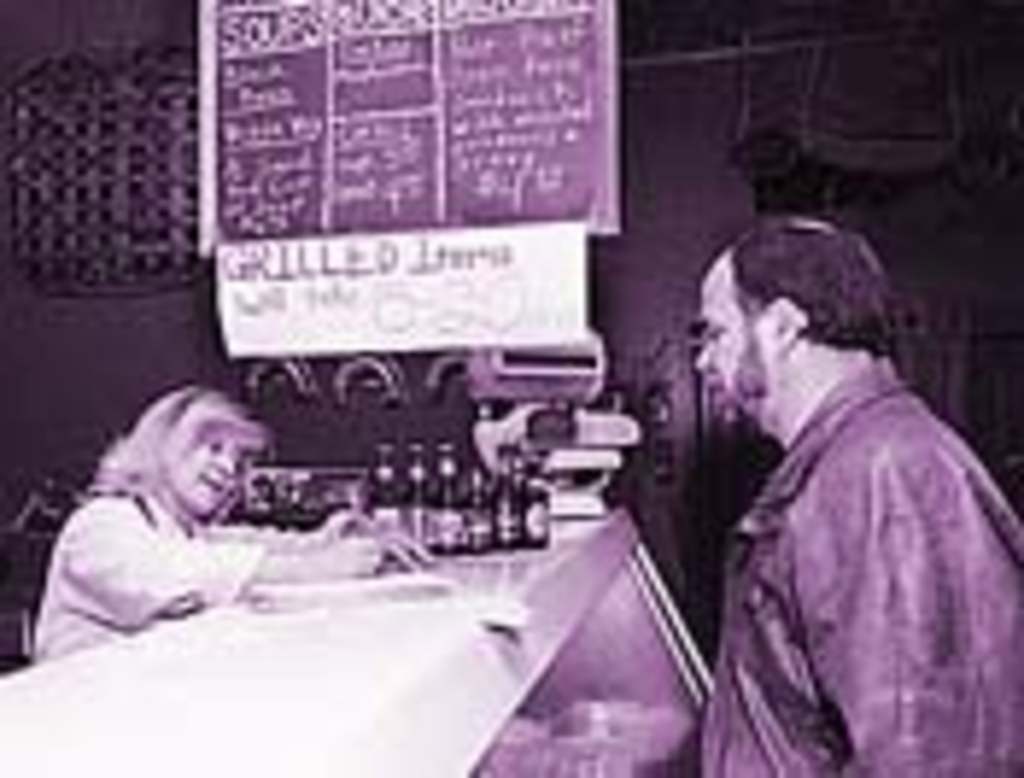 On one recent cold Saturday night, the Velvet Dog was noisy and packed with a young, brassy clientele. But on the south side of the street, inside R.T.’s Deli, only a handful of quiet customers sat around mismatched tables, eating hamburgers, baked chicken, or tapas to the accompaniment of an Earth, Wind & Fire song from the 1970s.

Hopping, it wasn’t. But as the night grew later, more people drifted in, including one raucous party of women whose infectious laughter gave the room some much-needed energy. Suddenly it was busy enough that the restaurant’s chef, Steve Williams, who had come out of the kitchen to help the lone waiter clear off tables, returned to his rightful place at the stove.

But through the huge plate-glass windows near our table, we watched the young and the restless scurry into The Velvet Dog without a glance in our direction. Ironically, several friends of mine insist that R.T.’s was “the hot singles gathering place in the early 1980s.” Now it seemed positively staid.

The deli is named for its owner, Robert Salsman, who in 1980 moved his catering operation to this block-long building (which at one time housed a drug store and, later, a chocolate factory) from a smaller building on 47th and Troost. At lunchtime construction workers, business professionals and bank tellers stand in line at the counter to order deli sandwiches or a meatball grinder, hearty (but bland) chili or hot soup (including a broccoli and three-cheese concoction that looked and tasted like wallpaper paste and,on another occasion, a potato soup that was floury and tasteless).

The dinner service, called “R.T.’s After Work” and offered 5-10 p.m. Wednesdays through Saturdays, was revived last summer after a long hiatus. Dinner patrons sit in the dining room and are served by a friendly, if frenetic waiter (“Why is he sweating?” Karen sniffed when the server came panting over to us. “He only has three tables.”)

The service could definitely use some tweaking. On two dinner visits, the waiter never asked if we wanted something to drink. We had to blurt out our requests as he was walking away from the table. But he was attentive enough after that.

R.T’s Deli brought back dinner service at the insistence of Williams, who designed a limited, but interesting, menu of sandwiches, tapas, pizza, and rib-sticking comfort foods, such as a slab of homemade meatloaf ($9.95) that tasted exactly like my mother’s — a description that may be damning it with faint praise. The golden oven-baked chicken ($8.95) was a better choice, a perfect hot dish for a cold night, served up with a hefty mound of real mashed potatoes and gravy.

If the concept of “comfort food” is rooted in coping with sorrow and pain by devouring big portions of lovable Midwestern dishes, R.T.’s is better than any therapist. (Cheaper, too.) Freud or Jung couldn’t match the good feelings evoked by R.T.’s big, cheesy square of lasagna ($9.95) stuffed with beef and Italian sausage. And who needs Prozac when there are oven-baked pork chops ($8.95 for a single chop; $12.95 for two)? Cured in the restaurant’s kitchen, the chops are prepared just like a nurturing grandmother would: with vegetables, spiced applesauce and curly french fries.

The portions for the four comfort dishes and the handful of other entree items, including a tender Veal Piccata lightly dappled with a lemony caper sauce ($16.99), are more than generous. Want comfort in stressful times? Eat more and feel a lot better about yourself.

Williams’ menu has more focus than the restaurant’s interior, an oddball melange of antiques and many framed photographs of events that Salsman has catered over the years (including a lavish spread at Nevada’s Liberace Museum). During one lunch visit, my dining companion looked up from his pastrami sandwich and stared at the photograph of a young bride and groom smiling broadly in front of their reception buffet table.

“I was at that wedding,” he said. “I can’t remember the food, but I know they’ve been divorced now for years.”

R.T.’s Deli started life as an Italian-style delicatessen, and the walls are still painted the color of a ripe Roma tomato and the tables draped with green vinyl tablecloths. But over the years, more antiques and bric-a-brac have been thrown into the mix. Salsman has filled glass-front display shelves with his collection of 2,500 cookbooks and filled the drawers of an antique cabinet with cloth napkins for the serve-yourself lunch crowd.

Once upon a time, there was live entertainment on certain nights in these dining rooms, which still boast cutesy names (“Pat O’Brien’s” and “The Creole Room”), but the days of the late Priscilla Bowman belting out jazz numbers went out with the singles scene. Today’s clientele, at least during the dinner hours, are neighborhood regulars, young families and couples looking for a quiet place to talk over a glass of wine and a spicy Thai Chicken Pizza ($6.95).

“It’s very cozy and homey,” announced my chic friend Karen, who had first eyed this main dining room, with its turn-of-the-century light fixtures, pressed tin ceiling, and large, dramatic flower arrangement with obvious disdain. Once she was settled down at our table buttering a square of spongy focaccia bread, however, she discovered a new fondness for the place.

“It’s like a little New York joint,” she said. “Unassuming, yet comfortable and friendly. And I love that there are crystal candle-holders on every table and none of them have candles in them.”

At R.T’s, the ultimate Cinderella restaurant, one must look past the unpretentious exterior (and the empty candle holders) and find the heart and soul of an old-fashion neighborhood restaurant. Go there more than once, and the waiter probably will know your name. And the food, served on heavy white plates, is as familiar as a lullaby. Have a side dish of macaroni and cheese ($2.50) with your burger or your steak. Or curly french fries to balance out an exotic sauteed shrimp and linguine dish ($12.95), all swimming in a fragrant broth of red peppers and lemon grass.

For those who still have room to sample a comfort dessert after plowing through all that self-affirming cuisine, there’s only one decent sweet offered, the house-baked custardy bread pudding with a light rum sauce ($2.25). It’s the kind of warm, grandmotherly dessert that conjures up pleasant thoughts of family repasts from the past.

And if R.T.’s Deli comes up a little short in the glamour department, there’s still hope: On my last visit, I’d swear I saw a handsome prince and a fairy godmother at a window table, sharing curried chicken spring rolls.