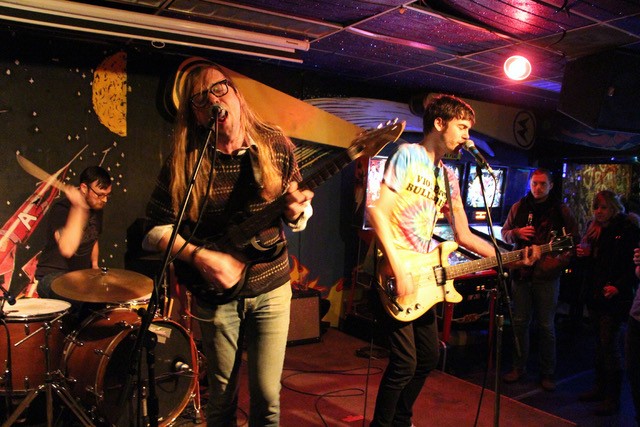 Rooftop Vigilantes at the Replay in 2012 // photo by Nick Spacek

Lawrence garage rock quartet Rooftop Vigilantes haven’t been a going concern since the early 2000s, but they’ve gotten back together to play the occasional reunion show. The quartet was omnipresent during their heyday, so it’s unsurprising that the band’s occasionally come out of hiding to put out unreleased material, including a third full, Let It Be, on High Dive Records in 2016. Now, we’re blessed with new tunes the band’s been sitting on for a decade, in the form of a digital 7-inch called Party Animal. I reached out to the band’s guitarist and vocalist, Oscar Allen Guinn IV, to see what this is all about.

The Pitch: What led you all to sit on these recordings for so long, especially given that you put out Let it Be in 2016?

Oscar Allen Guinn IV: The same reason we sat on Real Pony Glue — we had no-one to put it out! We incubated Let It Be until High Dive Records was kind enough to release it. we would’ve happily put all this stuff out sooner if that wouldn’t have required it to immediately disintegrate into the mist after squeezing itself through the cloaca of a Facebook post. The original hope was a 7″.

Was this a collaborative decision among you all — like, “Hey, people are stuck inside: let’s put out a record so they can rock”?

I love these songs and have always wanted to find a way to release them where they didn’t immediately drop off the edge of the earth; whether that would’ve been a cassette or 7″ or a video, we never figured out. The other guys posted it while I was out campaigning for Bernie, so I didn’t really have anything to do with that.

Zach Campbell [bass] said you recorded these songs in 2010. Does that mean these are Real Pony Glue outtakes, or something different?

Something different. Zach and I wrote way more songs than Seth [Wiese, drums] and Hannah [Hyde, kets] ever learned, and we learned way more songs than we ever recorded. Josh Thomas, who recorded the EP, is an old friend of mine from The Girl is a Ghost days and we banged these out over a few halcyon beers in Lee’s Summit.

Seriously, how can you sit on a song like “Lounge Suppressant” for a decade? It’s fucking perfect.

We played it at pretty much every show! I feel like the quality of the recordings really matches the tunes in a way we didn’t always luck upon.

Is there anything left in the vaults?

I think most of the good stuff has been *technically* released but that doesn’t mean anyone’s ever heard it: “Automatic Trash/Trouble Making Words” is 7″-only, “Prism Riot” is only on a comp. I guess stay tuned for the inevitable Greatest Hits Facebook post. We do have some outtakes from Carrot Atlas and the first sessions for Real Pony Glue, but I wouldn’t want to release them AFTER Party Animal as they’re good but not as good as these.

We do have a lot of weird demos and songs that we love but never finished. Maybe one day we’ll make it all the way through The Looking Onion.