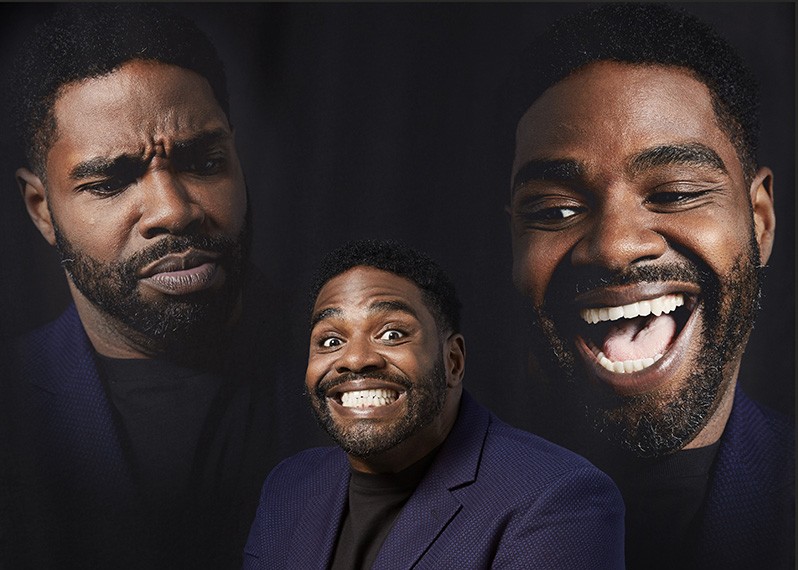 Ron Funches is one of our favorite comedians working today. The comedian and all-around gigantic personality aren’t just one of the best in the game, but he has the most infectious laugh in… the same… game. Funches’ sunny disposition pairs nicely with his work in the marijuana advocacy space which is the easiest line-in for our hearts.

You may recognize him from appearances on Chopped:420, voicing King Shark on HBOMax’s animated Harley Quinn show, and his new rule co-starring on Maya Rudolph’s new Apple + series Loot.

Funches plays The Comedy Club of Kansas City from Aug. 11 – Aug. 13. Tickets are available here. Ron was an absolute delight to talk to us about, , and ahead of that show.

The Pitch: How are you doing today, man? Are you on the road? I know your Minneapolis show is coming up.

Ron Funches: Yeah, no, I just got back from Phoenix. I was just taking a nap, and then my alarm went off to remind me to come talk to you.

I used to come watch the Undateable shows a lot when you guys would do standup after those live tapings.

I used to have a great time. I mean, it was a weird experience never doing a live sitcom, before you know, I only saw like when I was a kid watching that show Rock. So yeah, it was cool.

Just Saturday Night Live, really.  I mean, especially for me, I’m not having that many acting roles before that forced me to, like, you know, really learn my lines and learn stuff quickly.

Do you consider that kind of your acting school then, where you picked up your chops?

Yeah, that place. And then just, you know, my actual acting class, my coach, she’s really good and I’ve been working with her for years. So it just kind of cool now too, you know, with the the new show that, oh, there’s my alarm again to remind me to talk to you. 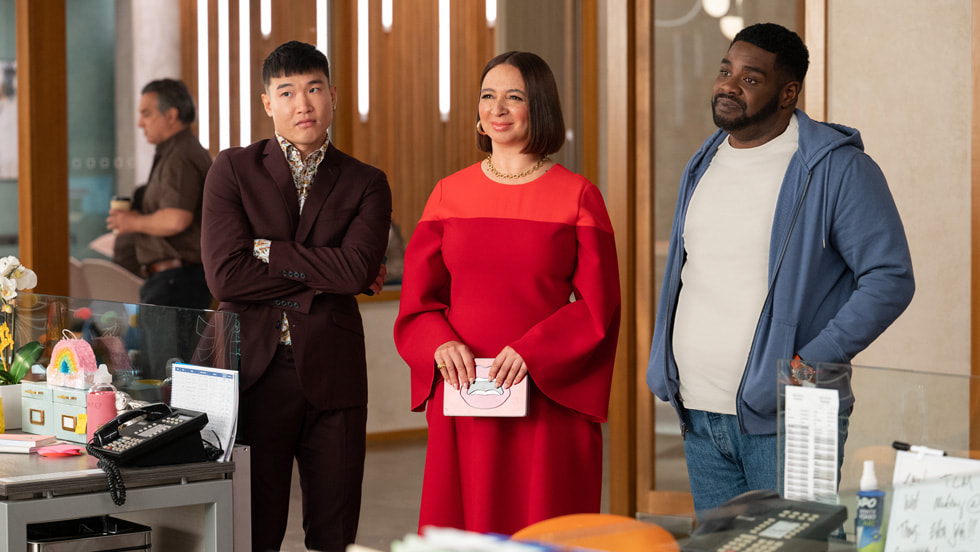 Talking about Harley Quinn, I’ve been a big fan of Justin Halpern for a long time, so that shows totally, very him and just wild and I love it. And then Loot got picked up for a second season, so that’s got to be exciting.

I got a new house recently, and it’s just it’s kind of stress where you’re like, Well, I need money no matter. And so it’s just nice to know where it’s coming from as opposed to being going out and having a hunt for it.

You have all the jobs right now. There’s the Getting Better podcast, but you also just started doing a live podcast for Spotify?

Yeah, I do a wrestling podcast with Spotify. It’s kind of like it’s pretty funny, but it’s basically like ESPN’s First Take, but just for wrestling and I bring home over guests like we had Rene Paquette and Danhausen and we just talk about the most important topics in wrestling going on. And we debate about it and let people call in and talk with us. The first one was really fun. I love when things don’t feel like work, you know, it just was it was like, oh, finally I get to talk about the dumb stuff that people told me to shut up about- the stuff my wife doesn’t want to hear me talk about, you know?

We have a local wrestling league here, which is a lot of fun to go to. It’s quite the experience, man. So I am curious, though, I know I think I’ve heard you on the podcast say that you very briefly maybe trained to take some wrestling classes, or was that something you were entertaining the idea of?

I went to wrestling school for a few months. Yeah. I had my first match in August of this last year. It was for this company called Game Changer Wrestling. I wrestled this guy named Tony Deppen. Danhausen came and helped me out.

I’m a huge Chopped fan. So when Chopped 420 came out, I was just like, this is right up my alley. This is incredible. Have you heard, is there going to be more of that or do you know?

They’ve been doing that merger between Discovery and HBO Max. So they just everything as far as their programming and stuff is put on the back burner. So I don’t know. I’m all but I’ll tell you one thing, I am right here willing and able to get right back to hosting a show about marijuana and edibles any time they want me to. It was an amazing experience and they helped me meet so many new chef friends that I now have and enjoy. And I tell you, I did not know this, but you want to have chef friends because they will cook for you and make you food. And it’s amazing.

What are your thoughts on edibles? I know a lot of people are divided. Do you prefer how you consume marijuana, are you open to all forms, or what’s your go-to?

There’s a time and place for everything. Sometimes I don’t have time for that. I need to get to work. I have things going on. But if I have a free day, why not? It makes it fun.

I enjoy the edibles, especially if maybe going to some event or something like that. You know, If I want to become a little Chatty Cathy. There are edibles you can take for that.

Exactly. That’s what I always say, because you know, some people, they can’t interact with people while they’re high at all. And I always told my wife it is the opposite for me. I’m more in my head if I don’t have a little bit of, you know, edible or something. If I’m at a big social function, if you get me at a dinner table and there are more than four people, oohhhh, I get antsy. I don’t like when conversations spin off in different directions. It feels weird to me. But if I have a little edible, I don’t care anymore.

In Missouri, we passed medicinal marijuana not too long ago. Hopefully, recreational happens, but you know it’s a step in the right direction.

It’s like we legalized medical weed and then took away abortion. So it’s just like, what are we doing here?

It’s a wild time all over the place. 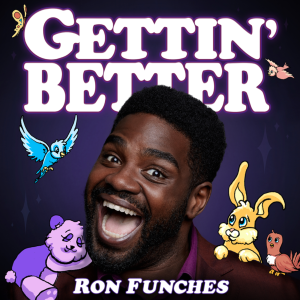 Why are we fighting?

In the world of delicious meats and sauces or dry rubs, smoke rings and just briskets and ribs, why are we fighting? Who among us is to say that a Memphis style is better than a Chicago style, Texas style, or Saint Louis style? They’re all friends to me. I want to have open borders in the barbecue wars.

Yeah. Let them reign free to my mouth.

It looks like Guy Fieri has a show coming out on your IMDB, and you are a guest on it.

Yeah. Oh, yeah. If Guy asks me to do anything, I will go because he is like real-life Santa Claus. He donates so much money. It helps so many people. And I mean, he’s kind of an inspiration to me and how he’s able to take something that he loves so much, like the food industry, and promote it and at the same time, you know, help so many people and make his own money. I think that’s amazing what Guy does. And he just has a new fun game show. It’s really silly. He’s playing with Bobby Moynihan and I believe. Who else? Bret Michaels. Bret Michaels was there. And so it was just a real party, like anything Guy does. Plus, when you go on one of those shows, you know the catering is going to be good. So I always go do stuff like that. He’s a great host. I can’t wait for people to see it.

Did you get to smoke weed with Guy Fieri? Is that a thing you can talk about?

I didn’t. I would love to, but he’s a businessman. He was working. But I feel like if I catch him after hours, I’m trying to get you know, it takes a while for a relationship to bloom, but hopefully.

Guy is great. I’m a fan of all his shows. I love him. You’re right. I think that he almost may be single-handedly kept the restaurant industry afloat during the pandemic. He raised so much money. It was insane. But he’s also very close to his son. And I know you’re very close with your son as well. So, like, is that something you’d like to emulate? Would you like to have your son be like your Hunter?

Oh, absolutely. I believe in nepotism all the time. Everywhere, every day black people say, hey, y you know, people should earn everything they get. I say, Why? Why? I work hard so my son can just half-ass it through life. That’s my plan for him. And I’m a, you know, I still discipline, still I’ll make him work hard. But I have to figure out a way to employ my son and help him get out on the right foot. Just, you know, because there’s nothing worse than I think we have the wrong viewpoint when it comes to like, you know, pulling up by your bootstraps and everybody starting off on from base one. You know, I want to help my son. But, you know, my son especially has Autism spectrum stuff. It’s a balance between how much I feel I need to protect him and help him and how much I need just to let go and let him show me that he can do things that I don’t even think he can do.

Have you ever walked out of a movie?

I just remember it being very weird. It was a real weird movie, and it was like supposed to be some avant-garde movie that everybody was talking about. And I just thought it was boring and stupid and I just left out of it. Also, the Teenage Mutant Ninja Turtles reboot. I slept through most of it, and then I woke up and saw a very realistic-looking Splinter, and I was like, ‘Oh, this is gross.’ And I left.

What was the last TV show you binged or watched a whole season of?

I did a rewatch of Breaking Bad with my wife. Yeah. Both fun and thrilling. And that last season will give you a heart attack.

What movie have you rewatched the most in your life?

Some movie I don’t think a lot of people know about, but it’s called Fear of a Black Hat. It’s a very fun mockumentary comedy that’s similar to CB4. And unfortunately, it came out at the right at the same time as CB4 and it didn’t have Chris Rock or Chris Elliott. So a lot of people didn’t see it, but it is one of the most well-written and hilarious movies I’ve ever seen in my life. It’s the most quoted movies in my life.

When you’re on the road in a hotel, what’s a show you’ll always watch when it’s on?

King of the Hill.

It’s also a good road show for me because my wife is not a big fan of adult animation, and she doesn’t like the theme song because of all the cowbell. And so that just that cowbell noise going off just reminds me of being on the road and being in a hotel, eating some edibles and some gummies, and just relaxing like that or I Love Lucy. I always watch I Love Lucy.